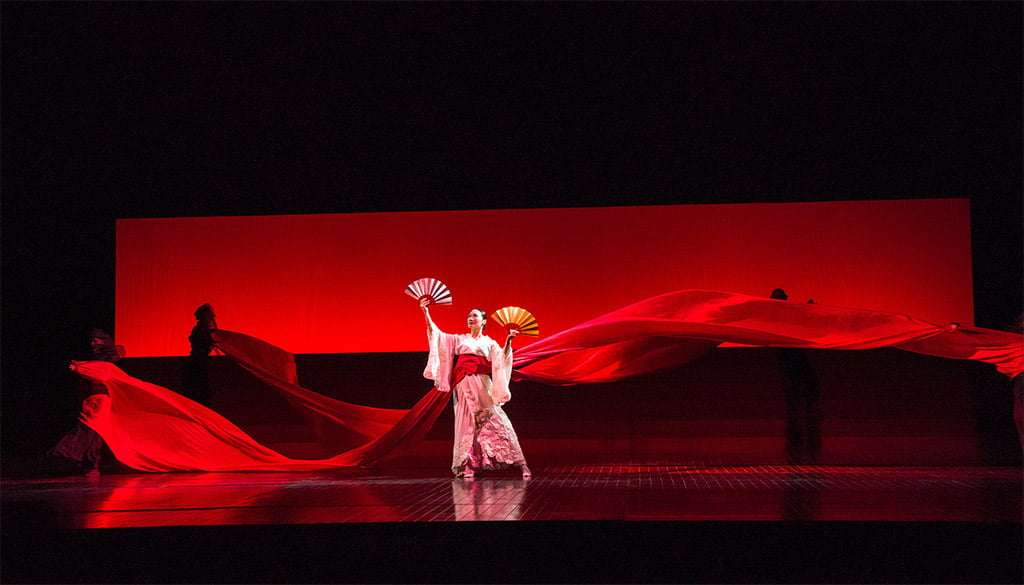 Who wrote it?
Curiously, given the position it holds in the repertoire, the premiere of Madama Butterfly at La Scala, Milan in 1904 was something of a fiasco. Puccini subsequently made many revisions to the work, notably shortening some of the first Act (and removing some of the detailed depiction of some of the title character’s relatives) and refining the content of the final one, dividing it into two distinct parts.
A few months after the Milan catastrophe the opera played to success at Brescia in Lombardy, and since then has established itself as one of Puccini’s most popular works. The demanding title-role has attracted the great sopranos of all eras since, and various arias and choruses remain favourites.
Madama Butterfly is based on a short play by David Belasco, which Puccini saw in London in 1900, itself based on a short story, Madame Butterfly, by John Luther Long. However, Long’s work was heavily influenced by the semi-autobiographical novel, Madame Chrysanthème, by Pierre Loti published in 1887. It is worth mentioning that the exotic and oriental settings were very much exploited in opera and operetta at the time, as was interest in the cultural heritage of countries like Japan. Puccini’s librettists were Luigi Illica and Giuseppe Giacosa with whom he had collaborated on the earlier La Bohème and Tosca. 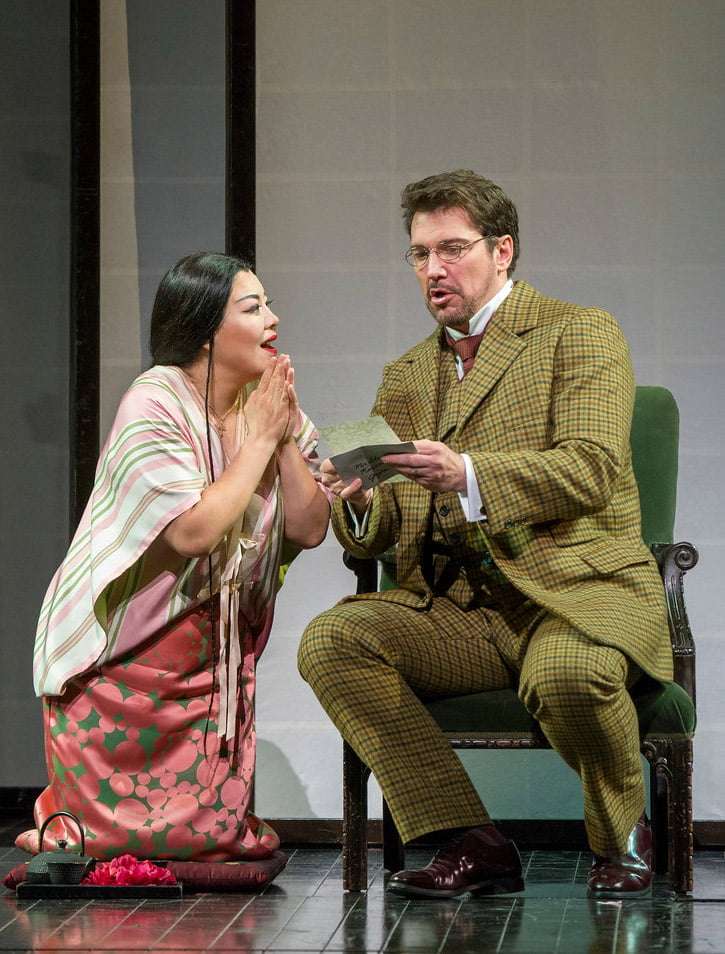 What’s it all about?
The opera is set in Nagasaki. Lieutenant Pinkerton of the US Navy has engaged the services of a marriage broker, Goro, to find him a casual bride. The girl selected is the 15-year-old naïve and impressionable geisha Cio-Cio-San (Madama Butterfly). On his behalf Goro has rented a house, complete with servants including the maid Suzuki, and made arrangements for the cheapest possible wedding. The American consul, Sharpless, has been invited. Sharpless is appalled when he discovers Cio-Cio-San’s age and when he realizes that Pinkerton has no intention of honouring the marriage once he leaves Nagasaki. During the ceremony it becomes apparent that Cio-Cio-San’s father committed seppuku as ordered by the Mikado, and that she has rejected her faith and converted to Christianity. Her uncle the Bonze, a religious teacher, appears unexpectedly, denounces her and orders all her relatives to shun her, leaving Pinkerton to reassure her of his love and protection.
Later Cio-Cio-San, now a mother, is living a meagre existence with Suzuki and awaiting the return of Pinkerton who had left before their son was born. She steadfastly believes Pinkerton will return although Suzuki, Sharpless and Goro doubt this. Goro has even negotiated and offered her a face-saving marriage to the wealthy Prince Yamadori. Sharpless, knowing Pinkerton to have married again, vainly tries to encourage her to marry but fails to tell her the complete truth. Butterfly proudly rejects the prince. A US ship is seen in the harbour. Cio-Cio-San and Suzuki decorate the house and remain on a vigil awaiting Pinkerton. He eventually arrives while Butterfly is resting. He now has a wife, and on realizing he also has a son offers to take the boy. Butterfly awakes, sees Kate Pinkerton and realizes the worst. She agrees to the deal, sending her son out to play, and then follows the ultimate steps of her father – with the same ceremonial sword she has kept in her possession. 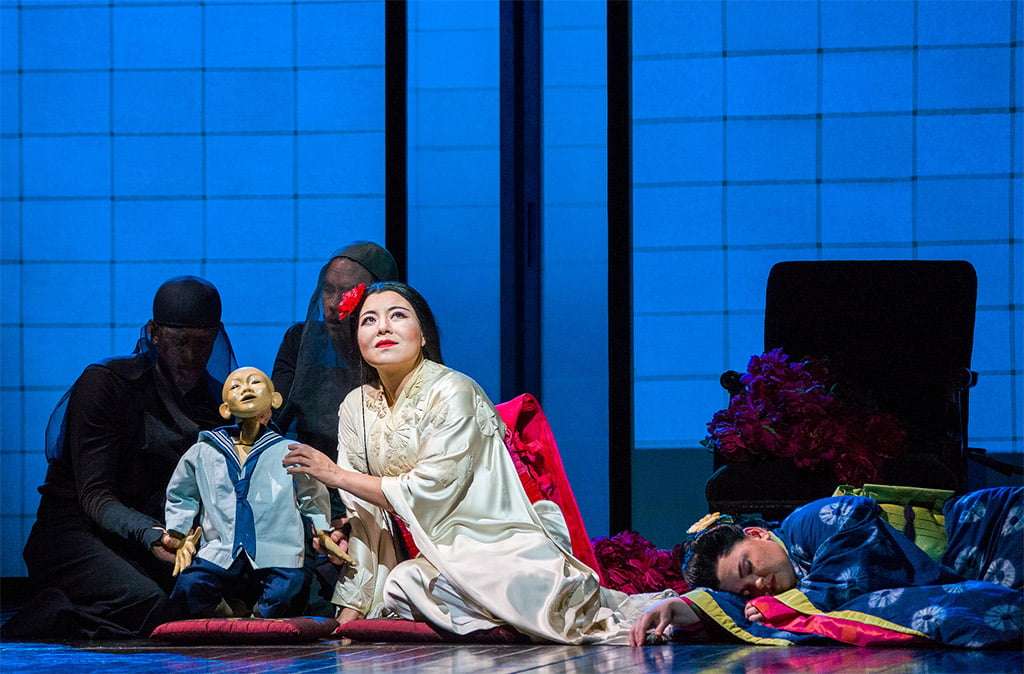 Look out for…
Puccini’s music and orchestration is a heady and romantic mix, and with the melodramatic plot concentrating on individuals in stressful situations it is a classic example of operatic verismo. The scoring has a lot of exotic colour to depict the oriental – there is use of genuine Japanese tunes and snatches from the ‘Stars and Stripes’. The ‘big’ number is Butterfly’s ‘Un bei di vedremo’ (One fine day) sung in heady anticipation of Pinkerton’s return. Other famous excerpts include the ‘Humming’ chorus, and the duet that concludes the first Act is a wonderful piece of writing – cleverly tempered by Puccini so that we cannot infer whether Pinkerton’s protestations of love are genuine, or rather more equivocal!

Who’s in it?
Chinese soprano Hui He takes on the demanding title role – she has much experience of Puccinian and Verdian and is a fine singing actress. Her Pinkerton is the Italian tenor Andrea Carè, making his Met debut. There is some luxury casting in the important role of loyal Suzuki with Elizabeth DeShong reprising her portrayal. Brazilian baritone Paolo Szot sings Sharpless. The conductor is Italian Peir Giorgio Morandi, a specialist of mid-to-late 19th- and early-20th-century Italian opera. The visually arresting production by the late Anthony Minghella is innovative in its use of image, colour, lighting and puppetry.

When’s it on?
If you are in New York City then Madama Butterfly is on at The Met itself; the live broadcast to cinemas is of the matinee on November 9th.