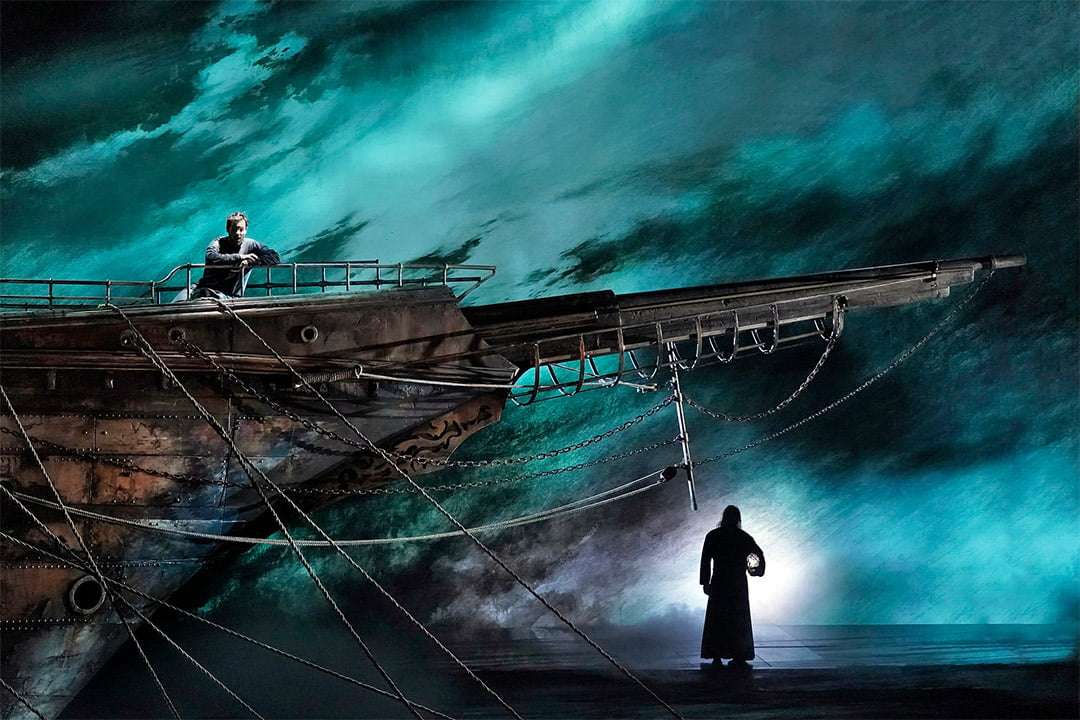 Who wrote it?
Der fliegende Holländer is the fourth of Wagner’s completed operas, and is considered by many to be the first of his works that really consistently shows his emerging highly individual style. He first started work on the opera in the summer of 1841, a good year or so before his third opera, Rienzi, received its premiere. The work was inspired by Heinrich Heine’s telling of an old tale as well as the composer’s rather trying experience of a very stormy journey by sea from Riga to London. The original intention was to write a short(!) one-act work for the Paris Opera. However, the director of the Paris House, Léon Pillet, bought the idea for the plot (Wagner was paid) but then commissioned a work, premiered in 1842, on the subject by the French composer Pierre-Louis Dietsch entitled Le Vaisseau Fantôme. Not to be outdone Wagner then set to work on a longer version in three acts, written as one continuous stretch of music and to his own libretto. Interestingly, Wagner did not fall out with Dietsch who conducted the Paris premiere of his next opera Tannhäuser. The completed Der fliegende Holländer had originally been accepted for staging in Berlin, but in the end the Dresden Hoftheater acquired the rights and staged the first performance on 2nd January 1843, although in three separate acts. Only in Bayreuth 1901, long after the composer’s death in 1883, was the continuous three-act version performed as originally intended by the composer. Nowadays opera houses have a choice which version to present; this Met performance plays the whole opera right through. If the opera isn’t Wagner’s most original work, it does have a raw theatricality to it and some great opportunities for singers, chorus, designers and directors alike. 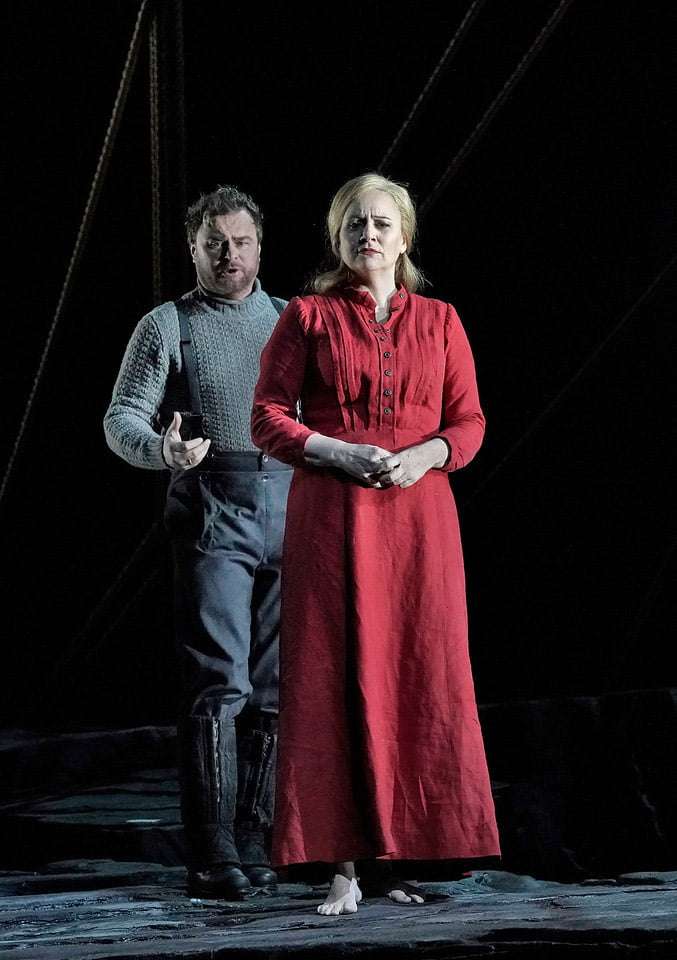 The story of the opera is a relatively straightforward one. Cursed for blasphemy the eponymous Dutchman is condemned to sail his ship with its spectral crew for eternity. His only chances of salvation occur every seven years when he can land and try and find a woman who will marry him and be faithful. As the opera starts, we are in a Norwegian harbour where a shipping vessel, captained by Daland, is taking refuge from a storm. A steersman is left to watch whilst the exhausted crew rest, but he drifts off to sleep in the darkness. Another ship pulls up, not waking Daland, the lookout or the crew. The Dutchman emerges and laments his fate. When Daland emerges, the two converse and the Dutchman asks if he has a daughter. On learning he does, the Dutchman offers Daland significant riches and the two vessels set sail for Daland’s home port.
As the scene changes, we meet the daughter, Senta, working with the ladies of the port who are spinning together. The overseer, Mary, berates Senta for her lack of commitment and her obsession with the tale of the Flying Dutchman. Senta’s friends ask her to sing her song about it, much to Mary’s chagrin. At the end of her famous ballad she asserts her love for this shadowy figure whom she hopes to redeem. As she does, she is overheard by the local huntsman, Erik, who has been courting her. He pleads his cause without much success. Daland enters with his sombre, silent guest. The Dutchman and Senta are immediately and intensely connected. Left alone they sing of his curse, her dreams and their mutual aspirations. She declares her love for him. All would seem to be going well.
The sailors with their families celebrate their return They become obsessed with the Dutchman’s ship and the apparent lack of crew. Drunkenly, they invite the mysterious sailors to join them, but when the ghostly crew do appear a mad panic occurs. Senta enters pursued by Erik who again declares his love. The Dutchman overhears the end of their conversation, assumes faithlessness and flees. Senta tries to follow but is restrained by Erik. The Dutchman publicly reveals his identity and orders his crew to set sail. Senta extricates herself from Erik’s grip, runs to the top of the cliff and throws herself into the sea declaring her fidelity. The Dutchman’s curse is finally broken.

Listen out for…
From the opening bars of the overture the stormy sea is omnipresent; you can almost feel the surge and swell of waves, the wind and the rain. It is in this score that Wagner’s leitmotifs (themes) start to emerge as one of the most original aspects of his operatic writing. They represent people, emotions, objects and so forth. Both the Dutchman and Senta have recognisable tunes associated with them, as does her obsession and his final redemption. There are some great set-pieces including the Dutchman’s monologue, ‘Die Frist ist um’, a flexible expansive recitative-like aria. Senta’s ballad is a demanding sing; it’s treacherously high and intense but offers a great dramatic singing-actress the chance to really set the stage on fire. The love duet is more quietly intense to start, as the two almost murmur their own thoughts, only coming together in true duet at the end. There’s tremendous brio, excitement and thrillingly direct choral writing when the two nautical crews meet, and the final trio between Senta and her two lovers is propulsive to the final bars of the work. It should pick you up at the start and drop you in your seat at the end. 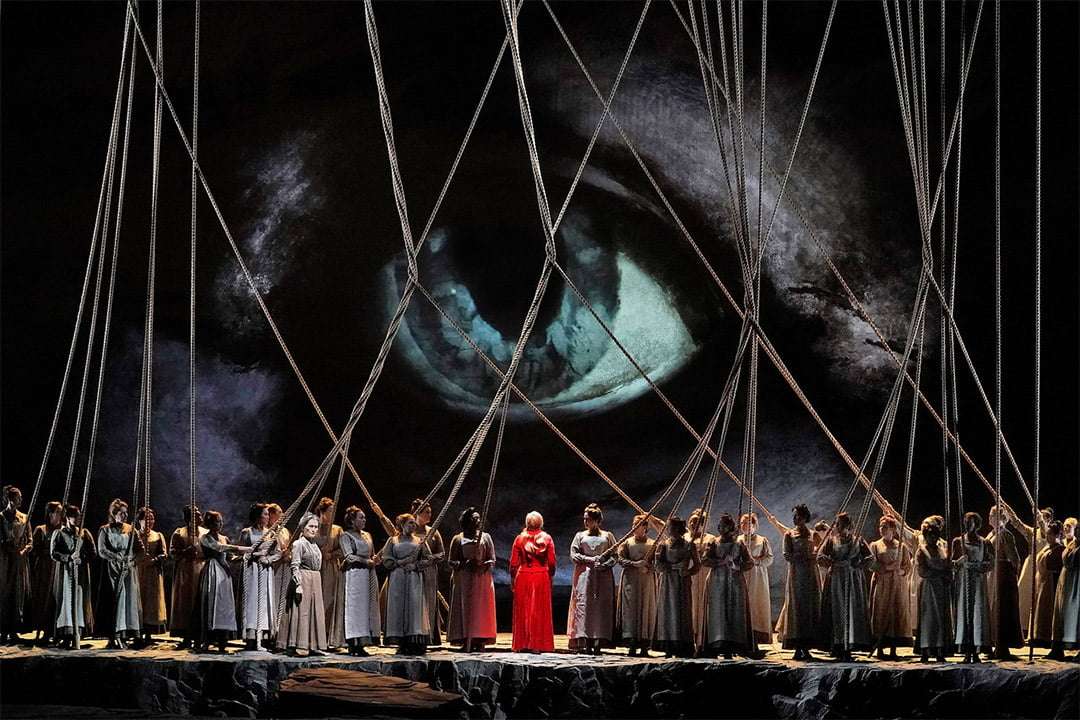 Who is in it?
Despite several cast-changes owing to accidents before rehearsals even started, The Met has assembled a cast of notable Wagnerians for this staging. In the title role is Russian baritone Evgeny Nikitin whose magnetic stage presence, virile and incisive voice should be heard to great advantage. As the driven Senta the German soprano Anja Kampe, notable for her theatrical, grand-scale interpretations of roles such as Senta and Isolde, should thrill vocally. She is making her Met debut in these performances. Luxury casting in other roles too. Daland is sung by the sonorous German bass Franz-Josef Selig, Mary by mezzo-soprano Mihoko Fujimura and Erik by heroic tenor Sergey Skorokhodov. At the helm of the ship that is the Metropolitan Opera Orchestra is Valery Gergiev. The new staging is by François Girard, whose recent Parsifal in here was highly acclaimed.

When’s it on?
If you are in New York City then the matinee is live at The Met itself. Otherwise it is broadcast to cinemas on March 14th.