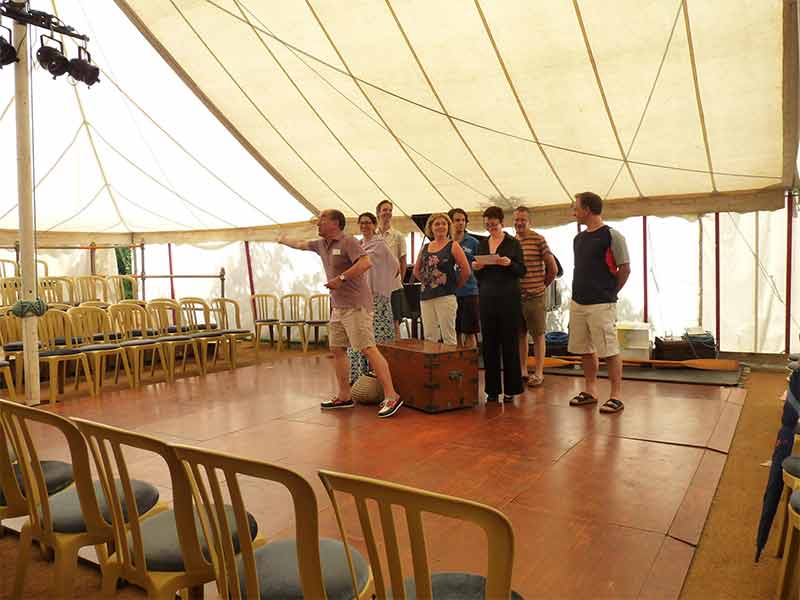 As it has done for eighteen seasons Diva Opera returns in July to Domaine des Vaux in the parish of St Lawrence, Jersey (that’s not New Jersey but ‘original’ Jersey – the Bailiwick – one of three Crown Dependencies, a jewel in the silver sea off the coast of Normandy). The 28-year-old festival is the creation of the indefatigable husband-and-wife team Marcus and Anne Binney, in aid of the Durrell Wildlife Conservation Trust, for which £500,000 has so far been raised, as well as for other good causes.

Here is a musical celebration full of life and supported by the local community. During 2014 (14-17 July) there were two performances of Don Giovanni, one of Les contes d’Hoffmann, and a nautically-themed Opera Gala, and a great success was made.

I attended all performances except the first Don Giovanni. Housed in a lovely temporary canvass marquee in the grounds of the Binneys’ home, the performing area is small but absolutely adequate for the 120-or-so in the audience, with seating flanking three sides of the performance space. Intimacy is the prevalent feeling, and with singers at spitting distance from one, it is a powerful and arresting operatic treat. The back wall is where the piano is – played superbly on each occasion by the indefatigable Bryan Evans – and the singers enter from any of the four corners, in full costume, for properly staged performances.

Don Giovanni can be a long evening, but here it flowed, each episode adding to the inherent drama. Sung in Italian, if with no accompanying translation, the story was nevertheless clear because of the intimate and up-close-and-personal nature of the staging. Matthew Sprange was a wonderful Leporello, and I really enjoyed the divertissement provided by Joanna Foote’s Zerlina and Julian Charles’s Masetto. But it was Changhan Lim’s Don G that dominated, his cool exterior utterly seductive, and his viciousness the embodiment of evil. His defiance of Il Commendatore was heroic. The performance was a triumph of story-telling and music-making.

The same was true of a terrific account of Hoffmann, the dream sequences realised superbly. Michael Bracegirdle was every bit the world-weary poet, and text dripped from his lips with insouciance, the Prologue delicious in this respect, and evoked the smoky atmosphere of a devilish den. Mary O’Sullivan sang the inhuman mechanical doll Olympia with an equally inhuman ease!

The themed Gala was a stroke of genius and a lot of fun. Noël Coward, Gilbert & Sullivan, and Rodgers & Hammerstein sat well alongside Rossini, Rimsky-Korsakov and Bizet.

This year’s Festival offers three nights of opera embracing Donizetti’s Lucia di Lammermoor, Mozart’s Le nozze di Figaro, and a Gala on the theme of “Sentiment, Satire and High Society”. It promises to be an absolute treat, and I look forward to a very high standard of performance – just as I heard last year.