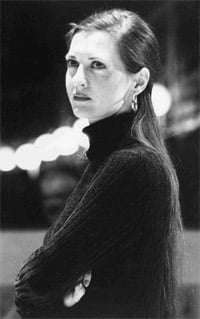 In 2007 I interviewed Franz Grundheber when he was appearing at Covent Garden in the title role of Verdi’s Rigoletto and he described the singer taking the role of Gilda as “super”. That was Patrizia Ciofi who had made her Covent Garden debut in 2002 in that very part. Following her appearance in 2008 for The Royal Opera as Donna Anna in Don Giovanni, Patrizia now plays Gilda once more in what is the fifth revival of David McVicar’s production, which was first seen in 2001. In 2010, Rigoletto is shared between Dmitri Hvorostovsky and Paolo Gavanelli, and Gilda between Ciofi and Ekaterina Sadovnikova.

However, before discussing this work and Patrizia’s latest appearance in it, I ask about her family background and the events that led to her professional debut in Florence in 1989. “My family was a very simple one. I was born in a little place near Siena called Casole d’Elsa and nobody in my family was a professional musician. Life in an Italian village was not of the easiest, especially after the Second World War, and my father had to make a living without relying on his musical talent which was in fact considerable. He studied the violin for seven years and could also play the clarinet, the trombone and the piano. Indeed music was in my family’s blood: we would all sing and they supported me when one of my teachers at school noted my voice and suggested that I should study singing properly.”

Patrizia graduated in 1989 from the conservatory in Livorno. Prior to that she studied both in Siena, where she enrolled in the Rinaldo Franci musical institute, a private school without subsidy from the state, and in Fiesole at the Accademia Chigiana. But arguably the most important step in her development was finding in Siena a teacher outside the institute who understood her voice and who proved inspirational. This was the Polish soprano Anastasia Tomaszewska-Schepis. “I totally fell in love with her and wanted to sing just like her. And then, when beginning to build a repertoire, I listened to a lot more music and at that stage it was singers like Callas and Scotto who became my inspiration. With them especially it was not only the sound of the artist that interested me but their acting, the way in which they inhabited the roles that they were performing. But it was in effect my teacher to whom I was once again indebted when it came to my first stage appearance. She was contracted to sing a Bach piece for the Teatro Comunale in Florence and it was a work that contained a role for a second soprano. She was asked to bring along one of her pupils to perform this part and I was the one that she chose. When the theatre heard me they liked me enough to suggest that I should appear in their staging of Gino Negri’s opera Giovanni Sebastiano”. 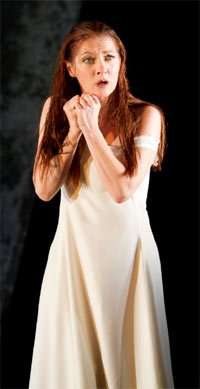 Starting out with this rarity, Patrizia has had international success with repertoire that ranges from Giulio Cesare to Der Rosenkavalier and including the roles of Susanna and Donna Anna, and there is no doubt as to what takes the central place in her work. “The focus on the Italian repertoire comes from my being Italian, but also from the fact that my voice is well suited to it: it just fits my way of performing. But I love too French opera: my future plans include my debut in Roméo et Juliette which will be a challenge for me, but that repertoire is one that I would like to explore further. That’s because I have a curiosity about music and like to make changes – from one opera to another and from one house to another. I am pleased to say that I’ve done almost a hundred roles, and my only real regret is that some operas, Rossini’s Otello for example, have come my way only once. I’m inclined to feel that intense, melancholic roles suit my voice best of all, but quite apart from my love of singing I have a passion for theatre: that’s why I like to alternate and to perform some comic roles, such as those by Donizetti and Rossini, as well as the more serious roles that enable you to show your acting skills that little bit more. As for roles that might come along in the future to fit the maturity of my voice, Verdi’s Luisa Miller is certainly one that comes to mind.”

Since Patrizia has appeared in Paris and in every major house in her own country as well as in London, Vienna, Madrid and Barcelona, I ask if she is aware of differences from one country to another. “Yes, there are differences, and I do prefer to sing in places that I love, places where I have been before and where there are people that I regard as friends. The atmosphere in the theatres and the relationships that I am able to build up within the working environment are important to me. It really makes a difference. There’s also the question of languages: because I speak French and Spanish fluently I feel more at home in those countries through being able to communicate easily with the people there. I love the United Kingdom but there is a little bit of a barrier due to my English being less good, which is why I am using an interpreter for this interview. But when it comes to the audiences, I believe that what you try to express does get out there: I feel that I am communicating with the audience no matter which country I am in, and to be able to make myself understood in that way makes me extremely happy.” 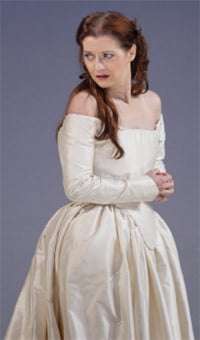 Gilda has become a signature role for Patrizia for, in addition to her Covent Garden appearances, she has featured in productions in Vienna, Berlin and Madrid, while next year she will be singing the role at the Orange Opera Festival in France. However with her return now to David McVicar’s staging, supervised as in 2002 by its choreographer Leah Hausman, Patrizia feels particularly at ease – and the more so because McVicar was present on Patrizia’s first return in 2007 enabling him to give further thought to the production and bring fresh ideas. “This time I was temporarily indisposed during some of the rehearsals but what I did in 2007 was immensely helpful in that situation. The sets and costumes were familiar to me and, being comfortable in this production, I was able to follow my instincts born out of what I remember”. It’s also clear that Patrizia is very much in sympathy with McVicar’s approach, one which brings out the decadence of the court setting in which much of the drama is played out. “That focus on the baseness and vulgarity of the court is an aspect present in many other productions too, but David doesn’t just catch arresting details here and there: it’s all very real, very much a thing of flesh and blood, and there’s so much passion in the way that he has realised it. I like that because the ugly aspects are so much a part of the characters, Gilda being the only person who is pure and beautiful.”

As a way of leading into a detailed discussion regarding Gilda’s character, I ask Patrizia about the view she takes of the work given that the story of Rigoletto contains so many diverse dramatic aspects. When Rigoletto the court jester discovers that Gilda his young daughter has fallen in love with his philandering master the Duke of Mantua, a man capable of taking advantage of her, he seeks revenge against the seducer. This he does by planning to have the Duke killed and consequently it is the theme of vengeance which drives the plot and which leads to an outcome which involves both sacrifice and tragedy. But important as the depiction of the dissolute court is and strong as the contrast is between the Duke’s lustful duplicity and Gilda’s fidelity, many feel that the heart of the drama lies in the relationship between father and daughter, itself a complex mix: there’s devotion and care but also, on widower Rigoletto’s part, an over-protectiveness which shades into possessiveness.

Given this rich array of material, where for Patrizia is the central focus of the drama? “I agree that the love between father and daughter is a key thing, but what strikes me forcibly is that Gilda is the only character who changes in the course of the opera. I find in her experiences something that relates to our current world: the way in which women were treated then and how in some societies they may be treated now so that the only way out for them lies in sacrifice or death. As I see it Rigoletto’s love for her is not something that is wholly desirable and to be trusted. There is affection there but it’s a relationship in which the man, her father, is somebody with power who wants to impose submission. Unfortunately for Gilda when she meets the Duke she meets the wrong man, but that doesn’t alter the fact that she needs this other love in order to free herself from the imprisoning love that her father gives to her. In performing this role I’ve come across singers playing Rigoletto who go for the sweetness in his character and can’t conceive that he could be bad for her. But Dmitri Hvorostovsky finds certain violent elements in his interpretation which I welcome because that helps me to bring out Gilda’s strength and what I feel about her situation.”

As these comments suggest, Patrizia finds Gilda a very rewarding role although it does, in a sense, have one drawback for her. When Gilda finally appears in Act One Verdi gives great opportunities to the singer to present the character in the round and also in scenes that contrast the court bustle and the chilling encounter between Rigoletto and the assassin Sparafucile. However, Gilda’s entry comes almost half-an-hour into the opera and Patrizia finds a late entrance nerve-wracking. “I just can’t stay backstage listening to the other singers, which is why stage managers get a bit worried about me. They can never find me because I literally go out at the last minute and the longer I have to wait the worse it gets. But once performing as Gilda everything flows very naturally. That’s true of the vocal aspect but also of the development of the character. She grows from being very ingenuous in her love for her father and ignorant of the world and then experiences love for the duke and becomes a woman. Utilising your acting ability you can express these changes, these developments, in the most natural way and to express it fully you find all the appropriate colours that will bring it alive.”

When taking a role that ends in tragedy, it might be that the artist finds themselves becoming overly absorbed in the role. Does this happen to Patrizia? “That depends: some nights are perhaps more inspired and on others you focus more on the technique. But normally it does take me quite a while to get out of the character. Of course, to allow yourself to become completely caught up in the role every time would be to shorten your life. Even so, I do like to be passionately immersed in the character.”