“Sung by candlelight, Ex Cathedra’s atmospheric Christmas concerts are aimed at the heart of the season and have become a very popular festival tradition. A seamless stream of music from best-loved favourites to hidden gems and stunning new works are complemented by a selection of readings, which together capture the meaning – and humour – of Christmas.” [St John’s website] 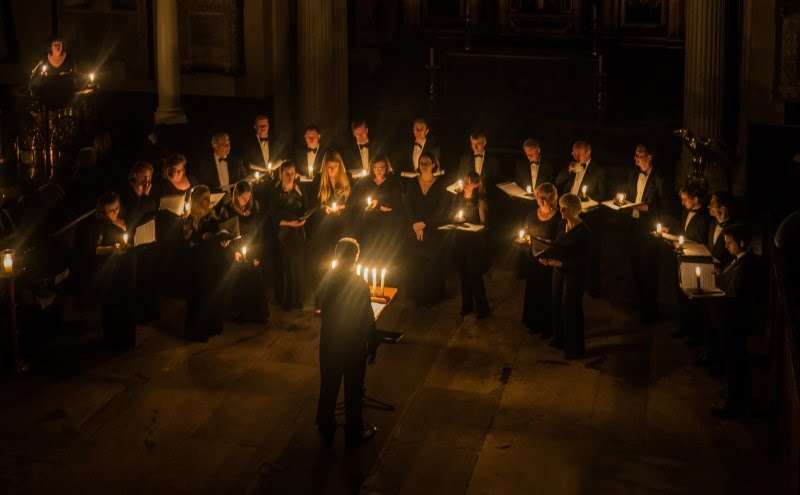 Behind Ex Cathedra’s prosaically titled “Christmas Music by Candlelight” lay a wealth of choral and spoken delights – drawn from two centennial anniversaries – women’s right to vote and Armistice Day – the whole thoughtfully-packaged and directed with assurance by Jeffrey Skidmore. This was no regurgitation of perennial favourites but mostly an encounter with the new and lesser-known. When the familiar did appear (Away in a Manger, The Lamb) it left an indelible impression, and what a joy not to endure another round of Rutter or Chilcott, an evening in which one could sample a selection of fine wines.

Talking of wine, there was the awed wonder of Stars by Ēriks Ešenvalds – for choir, six wine-glasses and Tibetan bowls, the majesty of a new-born child evoked with shimmering luminosity and gloriously sung. If this wine was on the sweet side, then drier vintages came with Parry’s My soul there is a Country – Skidmore coaxing warmth of tone and neatly underlining “And One, born in a manger” with a slower than usual tempo.

That this programme was concerned more with text than music was evident in Peter Warlock’s truncated Bethlehem Down – reduced from the usual four to two verses, yet still making an impact, and the final stanza only of Harold Darke’s In the Bleak Midwinter, the emphasis laid bare on love and giving. Any absence of snow mattered not as immediately before there had been Sally Beamish’s carol In the Stillness portraying the hushed rapture of a parish church in a snowbound landscape and sung with intoxicating beauty. So too Lauridsen’s O Magnum mysterium, and if we were short-changed by the brevity of its final chord, there was no mistaking the intensity of the radiant singing.

Roderick Williams’s O Adonai was captivating, distantly placed sopranos and baritone Greg Skidmore adding to its striking beauty. Equally atmospheric were works by James MacMillan and Alec Roth; for the latter’s Men and Angels (2014) Ex Cathedra was on exceptional form – clarity of words and security of intonation superlative. Rupert Jeffcoat was an ever-sensitive accompanist, fully deploying the organ’s rich colours in some splendid improvisations.

Skidmore’s imaginative and adventurous programming was welcome. That said, the absence of texts was disappointing, and while the idea of segueing from one carol to another, or from choir to reader, was smoothly rendered (and without applause) more time would have been appreciated to absorb the impact of each contribution. Niggles aside, this was an evening of fine music-making, a prized-collection of seasonal treats, superbly gift-wrapped.