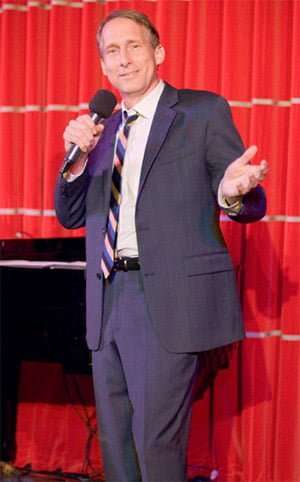 An accomplished baritone, Gregg Edelman has appeared in fifteen Broadway musicals and has been nominated for the Tony Award four times (“My brother calls me a four-time loser”, he states wryly). He also acts in films (Spiderman 2) and television (30 Rock). His performance at The Crazy Coqs makes plain his appeal for Broadway producers. He sings with commanding style, his smooth timbre allied with beautiful enunciation and superb use of dynamics. He can be forceful when required, as in Sondheim’s angrily assertive ‘Everybody says “don’t”’, or caressingly romantic, as in Lerner & Loewe’s ‘If ever I would leave you’.

His sense of drama invests his programme with passion and humour, the latter on display in his treatment of Schwartz and Dietz’s ‘Rhode Island is famous for you’, for which he prompts the audience to join in with the mischievous final choruses (“Pencils come from pencil-vania”). He relates that he turned down a role in the Broadway production of Les Misérables, but some years later he took over the role of Javert, cueing a persuasively passionate rendition of a number the character Jean Valjean sings in the show, ‘Bring him home’. Edelman’s Tony nominations were for performances in City of Angels, Anna Karenina, 1776, and Sondheim’s Into the Woods. Edelman’s emphasises that Sondheim is not the dour figure he appears to be many photographs, but a witty man with a great sense of fun. His words are heard in Edelman’s opening medley of ‘Tonight’ and ‘Something’s coming’ (from West Side Story, music by Leonard Bernstein), and later he sings ‘Send in the clowns’, the great ballad that is rarely performed by a male vocalist. He tells that when he was cast in City of Angels, composer Cy Coleman asked him how long he could hold a note before writing ‘I’m nothing without you’ which requires a sustained close.

Edelman’s evening includes a rarity written for him by Kander & Ebb for the 1987 revival of Cabaret. The hero Cliff had originally performed a solo, ‘Why should I wake up?’ (which Edelman sings beautifully), but the libretto had been largely re-fashioned to reflect changing attitudes and the song no longer suited his more complex relationship with Sally Bowles, so the new number, ‘Don’t go’, was sung by Edelman during the revival, but never heard again. It is a fine song. He also introduces two little-known numbers by a songwriter he champions, Barry Kleinbort, a rousing ‘Love me, love me’ and a plaintive song of reminiscence, ‘Time’. Songs of greater familiarity with which he delights us, ably accompanied by James Church, include James Van Heusen and Johnny Mercer’s ‘I thought about you’, the Gershwins’ ‘They can’t take that away from me’ and ‘Love is here to stay’, and Cole Porter’s ‘At long last love’. Another Porter creation, ‘In the still of the night’, begins with the middle section sung unaccompanied, a beguiling prelude to a perfect interpretation of one of Porter’s finest melodies. This engagement is Edelman’s debut performance in London, hopefully the first of many.