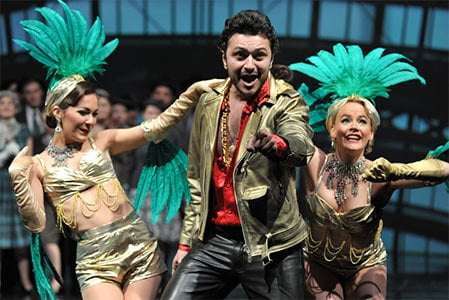 La Vie Parisienne could be seen as a lighter-hearted parallel to The Marriage of Figaro, with its sending up of the central aristocratic figure in search of a little French ‘ooh-la-la’, which he did not get at Harrow (as we are told in this version, originally in five Acts, revised by Offenbach himself to four, and which is here down to three). The operetta does not carry the biting political satire of Figaro but revels in the hedonism and excess of Parisian night-life while poking gentle fun at its superficiality.

This highly professional production by the Royal College of Music brought appropriate and unstinting vibrancy to the stage, not only in the costumes and sets, but also on the part of the student singers. It appeared to be set in the 1950s – just at the time when austerity elsewhere in Europe made the sensuous allure of Paris all the more potent – but given it moves to the Moulin Rouge in the final (third) Act, the fancy dress, revealing costumes and generally louche atmosphere of a fantasy Paris could have placed the action at just about any time since the middle of the 19th-century. (Originally this operetta was placed in the Paris of 1866, contemporaneous to its creation.) 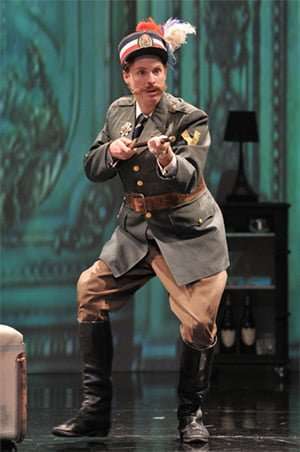 The English version of the libretto used here is generally idiomatic, playing upon English turns of phrase, customs and manners, turning the work into a wry examination of the English character – and its relationship to foreignness – by making the central aristocratic couple into Lord and Lady Ellington and re-igniting old cultural rivalries between the two sides of the English Channel. Some transpositions did not quite fit, though the use of slang terms on the part of those purporting to be foreign was amusing. The troupe of singers, who so clearly enjoyed performing, brought out all the fun without seeming mannered or tiresomely camp. Only Vasili Karpiak as the millionaire Brazilian sometimes failed to make his diction clear, though having to imitate a Latin-American in a language presumably not his first (Karpiak having been born in Belarus), this was readily forgivable. His portrayal of the vulgar nouveau riche playboy was unabashed and hugely erotic.

There was indeed innuendo aplenty in words and actions. This proved sufficient in extent to suggest the salacious undercurrents coursing just underneath the surface, without descending into smut. A good example was Lord Ellington’s number ‘I’ve a lot of catching up to do’, with various word-plays on “up”, as he contrives to make an assignation with Metella, aided and abetted by Gardefeu, albeit duplicitously. As Gardefeu, Peter Kirk brought verve and swagger to carry off the part of the rascally boulevardier who seeks to show up Ellington. Unfortunately Hannah Sandison, as his sidekick, Metella (whom he is also pursuing), did not have quite as much charisma – although she conveyed haughtiness, she might have been better cast as the frumpish Lady Ellington.

A better match for Kirk was Luke D. Williams as his friend and rival for Metella’s affections, Bobinet. He exuded similar nonchalant machismo, but ultimately to no avail as far as Metella is concerned who becomes reconciled to Gardefeu. Filipa Van Eck’s Gabrielle, posing much of the time as an Austrian colonel’s widow, was a real soubrette with a sparkling and exact vocal technique to make her role convincing. Rosemary Braddy and Morgan Pearse as the Ellingtons demonstrated an English naïveté in the face of Parisian mores – for all the Lord’s assumed bravado – that correctly set them apart, dramatically, from the more knowing manner of the other characters. Matt R. J. Ward’s witty performance as Frick was memorable, not only for his straight characterisation as a shoemaker but particularly for his disguise as a pompous major-general – fully the equal of Gilbert & Sullivan’s famous old buffer from The Pirates of Penzance.

Michael Rosewell’s conducting ensured that the orchestra maintained a lively pace. Occasionally the accompaniment sounded a little thin, but at other times there was plenty of colour and fizz, especially in the ensembles. Kay Shepherd’s choreography was no small achievement, managing to be lavish and unfussy. Moreover, effective use was made of a thrust stage around the orchestra pit, allowing the action to come forwards amongst the audience, thus breaking down the barrier between stage and spectators. If operetta floats your boat, this production (with changes of cast) is worth catching, and gives the professional houses a run for their money.