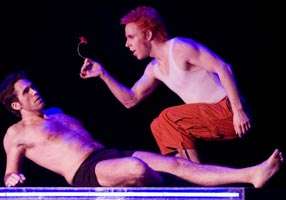 Olivia Fuchs’s production of Britten’s only setting of a play by Shakespeare was first seen at the Linbury Studio Theatre in 2005. It is a deeply thoughtful and affecting staging, which succeeds by relating to the opera’s weaknesses. Britten and Peter Pears slashed the play’s text by half, and managed by intent, one imagines, drawing almost all of its dramatic energy and impetus. It is at times an incredibly slow re-working of the original, therefore, and Fuchs’s concentration on sleep risks more than derisory criticism.

From the very opening glissandos – played with haunting intensity by the City of London Sinfonia – Fuchs’s focus is the slipping by humans from consciousness into the half-life of sleep, allowing the opera to occupy that brief episode of REM during which we each of us dream our dreams. It is a testament to her reading of the work and its symbolism that her pacing provides the energy of the final act with a winning dramatic logic. The magic and unreality of the preceding acts yields with unforgettable joy to the reality of the lovers’ awakening – and all on a bare stage consisting of little more than an armchair, two neon-framed boxes, a rope and fireman’s pole for the impressively acrobatic Jami Reid-Quarrell to work his magic as Puck. 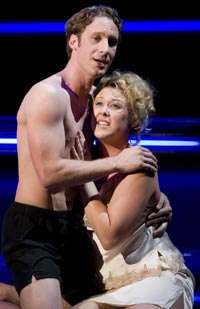 Fuchs does not dwell only on sleep; she explores also the opera’s other defining connection – between love and sight and the confusion that one so often fosters on the other. Around the auditorium, in a neon banner, are printed the words from Helena’s Act One soliloquy beginning “Love looks not with the eyes but with the mind”. Shakespeare’s reflection on the transforming power of love is to observe necessarily Cupid’s blindness – as experienced by Helena after her abandonment by her beloved Demetrius, who has fallen for the more attractive Hermia. Helena yearns to be infected by Hermia’s beauty, so as to win back Demetrius, and this focus of the staging is supported particularly well by the projection of haunting and often-disturbing images (including moving water, flying owls, and huge slow-blinking eyes) onto the back wall of the theatre. The action is brought also into the auditorium, with the cast making good use of the area around the orchestra pit.

If Fuchs demonstrates how well the work can be staged, then the cast prove how well it can be sung, even if no-one has yet been able to breathe much empathy into the characterisation, which is riven with ham and cliché. Neither Fuchs, nor her cast, is to be blamed; the odour of amateur dramatics is as much a product of the work as it is its interpreters, and even the excellent children over-play their parts as fairies. There is, as such, a sense of everyone trying just a little bit too hard.

The singing of the cast is outstanding. Jacques Imbrailo and Ed Lyon shine as Demetrius and Lysander. The countertenor William Towers is a majestic, if unfocussed Oberon, and Matthew Rose is a glorious Bottom, with a rich bass and natural stage presence. Katie Van Kooten is another star in the making, while Gillian Keith is all but made, with a voice of exceptional focus and clarity. The supporting cast is superb and Rory Macdonald directs the marvellous City of London Sinfonia with insight and intelligence.