My colleague Alexander Campbell reviewed ‘Cast A’ of this latest outing of Richard Eyre’s production of “La traviata”, a run beset by problems, mainly caused by Anna Netrebko’s bronchitis, resulting in her withdrawal from several performances, and Dmitri Hvorostovsky (Giorgio Germont) also having to withdraw from one evening. Perhaps what they had was caught from the audience – as the level of coughing is now becoming very annoying and detrimental to one’s appreciation of the works being performed. 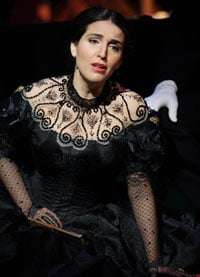 This production of “La traviata”, from 1994, tells the story well. Never are the main characters sidelined. In the title role now is the French soprano Norah Amsellem who made her Royal Opera House debut as Violetta in 2005; she is very different from Netrebko. Where the latter sang as though she had never had so much as a cold, Amsellem invests characterisation such that one knows there is tragedy that she is keeping hidden. This unwillingness to admit defeat gives Amsellem’s performance a dramatic edge absent from Netrebko’s. Violetta’s protracted death, the whole of Act Three, was captivating and the false hopes raised at the end leading to her demise were genuinely spine-tingling. 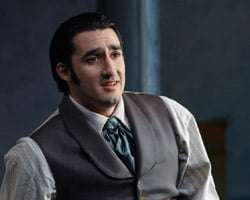 American tenor Charles Castronovo sung Alfredo for Royal Opera in 2005 and 2006; he has slotted into the part as the sexy hunter very well. Looking handsome throughout, though, does rob his transition from love-puppy to love-crushed man. No matter, for his is a confident and seductive performance, which revels in the joy of all things naughty but nice. In Act Two, when Alfredo realises his precarious financial situation and resolves to wipe out his shame, was vigorous and highlighted Castronovo’s great dramatic presence, anger maintained through the gambling scene. The tender duet between the lovers in Act Three, in which they forget the hopelessness of their situation, was heartbreaking and properly pathetic.

Polish baritone Mariusz Kwiecien is making his debut in the role of Germont. It shows. This was a very insecure performance, which may be down to nerves but seems more likely due to unfamiliarity with the role. Maurizio Benini had to encourage him on every entry and Kwiecien was fortunate in not having to move much as this allowed him to focus on the words. Such concentration allowed him to be appositely emotionally detached from the catastrophe unfolding in Act Two but was a failing in Act Three.

Elizabeth Sikora as Annina, Violetta’s ever-helpful maid, busied her way about the set and Eddie Wade, the Baron, was haughty enough throughout. Benini has settled down (when compared to Cast A’s first night) and achieved great playing and integration with his singers. The score sounded fresh and abounded in detail, and the delicacy he coaxed from the orchestra in the final act was notable; despite being punctured by raucous coughing, this was transporting.