A Swell Party: a celebration of the life and music of Cole Porter 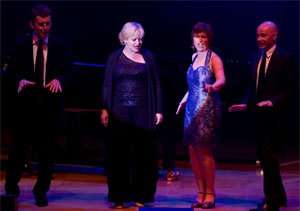 “A Swell Party” started life in London in 1991 at the Vaudeville Theatre with Angela Richards, David Kerman, Anne Wood and Martin Smith. Nickolas Grace, the only man alive who actually looks like Cole Porter, played the composer-lyricist. Here it is now Simon Green, who is tall and looks nothing like Cole, who plays the Porter part, narrating the life and times of one of the twentieth-century’s greatest and most prolific songwriters who stands beside Irving Berlin, George & Ira Gershwin, Jerome Kern, Richard Rodgers & Lorenz Hart as the best that the Great American Songbook had to offer in the glorious heyday of popular song and music-theatre, the period from the mid-1920s to the early 1950s.

Cole Porter was arguably the cleverest composer, although as lyricists Berlin, Ira Gershwin and Lorenz Hart were on a par with the best of Porter. Cole more or less invented or at least promoted the ‘list’ song, the best of which was his ‘You’re the top’ (“You’re the Colosseum / You’re the top, you’re the Louvre Museum / You’re a melody from a symphony by Strauss, / You’re a Bendel bonnet, a Shakespeare sonnet, / You’re Mickey Mouse”) and ‘Let’s do it, let’s fall in love’ (“The Dutch in old Amsterdam do it, / Not to mention the Finns, / Folks in Siam do it, / Think of Siamese twins”), a lyric so popular that Noël Coward was inspired to write a parody (“E. Allan Poe, ho, ho, ho, does it, but he does it in verse, / H. Beecher Stowe does it, but she has to rehearse”). However, Cole’s songs were not exclusively comic entertainment given that he wrote some of the best romantic melodies, torch songs and ballads ever penned. Even after a bad riding accident in 1937, in which his legs were crushed by the horse he was on, and after having hundreds of operations, he carried on writing, although from then on until he died in 1964 he was never without pain.

Porter was born in Peru, Indiana in 1891 to a wealthy family, on the insistence of his mother, Porter started musical training very early on, playing the violin from age six. His mother even helped him write his first operetta. He went to Yale and Harvard Law School but soon transferred to the Music Department. His first song appeared in a revue in 1915 and his first show, “See America First”, was staged a year later but flopped. Disillusioned, Cole went to Paris in 1917 and became a fixture of the European society circuit. He met a rich divorcee, Linda Lee Thomas, eight years his senior, and, despite his being gay, Cole married Linda and they led a very happy life together until just before his accident when they were about to separate. The accident brought them back together and they stayed married until Linda died in 1954. A charmed life? Perhaps, despite the suffering he underwent, but Cole was always out to enjoy himself – life was on the whole a ‘swell party’ for him and his friends. 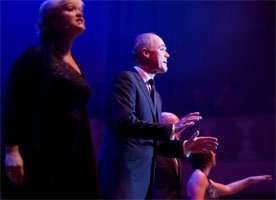 “A Swell Party” takes a swing through Cole’s life, illustrating it with some of his songs. He had great successes in the theatre with such shows as “Anything Goes”, “Jubilee”, “Red Hot and Blue”, “Dubarry Was a Lady” and “Panama Hattie”. He was then taken up by Hollywood, which brought a whole new set of rules but; as Cole records: “I loved sleeping under the stars or even on top of them!” Some of the songs are sung by all the performers while others are given as solos. It is hard to imagine that one man wrote so many songs (he registered disbelief at the idea of song-writing team Buddy De Sylva, Lew Brown and Ray Henderson: “It takes three men to write a song?”). After a dip in is fortunes as a writer, Cole came back with a vengeance in the late 1940s with “Kiss Me Kate”, “Out of This World”, “Can-Can”, “Silk Stockings” and the film of “High Society”.

This compilation show includes the more well-known Porter songs; all classic are numbers, sometimes given a switch so that we have Daniel Evans singing ‘Love for sale’, usually the song of a worn-out hooker plying her trade, and ‘Can-Can’, the title song from the show, is here sung by Graham Bickley, who also dictates a cool version of ‘Miss Otis Regrets’, a song written by Porter to win a wager from Monty Woolley who bet he couldn’t write a song with that title. Mary Carewe does truly great versions of ‘My Heart Belongs to Daddy’, ‘Down in the Depths’ and ’Always True to You in My Fashion’, with plenty of oomph. Maria Friedman, consummate artist that she is, sings brilliant versions of ‘Blow, Gabriel, Blow’ and ‘I Happen to Like New York’. Simon Green as Cole excels in such numbers as ‘I’m Throwing a Ball Tonight’ and ‘You’ve Got That Thing’ while also playing the perfect host, as no doubt Porter himself was.

The list is pretty much endless and the show packs in nearly forty great songs. The two pianist-arrangers, Jason Carr and David Firman, provide splendid support. The arrangements are just terrific and their ‘Entr’acte’ after the interval is a joy in itself as they play a medley of ‘You’re the Top’, ‘Another Op’nin’, Another Show’, and ‘Anything Goes’ in which the two instruments seem to be in musical conversation with each other. It takes a while for the singers’ voices to get used to the Cadogan Hall’s acoustic. It’s a big open space with little to absorb the sound and it is not necessary to sing at full blast.

There will never be another Cole Porter and the other great songwriters’ time has gone but the songs remain and we will still be singing them and listening to them when all of today’s rock and pop stars are but distant memories and mere entries in an encyclopaedia of music history.