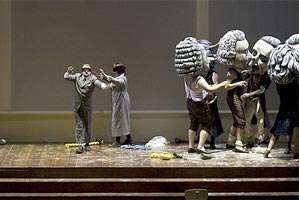 Oh dear! Where to start? This production came with ominous warnings from its premiere performances of last year, but was there a possibility that some of the silliness described in reviews at the time might have by this time been ironed out? The omens were not good, but I determined to keep an open mind.

Everything started well enough, with a spirited performance of the Prelude, Wagner’s amazing contrapuntal working of all the major thematic material of the opera bursting into the auditorium with clarity and verve. Then the curtain rose.

The set was unusually dark and did appear to be a public meeting space annexed to some formal society establishment of some kind – religious or otherwise – and with a set of formal rules as illustrated by the procession of young people bearing wooden batons. I use the word “illustrated” carefully, as the general theme imposed on this opera about German Art by Katharina Wagner is that it is actually about visual art and not about music or literature as indicated by Wagner’s text. True, he mentions Dürer early on, and there are references elsewhere to pictorial art. However what are songs in Wagner’s texts are here jigsaws, sculptures, installations and even performance art. Hans Sachs is portrayed as a shabby, disillusioned man, keeping himself going with the aid of cigarettes and booze and evidently suffering from some kind of artist’s block. His business is obviously failing as well, as he does not appear to wear shoes much of the time and most of the other characters spend their time throwing theirs around the stage – particularly in the night-time riot of Act Two. 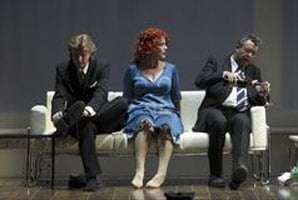 Beckmesser and the other Mastersingers are obviously all a type, set in their ways and reliant on rules. To prove their artistic credentials they all produced stacks of the small yellow “Reclam” paperback editions of German classic literature that are still widely available. Yawn! There appeared to be no attempt to differentiate them – yet Wagner is quite careful to tell us what the profession of each of them is. So they remained rather characterless throughout.

The apprentice David obviously acts as the clerk to the Guild, and seems ineffective and invisible to them. Enter Walther von Stolzing as a raffish, vulgar modern artist, adding daubs of white paint, graffiti-like, to everything in sight, be it musical instruments, walls, other paintings, furniture, statues, and finally even Eva. He presents some “shocking” modern art to the Guild – they reject him. That’s Act One in a nutshell more or less, except that for much of the time one could not always see the singers, as the director seemed determined to place them at points where they were invisible to half the audience – and this in a theatre with excellent sightlines. This is just being perverse and ‘modern’ for the sake of it. Indeed, Katharina Wagner’s emergence at the curtain-calls smilingly encouraging the audience to boo her and to prolong the ‘scandal’ of last year seemed so obviously calculated one was left with the feeling that the production was entirely about self-promotion rather than a committed artistic interpretation of her great-grandfather’s most approachable work. 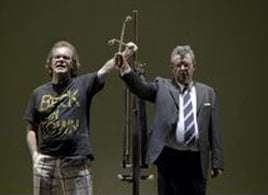 Act Two did not improve things. The whole interaction of the Sachs, Beckmesser, Eva and Walther scenes as the young couple try to elope was lost in a morass of over-direction as Katharina Wagner tried to impose an idea on the plot that did not fit comfortably – or even uncomfortably – on it at all. Sachs’s interruptive hammer blows were taps from his typewriter and so on. The riot involved lots of paint being poured, from the balcony, out of Campbell’s soup tins (how we laughed at this witty idea!), and the throwing of lots of trainers around the stage. Beckmesser ends that act in the middle of the riot by daubing himself with paint and undergoing a transformation to an aged “modern-artist” whilst Stolzing heads back to a comfortable conservatism. Hans Sachs receives a visitation from ghosts of past German artistic masters with outsized heads who eventually end up standing in a sort of a line and then, utterly predictably, high stepping like a chorus line – although without any precision. 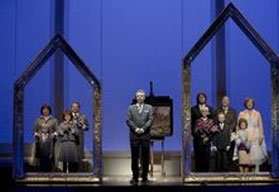 The final Festwiese scene ends up as a sort of talent show, where the winner is presented with a large cheque. By this time I had almost lost the will to live and needed a few beers to try and expunge the banality of the whole experience. The next day I opened the programme to peruse it more carefully. Within was an essay about the production in a form of an apologia, essentially stating that the ideas were so complex and difficult that the production was misunderstood. It then went on to try and explain a concept that any 14-year-old could probably have worked out.

Had the musical side of the performance been stronger, all might not have been lost. Needless to say the stars were the chorus and orchestra, even if the former remained hidden behind a gaze screen for ‘Wach’ auf’. For the main parts the solo roles were woefully under-cast. As Sachs, Franz Hawlata was very much out of sorts and seemed to be running into vocal difficulties by the middle of the second act. No announcement was made. Thus in Act Three his croaky, dry, passionless singing became an increasing liability. He started to lose pitch at crucial moments – marring the quintet for example – and barely made it to the end. The production gave him little scope but to mope around, but the character is so unlikeable, even in his foibles, that one did not care much.

Artur Korn’s Pogner was stolid but little more; Norbert Ernst’s David was nicely sung but curiously anodyne. The ladies were uninteresting. Michaela Kaune had taken over the role of Eva for this year and was adequate but neither vocally alluring nor individual enough to make much of an impact. She started and finished the quintet well enough – indeed her bright, technically assured singing of the final phrases was one of her best moments. Carola Guber’s passive Magdalene was utterly unmemorable. Only the tenor Klaus Florian Vogt produced any sense of excitement. He possesses a biggish voice of amazing open-throated quality and with a very lovely tone quality. There was no sense of effort about his singing, and he knows how to sing quietly when needed too. His ‘Prize Song’ was the pivotal point musically of the whole performance, and in some senses he saved the evening from being an utter write-off.

After the staggering and serious “Parsifal” of the previous evening, this production was a severe disappointment. Under normal circumstances, one would imagine it will not long remain in the repertory, though as Katharina Wagner looks to become one of the Festival’s future directors one cannot be so sure. Rumour has it she will direct the next new “Tristan und Isolde” there, too!