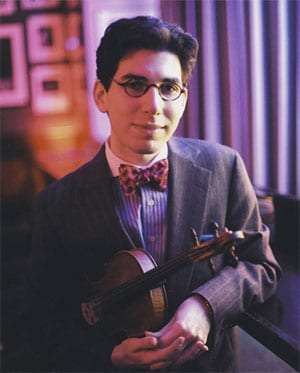 It’s easy to forget that jazz owes as much to the shtetls and synagogues of Eastern Europe as it does to the slave songs of the Deep South – to overlook the roots for Ira Gershwin, Benny Goodman and the improvisations of Fritz Kreisler, and instead remember only the drug-addled cool of the post-war generation. New York violinist Aaron Weinstein is here to remind us just how traditional, and how Jewish, jazz really is.

In a set of classics from the American Songbook, starting with ‘Pennies from Heaven’ and ending, as an encore, with his own gossamer-light arrangement of Harold Arlen’s ‘Somewhere Over the Rainbow’, played on a mandolin, the young musician performed like a jazzed-up Paganini. His playing is virtuosic. His bow drifted over the strings to create a feathery, delicate, spiky sound. Entire pieces were played no louder than mezzo-piano.

It is rare to hear a jazz soloist perform with such introversion or such serenity. And yet there was a fiery passion to Weinstein’s performance. The well-known melodies of ‘Ain’t Misbehavin’ and ‘Everything’s Coming Up Roses’ dissolved into racing scales, trills, octave leaps, open strings, harmonics, portamento, and every folk-style trick in the book. The Stéphane Grappelli-inspired Weinstein was well-cushioned at the piano by Dave Newton, a musician equally mellow and understated; although Newton hummed, Glenn Gould-style, during his solos, which was irritating.

Bespectacled and bow-tied, Weinstein’s studied awkwardness and self-depreciation belied his enviable talent. He interspersed the segued musical numbers with lengthy stand-up routines. He is often compared to Woody Allen and it is easy to see why. Staring meekly out at the audience, wringing his hands self-consciously, Weinstein told his audience that “music is not meant to be fun … I’d rather someone be bored by my music than entertained”, he said solemnly. “I hope you find this next selection tiresome, tedious, exhausting, laborious…”

The klezmer influence on Weinstein’s music was most apparent in ‘Dark Eyes’. He added to the Eastern European piece a lengthy unaccompanied solo in the style of a Bach prelude before relaxing back into swing at the close. Stunning! Throughout, Weinstein cloaked his emotional playing underneath a self-mocking geekiness. He stood iron-backed while playing, with an occasional comic shoulder-shrug. For the middle numbers he broke up the texture by pulling out a mandolin, again with an ironic motion, but then proceeded to play deftly and beautifully. It is almost a shame that he hides behind his hipster awkwardness. And yet that is much part of this performance as the impassioned music he makes. This was a lovely and unusual set that should not be missed.