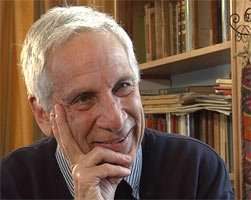 The actual birthday was on 10 August. The Berlin-born Alexander Goehr – son of Walter, the conductor – was brought to England the following year and has since developed a significant composing and teaching career. His current project is an opera, “Promised End”.

At this Wigmore Hall celebratory concert, numerous fellow-composers were in attendance – including Julian Anderson, Robin Holloway, Oliver Knussen, Peter Maxwell Davies, Anthony Payne and Hugh Wood (David Drew spoke some appreciative words) – and a long if satisfying evening ensued, which began with the impressive Elias Quartet in Stravinsky’s Concertino and capturing well the music’s pungent and slippery machinations, the rhythmic pugnaciousness, the wildness, the soulfulness and the slow-motion envoi.

The four pieces of Goehr included three world premieres, the most significant being the 25-minute “Dark Days (for Max)” – Max being Maxwell Davies – settings of Hesiod and from the “Iliad”, music gratefully written for the voice (the baritone occasionally required to speak) that holds the attention through ear-catching rhythms in the piano (Andrew West truly inside his part) and requiring intense eloquence from the singer, something brought with majestic ease by Roderick Williams, who also found the wistful and declamatory aspects of Goehr’s settings and leaving room for searching, fantasy and wit. Beforehand came “Ulysses’ Admonition to Achilles” (Shakespeare) – written for Gunther Schuller at 80 – a lyrically charged up-beat to the cycle.

The other major work of Goehr’s was his Piano Quintet (2000), written with Peter Serkin in mind; he was unable to give the premiere but has played it since. Here it was preceded by the one-minute Almost a Fugue, for two pianos (Daniel Becker and Huw Watkins), frenetic and ending abruptly, whereas the Piano Quintet is substantial, 30 minutes, but seems on a first hearing (for me) to be lopsided. Two concise movements – the first a rich discourse set in motion by the viola, the second almost (sometimes) a scherzo – that lead to a 20-minute set of Variations. However exquisite is the Theme and however ingenious the commentaries, the movement as a whole seems just a little too expansive (partly in relation to the opening movements); yet there is much to beguile – one can understand Goehr’s stated allegiance to Haydn’s piano trio examples – and with a Meridian recording due soon (an all-Goehr release and, as here, featuring Becker and the Elias Quartet), I look forward to returning to this work.

The concert’s second half had begun with Schumann’s Canonic Studies, composed for pedal piano and arranged for two ‘normal’ ones by Debussy. Each of the six pieces is a charming miniature, as much Bach as Schumann, and well chosen for the evening (by Goehr?), especially as Becker and Watkins played with salon intimacy and musical focus.