There is something sad about Alina Cojocaru, by which I mean her dancing persona is often characterised by an underlying melancholy. She is not a naturally sunny ballerina (although she excelled when at The Royal Ballet in ‘happy’ roles by dint, one surmises, of her exceptional artistry), but is rather more a serious, introspective one, so it came as no surprise that her ‘show’ at the Sadler’s Wells was an intelligent, well thought-out presentation devoid of gratuitous effect or flummery. 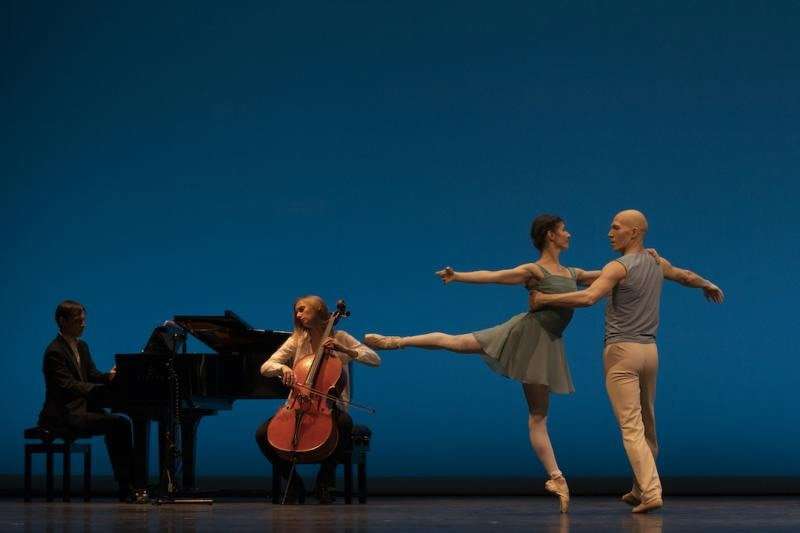 Her temperament and artistry make her a natural fit for the great Margot Fonteyn vehicle of the consumptive courtesan in Frederick Ashton’s Marguerite and Armand. In a performance which showed the ballet freed from the constraints and the ghosts of the past of Covent Garden, she painted a detailed portrait of Marguerite, the demi-mondaine who finds love in the young Armand only to be forced to renounce him by his father. Hers is a doomed courtesan, the shadow of her mortality passing constantly across her face, the anguish at having to relinquish the source of her happiness tellingly conveyed. Again and again one had the sense that what was happening to her character had been foreseen by her and was playing out in all-too anticipated a fashion; the creation of a sense of impending doom and knowledge of it is that needed by those dancing the title role in Giselle, for instance, but is a skill which eludes all but the very greatest exponents. Cojocaru has that talent.

It helped that Francesco Gabriele Frola was such an ardent Armand, an impetuous youth whose unthinking cruelty is the particular preserve of the young. Frola, a principal dancer with English National Ballet, fully looked the part of a dashing young blade, partnered securely and executed the sometimes tricky choreography with sense and proportion. His was an Armand sucked into Marguerite’s tragedy.

Cojocaru’s real-life husband Johan Kobborg – a dance-actor whom your critic holds in the highest respect and admiration – was too fussy a Germont père, his father, bringing too much detail to what is a cool, detached persona which finally cracks when he realises the innate nobility of the insulted Marguerite in the third scene. It was good to see Alastair Marriott, late of The Royal Ballet, on the stage once again.

Cecil Beaton’s sets and costumes from Covent Garden looked fine, and Liszt’s music was superbly played by Ukrainian pianist Sasha Grynyuk from the pit – the slightly quicker tempos and the sheer excitement of his rendition were a revelation in a work which, when performed at the other place, can seem pulled down by the weight of the orchestra as well as the performing history of the work itself.

The first half of Cojocaru’s programme comprised three short dance works separated by two short films placed for her to catch her breath and change costumes. It started, however, with a virtuoso performance of Handel’s Passacaglia from his Seventh Suite, arranged by Johan Halvorsen for Violin and Cello. It set the serious tone of the programme – two spot-lit musicians on an empty stage playing ‘serious’ music. Margarita Balanas and Charlie Siem played in other dance pieces, and it was a generous gesture to give them their own moment. They deserved the enthusiastic applause.

Let us dispatch the one dud of the programme first: Juliano Nunes’s nonsensical, clunky Journey for Cojocaru and two slightly overwhelmed men (one of whom is the choreographer himself). Intended to convey the ‘ups and downs’ of life, it fails in its brief and emerges as a poorly thought-out, stop-start affair set to forgettable music from Luke Howard. The fact that movement continued after the music had stopped added to the disjointed impression of it all. Best forgotten.

Kobborg’s Les Lutins dates from 2009 and has been seen around the world, and it has lost none of its ability to entertain. It is a light-hearted work to a Wieniawski caprice and Bazzini’s La Ronde des Lutins (expertly dispatched by Siem and Grynyuk). Marcelino Sambé, released from the sheer awfulness of dancing Jacqueline du Pré’s cello at Covent Garden, scampered and turned, leapt and gambolled like the virtuoso dancer he is, given a run for his money by a fleet-footed Takahiro Tamagawa with a nice line in successive doubles tours en l’air. Cojocaru’s role in Les Lutins has always felt a little under-baked and, given the seriousness of the rest of the programme, felt a little incongruous in the context.

An intimate, almost private pas de deux for Cojocaru and Kobborg opened the dancing. Tim Rushton, British choreographer and company director almost unknown in this country, created Reminiscence, referencing the work he has done with the ballerina in Hamburg where she is the Permanent Guest Artist at the ballet company. Your critic fancies even seeing fleeting references to other roles both dancers have performed, such as those of James and The Sylph in La Sylphide, but whatever the provenance of any references, Rushton has succeeded in creating a duet which pays tribute to the two dancers’ artistic and personal partnership with fluent, flowing choreography replete with shared moments, glances and a deep understanding of each other.

Of the two filmed sections, the second, Kiev, directed and choreographed by Kim Brandstrup no less, is an exquisitely judged episode concerning the ballerina returning to the Ukrainian capital’s ballet school and meeting her old teachers in a gesture of thanks and recognition. To describe it thus is not to do it justice, as Brandstrup artfully conjures up four aged individuals who, we soon understand, are Cojocaru’s former coaches. The spare piano score played is Für Alina by Arvo Pärt. A moving and beautifully judged film interlude.