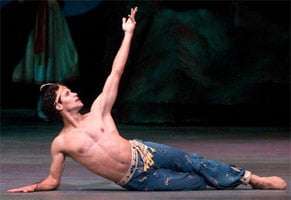 Le Corsaire is one of those second-league remnants of classical ballet, like Don Quixote, which somehow have survived into the present-day repertoire. A confused libretto (based on Byron’s The Corsair), a preposterous narrative and a mish-mash of music (five composers no less) do not make for a coherent or indeed persuasive evening. But Le Corsaire exists for one reason and one reason alone, and it is not to provide an escapist romp: it must display the finest classical and character dancing that can exist, or else it slumps into nothingness. Alas, American Ballet Theatre is not strong enough in either form of dancing to ensure that the work lives, and, as they present it, it emerges as a silly, incoherent romp, with the characters shallower than in a Tex Avery cartoon – Victor Barbee’s Pasha was so over the top as to make the Eunuch in Sheherazade a model of understatement.

Alas, ABT’s choice of repertoire for their London visit has been totally wrong; not only did they go head to head with The Royal Ballet with Swan Lake, but they have presented a sub-standard, bastardised and under-danced version of Le Corsaire to an audience who has both the Mariinsky and above all the superb Bolshoi versions fresh in its collective consciousness. Would that the company had had the courage to bring some of their ‘own’ works. They would have secured a greater success with some Antony Tudor, whose centenary fell exactly on the date that they performed Le Corsaire. Tudor, a London boy who overshadowed Frederick Ashton in the 1930s and made his career in New York both during and after the War, was principal choreographer for ABT. Nor did London have the chance to see works exclusive to the company from other choreographers – think Loring’s 1938 Billy the Kid. No, they went for a bum version of Le Corsaire and have paid the price – empty seats a-plenty and lukewarm responses. 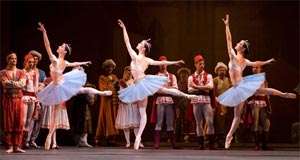 Le Corsaire is all about the beauty of classical dance: Medora must dazzle in her technical purity, Gulnare too, as well as the odalisques who have some of Petipa’s most sublime inventions to perform. Alas, none of the company’s women on this showing proved herself up to the demands of this choreography: the odalisques, whose pas de trois was recently so well done by the drag company Les Ballets Trockadero de Monte Carlo, performed their variations in a bland style, just about correct when it came to the feet and legs, wayward and imprecise with arms, hands and head. But it all felt like a classroom exercise – there was nothing of the sparkle of performance, no communication with the audience of the joy of dancing, just the tightened jaw of a determination to nail yet another double pirouette. I yearned for the wondrous dancing of the Russians in this work.

Misty Copeland is much favoured by the company, and here she was taking on Gulnare. Usually Gulnare is the perkier of the two lead women and given to the technically strong but visually less alluring dancers in the company. In short, she needs character – she must be playful, cheeky, amusing, dazzling. Copeland is none of these – she dances with a blank mask, her face expressionless, not even much of smile when she is re-united with her friend Medora. She has a somewhat pudgy technique, is not unpleasant as a dancer, but remains as yet incapable of breathing life into the choreography and is all too obvious in her preparation. 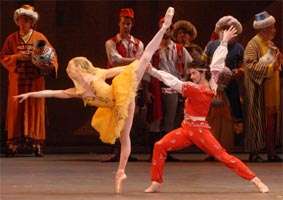 Best of all (thankfully) was the Medora of Xiomara Reyes, a principal with real character, an engaging smile and a real rapport with the audience. Her Cuban training shone through even if technically she was a little below par – her variation in the famous pas de deux was marked by almost everything not quite working, although she pulled things together with some mighty fine fouettés in the coda. But what was most important was that she gave a performance, the only woman to do so.

ABT possesses far more interesting men than woman at present, and the four male leads were well taken, all of them vying to shine technically, and entering into the ridiculous hokum with gusto. Little Mikhail Ilyin as Conrad’s friend Birbanto was determined to shine, and fizzed through his choreography, as did Jared Matthews as Lankendem, who despite being kitted out in an orange romper suit (the costumes in this production are both lamentable and lurid) snapped out precise and exciting enchaînements. Gennadi Saveliev had already impressed me in the pas de trois in Swan Lake, and here he continued to display his fine and correct technique although he falls just that tiny bit short of convincing as a virtuoso. No chance of mistaking Herman Cornejo’s claim to that descriptor as Ali who poses and pouts throughout the ballet only to shine in the pas de deux (made so famous by Nureyev). Cornejo is a star, and he knows it, his variation dangerous in the risks he took, his pirouettes unending, his energy astonishing.

Sets and costumes come from a 1950s kiddies’ picture book of the 1001 Nights; all right on a shelf in Barnes and Noble, but not so hot on a stage. The irony of the timing of this production’s outing is not lost: in the centenary year of Diaghilev’s Ballet Russes, a company that stood for the modern, the exciting, the fusion of the greatest talents in dancing, music and design, ABT firmly turns its back on all that it stood for and plumps for everything in all those art forms that Diaghilev and his astonishing collaborators rejected. Sets and costumes are facile and the music, while strong enough to tap your foot to, is heavy on crashing cymbals and timpani – like a New York doughnut (or donut), quickly consumed, momentarily enjoyed but quickly forgotten and of next to no nutritional value. Charles Barker’s noisy conducting style was better suited to this score than that of Swan Lake the week before.