The American Composers Orchestra launched its 31st season with the first of its “orchestra underground” concerts at Zankel Hall, the multimedia-ready downstairs performance space at Carnegie Hall. The series focuses on cross-genre, multimedia, and collaborative works involving orchestra, and has garnered a reputation for daring, adventurous and brash programming.

The works by Susie Ibarra, Steve Coleman and Ken Thomson were preceded by video portraits of each artist. Coleman amd Thomson talked about their music; Ibarra was shown collaborating with painter Makoto Fujimara in a well-produced, sonically and visually appealing short video. 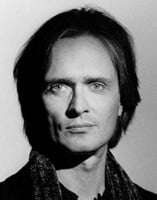 Scott Johnson has been a fixture on New York’s new-music scene for nearly three decades, where he has explored collaborations and outright collisions between classical, rock and electronic music as both a composer and soloist. His music exploits his knack for combining rock and pop ‘hooks’ with texturally and melodically engaging material.

Stalking Horse is his most recent ‘mash-up’, sporting orchestra-writing that began in a manner reminiscent of Virgil Thomson evolving into meandering, probing polytonality, with flourishes of electric-guitar blending and clashing with the ensemble. Johnson’s guitar elicited sounds and riffs variously reminiscent of 1980s’ jazz-fusion, Robert Fripp, and even bossa nova. This work sounded both under-rehearsed and too thickly orchestrated, and the balances often oddly favoured the orchestra over the guitar; overall, though, this work is very appealing, and would be at home on the same program as, say, John Adams or Louis Andriessen.

Susie Ibarra is a remarkable percussionist who demonstrated her uncanny ability to elicit beautiful sounds from a standard jazz ‘drum kit’ and traditional Asian percussion instruments in the multimedia work Pintados Dream. The concertante work is played simultaneously with live video projection of Makoto Fujimura painting in a fusion of Japanese and modernistic style, applying traditional Japanese techniques. The music draws on Philippine and Japanese folk forms and sounds; Ibarra has a knack for orchestral color reminiscent of Toru Takemitsu. Both soloist and orchestra were amplified – to unexpectedly pleasing effect. The projection suffered a bit from too bright an overall video level, which washed out the painting yet accentuated Fujumura’s movement in the creation of his painting. 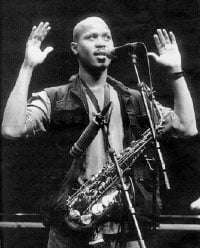 Jazz saxophonist Steve Coleman’s The Illusion of Body was in many ways the most impressive work. The ‘programme’ of the short piece is the evolution and nature of human and universal consciousness, beginning with an upward glissando string figure that couldn have been straight out of early Xenakis. For his part, Coleman ‘riffed’ effortlessly in this through-composed symphonic poem, with rhythmically complex, often Stravinskian-sounding orchestral accompaniment that became more and more harmonically complex as the work unfolded. Coleman has the best handle on orchestral colors and nuance of any of the evening’s composers, and his virtuosic, post-bop playing interweaved seamlessly with the orchestra. For their part, the players looked as if they were enjoying this work, accentuating the rhythmic power of Coleman’s vision.

Anna Clyne’s paintbox is a collaborative electronic work with computer-generated visuals by artist Joshue Ott. The music is a soundscape of amplified and pre-recorded cello sounds and vocal scintillations that call to mind John Chowning and Paul Lansky that would have had a stronger and more appealing impact had the volume been dropped, say, six decibels. At the high volume, the effect was unrelenting and oppressive. The visuals, which appear to be generated in real-time using a fractal algorithm, seemed to complemented the music, having the subversive effect of making the work seem almost too short by half! paintbox would be quite effective in DVD format as a “home theatre” experience.

Jazz innovator Charles Mingus influenced artists as diverse as Joni Mitchell and Dave Holland; his 1955 work Revelations was a tribute to his years of worship in the Holiness Church and the impact gospel music held on his development as a composer. Written for small ensemble (flute, tenor and baritone saxophones, bassoon, trumpet, horn, trombone, electric guitar, electric bass, harp, piano and percussion), the music is reminiscent more of the later film music of Bernard Herrmann and the 1960s’ television soundtrack music of Marius Constant than of Duke Ellington. Yes, there is plenty of 1950s-era jazz in this work, but there are dramatic dynamics and evocative colour. This is a superb work – one that begs to be choreographed – and I have to wonder why this music is so seldom played.

The final work, by jazz-rock quartet gutbucket‘s saxophonist Ken Thomson, came off as an exuberant and entertaining pie in the face of traditional sonata form. The work begins with the strings sawing away on sixteenth notes in octave unison, percussive punctuation on (or off) the measure, woodwinds (in the high range) and brass blaring dissonant but tonal-centric chords, seeming to build to a climax and then … continuing. Eventually, the orchestra hits a dynamic climax and gutbucket enters – playing exactly the same music with which the orchestra began, but arranged for saxophone, electric guitar and bass, and drum kit, an unrelenting wall of rhythmically tight, machine-gun jazz-punk noise. gutbucket demonstrated their well-earned reputation for high-energy avant-rock fusion – especially Thomson, who is a particularly extroverted player. Conductor Steven Sloane and the orchestra mirrored his amped-up euphoria as they joined in the work’s final barrage of aural mayhem, trading blasts of virtuosic energy, a heavy-metal post-Bernsteinian musical rumble that received a rousing ovation and brought an adventurous evening of music to a riveting close.