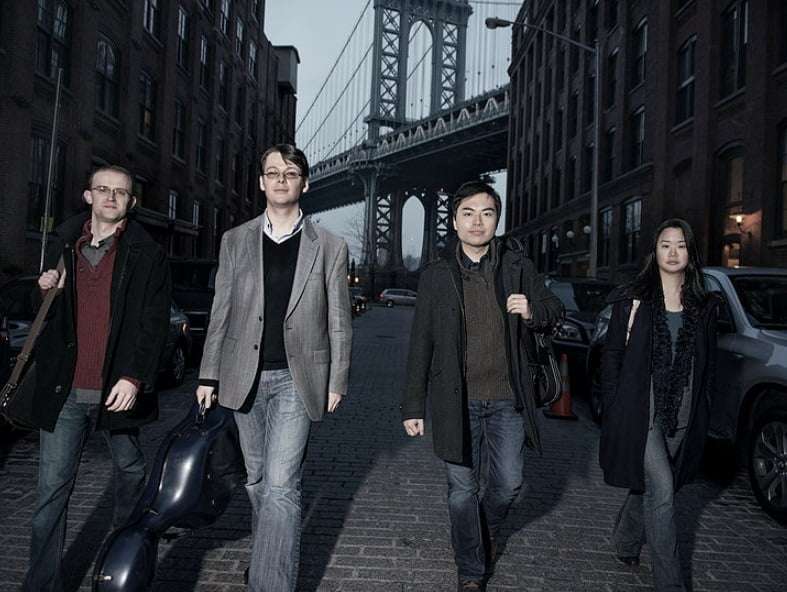 Alexander Schneider was a towering figure on the New York music scene. For years a member of the Budapest String Quartet, he began later in life to assume the role of mentor par excellence, establishing educational programs and training opportunities for the most talented string players. ‘Sasha’ was the founder of the New York String Orchestra, whose Yuletide season convocations lead to two concerts at Carnegie Hall every year, and the chamber music series at Mannes, which features exceptional young ensembles, bears both his name and the legacy of his inspiration. The inaugural “Schneider Concert” presented the Amphion Quartet in an all-American afternoon that wasn’t.

Anyone who is musically or politically aware – or who watches the football World Cup – knows the tune to the German national anthem. Few realize that it is not German but was written by an Austrian and is the main melody of the second movement of Haydn’s ‘Emperor’ Quartet (Opus 76/3). Samuel Barber’s Adagio for Strings is a similarly well-known piece, primarily because its tragic overtones have been employed to evoke sadness at world commemorations, and is the middle movement from his String Quartet.

Perhaps it is the fault of overzealous conductors, but the string-orchestra version seems inferior to the original because the latter walks the tightrope between sentiment and sentimentality much more adroitly. After a spirited Molto allegro e appassionato, the youthful Amphion members created an almost holy world for the Adagio. David Southourn employed a stirring vibrato for the famous melody which was followed by a more straightforward version by Wei-Yang Andy Lin. The was an ear-catching gambit and led to a third very different interpretation when Mihai Marica employed portamento.

The Robert Mapplethorpe Residential Treatment Center now occupies the building that replaced the nineteenth-century house whose most famous tenant was Antonín Dvořák. Just around the corner, where part of Beth Israel Hospital now stands, is the site of the conservatory that the composer ran in the 1890s. Some of the gentility of the Bohemian still adorns the neighborhood, even though the little park, with its odd combination of downtrodden locals and uniformed medical personnel on coffee break, reminds rather chillingly of Forman’s One Flew Over the Cuckoo’s Nest.

Dvořák wrote the ‘American’ String Quartet in Spillville (Iowa) during his 1893 summer vacation. The piece is a superb combination of pentatonic melodies, birdsong and indigenous folk-style. The result is a profound mixing of exuberance and Sehnsucht. This Amphion rendition was superb, the singing tone of Katie Hyoun – now in the first chair – creating an exuberant first movement with an infectious degree of propulsion. The Lento, the most beautiful piece of Dvořák this side of ‘Song to the Moon’ in Rusalka, was also well played but suffered somewhat from a lack of contrasting dynamics.

The substitution of the Second ‘Razumovsky’ for Elliott Carter’s String Quartet No.3 was a bit of a mixed blessing. A huge upgrade in content – the Carter is a juxtaposition between the duos of first violin and cello versus second violin and viola played simultaneously that seems to owe at least some of its genesis to a sense of what might impress the Pulitzer committee (he won his second prize for this particular piece) – but not a performance to measure up to the first half of the program. All of Beethoven’s notes were there, but much of that Beethovenian fist-shaking power was missing in action.

We have been talking of slow movements and national anthems, so let us stay this course. The Adagio of the Beethoven was the best performed movement, and the Un poco allegretto does not reference the Russian national anthem, despite what your music-history professor might tell you, but does invoke the patriotic tune ‘Sláva Bogu ne nebe, Sláva’, used later to great effect by both Mussorgsky and Rimsky-Korsakov.

Let us end on two light notes. Following the Beethoven Adagio there was quite a bit of coughing – except that it was coming from the Amphion players who, once they had received a hearty laugh from the crowd, smiled proudly before continuing. Also, I am not sure whether to be happy or sad about this, but, except for a few personal healthcare workers, I was apparently the youngest listener in the room.