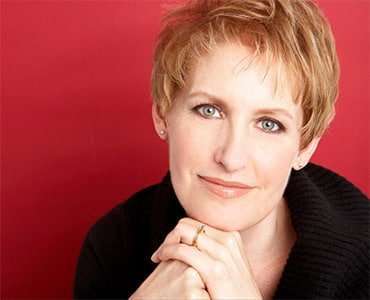 Liz Callaway is making her cabaret debut with her finely paced act at The Crazy Coqs. Complementing her fine, full-throated singing she gives us some engaging and witty stories about her life and career, including shows on Broadway and off-Broadway, priceless accounts of her husband’s stalking method of wooing her and a period spent as Barbra Streisand’s stand-in.

After an appropriate song of anticipation, ‘Something’s coming’ from West Side Story, Callaway displays a fiery determination in the 1963 hit by John Madara and David White, ‘You don’t own me’, an anthem of the female liberation movement. After this forceful start, any qualms that Callaway might lack vulnerability are swiftly dispelled with a brilliantly matched combination of two ballads of loving devotion, Styne, Comden & Green’s ‘Make someone happy’, and Rodgers & Hammerstein’s ‘Something Wonderful’. Stephen Schwartz’s demanding ‘Meadowlark’ from The Baker’s Wife is given full value, preceded by an amusing anecdote about one of her first jobs in New York, a singing waitress. Though it did not last long (her waiting was not in the same class as her singing) she was given a chance to sing each night. She liked to include ‘Meadowlark’, though had to omit it sometimes because the cafe’s pianists could not handle the complex accompaniment. Callaway’s adept pianist, Alex Rybeck, has no such problems.

Brownstone was one of several short-lived musicals in which Callaway had a leading role. It ran off-Broadway for two months in 1986 but its score by Peter Larson and Josh Rubins yielded ‘Since you stayed here’, a poignant number recorded by Bette Midler and Callaway herself. Other neglected treasures include the joyous ‘What more do I need?’ from Sondheim’s first musical, Saturday Night, and Frank Loesser’s impassioned love-song from The Most Happy Fella, ‘My heart is so full of you’.

Callaway does not ignore the standards. She includes ‘Singin’ in the rain’, ‘People’, ‘Losing my mind’ and ‘Memory’. The last may well have daunted for her, since her opening-night audience included Elaine Paige, but it was a powerfully convincing account of the Cats showstopper, but none more so than a brilliant piece of material relating the risks a singer takes in attempting Sondheim’s challenging songs, such as ‘Another hundred people’ and ‘Getting married today’. To the music of those tunes Laura Mayer has set a breathtaking account of the hazards involved, and Callaway gives an astounding rendition.

Callaway admits to a particular nostalgia for the 1960s, her salute to the decade including Jimmy Webb’s ‘Didn’t we?’ and the seductively wistful ‘Leavin’ on a jet plane’, composed by John Denver but indelibly recorded by Peter, Paul and Mary. One of Callaway’s significant credits was providing the singing voice of Meg Ryan in the title role of the animated feature, Anastasia (1997). She introduced ’Journey to the past’ by Lynn Ahrens and Stephen Flaherty, a song nominated for an Academy Award, though Callaway is prouder of the fact that her soundtrack was used by ice-skater Tara Lipinski for her gold-medal routine at the 1998 Olympics. She also appeared in a Broadway musical as one of three pregnant women whose stories are told in Baby (1994). With songs by Richard Maltby Jr and David Shire, it was nominated for a Tony Award and ran for more than 200 performances. Callaway gives a vibrant rendition of her major solo, ‘The story goes on’, as an encore to a delightful performance.