The Beautiful Game
Revival of the musical first staged in 2000, with music by Andrew Lloyd Webber and book & lyrics by Ben Elton 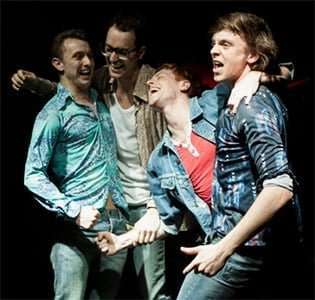 Apart from Damn Yankees, you would be hard pressed to think of a stage musical with a sporting background, save Cricket, which Tim Rice and Andrew Lloyd Webber wrote for HM The Queen’s sixtieth birthday in 1986. Commissioned by Prince Charles it played for a single performance at Windsor Castle, although it was later staged at the Lord’s Taverners Ball. It was the last show that Rice and Lloyd Webber wrote together. Fourteen years later, the latter and Ben Elton created a musical with a football setting, The Beautiful Game.

When it opened in 2000 it received reasonably good reviews but the production played for just under a year – not a long run for a Lloyd Webber show. Some felt the book did not match Lloyd Webber’s music. Nevertheless, it won the Critics’ Circle Award for Best Musical, although it received nothing at the Olivier Awards and there was no transfer to Broadway. In 2008 the authors re-wrote The Beautiful Game by adding and subtracting songs and refining the book with a more positive ending. It was then re-named The Boys in the Photograph and work-shopped by students of the Liverpool Institute for Performing Arts, before being given fully-mounted productions in Canada, then performed by a Northern Irish youth theatre group before being taken to the Waterford Festival. This is the version at the Union Theatre, albeit under its original title of The Beautiful Game. 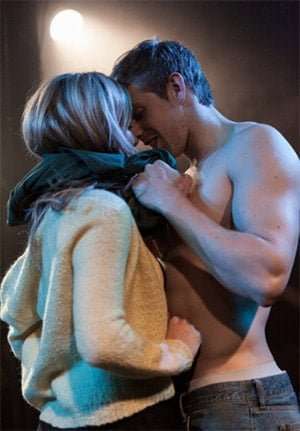 Set in 1969, a Belfast football team is the backdrop to the political and religious troubles. The team, all Catholic boys except for one Protestant who claims he is an atheist, is based at a church where the priest, Father O’Donnell, is the team coach. The title-song declares that the first day of the football season is the holiest day of the year, because football’s not like religion; it’s more important than that. There are girls too, and strong relationships begin to form between John and civil-rights demonstrator Mary, atheist Del and goodtime lass Christine, and Ginger, who prays for peace, and Bernadette, who wants the same.

The political situation is never far away from everyday life in Belfast and one of the team, Thomas, a fervent Irish Catholic national supporter, becomes involved with the IRA and even enlists help from John as he is about to begin his honeymoon with shy young bride Mary. As both are virgins, one of them declares “I hate being Catholic” to which Father O’Donnell says if you wait for sex until you are married, it’s even better. Exhausted by the troubles, however, some of the team plan to leave Belfast and move to Liverpool and New York, but will politics and religion forever stand in their way? A fact they are forced to admit is that some of their countrymen not only kill for love but also love to kill.

Lotte Wakeham’s scaled-down production for the Union Theatre makes the show more intimate than on its original outing. The audience is up close and personal with the action, which only adds to involvement in the plot. Although football takes a back seat in the second half, the scenes of the team playing are excitingly choreographed. If Elton’s book has been tightened up there is still the feeling of it trying to be all things to all men. Still, Lloyd Webber’s music rings the changes, from the opening rousing title number, through the eloquently moving ‘The boys in the photograph’ and ‘If this is what we’re fighting for’, the romantic ‘Don’t like you’, the plangent ‘Let us love in peace’ and ‘All the love I have’, and the more boisterous ‘Born in Belfast’. The cast acquits itself with great bravado, putting across dialogue and songs with equal panache. Ben Kerr as John and Niamh Perry as Mary provide a winning portrayal of young love under pressure, while Stephen Barry as the atheist Del and Daniella Bowen as Christine convince as a couple trying to keep their heads above politics, religion and personal morals. Alan McHale as Ginger and Natalie Douglas as Bernadette also stand out in an altogether fine company, led by Carl McCrystal as the at-times unholy Father O’Donnell. The bullying, rebellious Thomas is appallingly well characterised by Freddie Rogers in a way that is genuinely shocking.

It would appear that making The Beautiful Game a chamber piece has improved it beyond measure. Wakeham’s direction and Tim Jackson’s choreography have certainly injected more life into it. After the poor reception given to Stephen Ward, with this production it looks as if Lloyd Webber has scored a goal in extra time.