“Annie Get Your Gun” 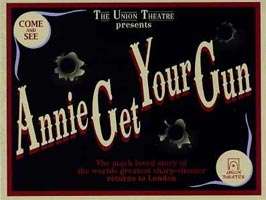 Irving Berlin wrote two musicals for Ethel Merman, “Call me madam” and “Annie get your gun”. The latter was going to be penned by Jerome Kern for Rodgers and Hammerstein to produce, but the composer of “Show Boat” died and the task went to Irving Berlin who created a clutch of classic musical-comedy numbers that survive to this day. Any show with songs of the calibre of ‘Doin’ what comes natur’lly’, ‘The girl that I marry’, ‘You can’t get a man with a gun’, ‘They say it’s wonderful’ and ‘Anything you can do’ has a hit on its hands and “Annie” ran for over 1,100 performances from 1946. It had a four-year run in London with Dolores Gray.

Although written after “Oklahoma!”, which many think of as the watershed production that changed the Broadway musical for ever, “Annie get your gun” was more typical of the musical-comedy style of the 1930s, i.e. good songs but daffy and inconsequential plots. While Rodgers and Hammerstein’s own shows (“Oklahoma!”, “Carousel”, “Allegro”, “South Pacific”) had substance and messages in them, their production of “Annie get your gun” just went for pure entertainment with a guaranteed copper-bottomed star in Ethel Merman in the Annie Oakley role. It was a great success, but Merman did not get the role in the movie version. Originally slated for Judy Garland, the part went to Betty Hutton when Garland got sick. However, Merman did a revival in 1966 as did Bernadette Peters in 1999, a production that ran over 1,000 performances, during which other actresses (Cheryl Ladd, Reba McIntire, Crystal Bernard) took over the lead. Recent London revivals included those with Suzi Quatro (1986) and Kim Criswell (1992). 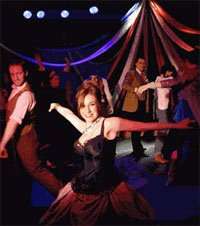 The story by Herbert and Dorothy Fields takes some aspects of Oakley’s life as a sharpshooter and weaves them into a charming portrait of an uneducated backwoods woman who, through her talents, managed to support her family. She met Frank Butler, another sharpshooter, and joined him in the Buffalo Bill Wild West Show that toured the States at the turn of the twentieth-century. They fought and split up but were reconciled in a shooting match that Annie loses on purpose.

For the 1999 revival and for this Union Theatre production the script was restructured to make it politically correct! In the palatable new version the shooting match is a draw. Certain songs have also been dropped including ‘Colonel Buffalo Bill’, ‘I’m a bad bad man’ and ‘I’m an Indian too’, and the whole story is told in flashback by Frank Butler. A new song written by Berlin for the 1966 revival, ‘An old-fashioned wedding’, has been restored.

The Union Theatre’s splendid revival works on every level. In the tiny space underneath the railway arches in Southwark a circus atmosphere is created with just a few red, white and blue streamers and some coloured lights. It’s a sort of theatre-in-the-round production but, as the audience is so close, it’s more like ‘theatre in your lap’. But the cast works very hard at creating the illusion of a Wild West show. It’s all very rousing and included are some of Berlin’s best tunes including the famous anthem to Broadway, ‘There’s no business like show business’.

If she’s no Merman, Vanessa Barmby is still a little belter, with a strong voice, although her enunciation needs working on. As Butler, Matthew Eames holds the show together very well. Anna McAuley as Dolly Tate, a kind of rival for Annie, is also powerfully voiced and has a natural way with her comedic moments. It’s a fine Company all round, though, with quite a lot of doubling up. All the Indian braves are played by women while Annie’s family is portrayed by hand-puppets (is that politically correct or incorrect?). Emma Hauxwell, playing Chief Sitting Bull, is also a dab hand on the violin. Members of the gifted cast play instruments such as the Swanee whistle, drums, pans and other assorted percussion.

Director Thomas Southerland really has his work cut out, fitting it all into a small space, but it works and provides such joie de vivre. You can dispel any feeling that it’s just boys and girls playing at putting on a show.