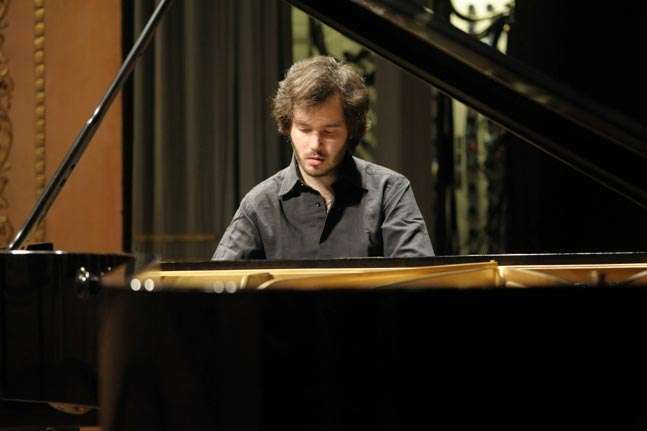 This was a Wigmore Hall debut to make you sit up and listen. Antonii Baryshevskyi, winner of the 2014 Arthur Rubinstein Competition and several other awards, emerged as a formidably complete musician – the 27-year-old Ukrainian pianist has clearly gone beyond his prodigious technical accomplishment to reveal an artist of considerable insight. Let’s hope that his independence of approach, which suited the maverick aspects of some of his programme so well, keeps its edge and curiosity. An assured stage manner, the natural engagement with the piano (here a beautifully voiced Fazioli), an admirably economical, non-histrionic technique – he has them all, along with that compelling and mysterious X-factor.

He made a bold start with his Scarlatti group, asserting their bristling energy and fierce self-containment through a muscular attack that went straight to the centre of their rhythmic complexity. These perfectly formed, short dramas were thrilling in all their rhetoric, wit and colour, and Baryshevskyi’s control of timbre and volume cleverly deferred to harpsichord manners. These attributes transferred brilliantly to Ligeti’s Musica ricercata, his 1950s’ series of eleven miniatures that, piece by piece, gradually fold in all 12 notes of the chromatic scale and play games with tonal expectation in music of dazzling invention. They are formidably virtuosic and original, and Baryshevskyi was in total command of their emotional and technical range, from savage, through weird to poetic, with rhythmic challenges that can make, say, Bartók seem like a walk in the park. What a great composer Ligeti is.

Baryshevskyi’s gentle beginning to the second part of his recital – a selection of Chopin Mazurkas – gave a chance to be beguiled by his acutely tuned sense of rubato and keen appreciation of these pieces’ characteristic tension between energy and enervation, further enhanced by the piano’s subtle and glowing tone. They paired well with the three pieces from Messiaen’s Vingt Regards, in which Baryshevskyi’s elegantly terraced palette of timbre and an obvious affinity with the music’s rapt spirituality made you hope that some-day he’ll address the complete set. He ended with Schumann’s G minor Piano sonata, the one with the instruction for the first movement ‘As fast as possible’ then later ‘Still faster’. Speed wasn’t an issue for Baryshevskyi, but he didn’t allow it to obliterate the music’s stormy passion, and he was completely seductive in the lovely Andantino, one of Schumann’s loveliest romances.

Not content with that, his first encore was a demonic account of Mussorgsky’s bone-crunching ‘Baba Yaga’ and a radiant account of ‘Great Gate of Kiev’ – both from Pictures at an Exhibition – which the piano accommodated in glorious Technicolor, and then he pacified us with two Scriabin pieces.