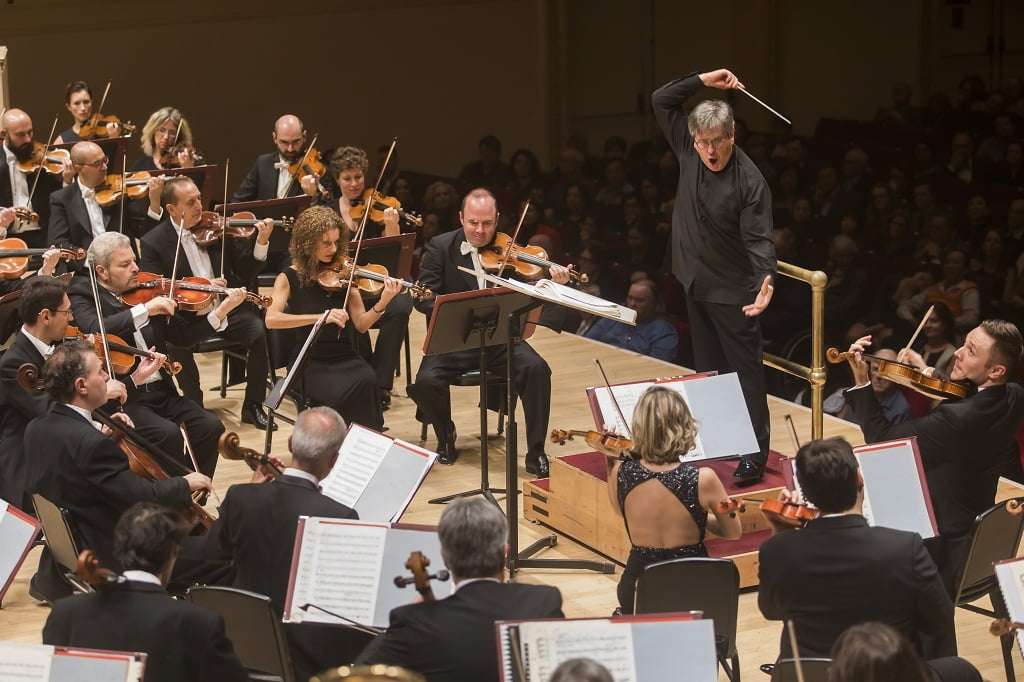 Two apparently unrelated works; yet both deal with the depths of human tragedy. In composing La nuova Euridice secondo Rilke (The New Eurydice According to Rilke), Salvatore Sciarrino looks back to the ancient Greek myth of Orpheus and Eurydice, filtered through the profound musings of Rainer Maria Rilke’s The Sonnets of Orpheus. Mahler’s approach to catastrophe in his Sixth Symphony is more abstract, yet his musical characterizations of his wife Alma and himself in the first movement can readily form the basis for a conceptual narrative.

As in many of his compositions, in The New Eurydice, Sciarrino (born 1947) attempts to create a new way of listening to music – permeated with modernisms to communicate the dramatic essence of the text if without eschewing lyricism. Sciarrino found Rilke’s retelling of the Orpheus and Eurydice tale to be insightful and profound, and tries in his music to comment on paradoxical issues emerging from the poems and the underlying Greek myth. Set in two parts, each to one of two Rilke poems, both translated into English by the composer, the work concentrates on a quasi-recitative and even operatic vocal line. To evoke a sense of the turmoil expressed in the poetry, Sciarrino sometimes has the singer repeat words or phrases or stagger them confusedly. The orchestra primarily offers brief comments on these expressions with scraps of material sounded in creative ways. Barbara Hannigan, for whom Sciarrino wrote this work, delivered an impressive performance that brilliantly combined intense outbursts of emotion with more meditative expressions. Antonio Pappano kept the forces at bay, allowing occasional intrusions to enhance the dramatic effect rather than overwhelm it.

He and the Santa Cecilia Orchestra come to Mahler 6 with some experience, having recorded it in 2011 for EMI (now Warner Classics). Establishing a strong, muscular march-beat to begin the first movement usually portends well for what follows, because the main tempos of all four movements are related (if the Andante is taken in eight beats to the bar). Had that steady beat been maintained with some consistency during the opening movement, Pappano’s reading might have been more cohesive. However, from the beginning of the development section, he pushed the tempo willfully, so when the recapitulation was reached, the original tempo was miles ahead of where it began, which made the closing frantic. Pappano did hold back slightly for the countervailing ‘Alma’ theme, as if trying to divert the hero from his maddening course to a fateful end.

Notwithstanding the program listing, Pappano (as in his recording) chose Scherzo-Andante order for the middle movements. Taking the former at about twice as fast as the preceding movement (when they should be in about the same tempo), Pappano made it sound more like Beethoven, but he effectively heightened the contrast between the first subject’s club-footed triple-meter stride and the second’s pirouetting, sometimes strutting, minuet. A cantabile quality permeated the lyrical theme of the Andante and brought a feeling of serenity, but its poignant restatement, a passionate plea for relief from torments, did not assuage its elegy.

Alight with fire and propulsive motion, even more urgent than in the first two movements, the Finale became a battle for survival for the hero, who relentlessly combats the negative forces within him. Pappano’s dramatic treatment of this half-hour-long movement produced some extraordinarily explosive passages. A startling first hammer-blow was answered by frenzied strings, and the lead-in to the second blow (slightly less powerful, as Mahler directed) had ominous foreboding. But thereafter, with the exception of a few brief moments for a breath, the pace became increasingly rapid, the hero hurtling to his fate. Eschewing the third stroke (that Mahler discarded but some conductors reinstate), Pappano surged forward to the mysterious brass chorale that ushers in a cataclysmic explosion of A-minor, during which timpani pound out the Fate motif. Neville Cardus, one of England’s greatest Mahler scholars, describes what follows as clumps of earth flung into a grave.

Pappano may have overplayed his hand in pressing tempos, but generally this was a stirring, vital and exciting performance, marred only by some spotty playing at times.