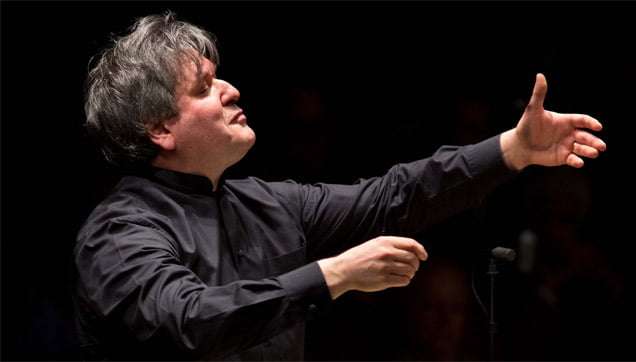 Antonio Pappano has been music director of the Rome-based Santa Cecilia Orchestra since 2005, and the way it played the Rossini spoke volumes about the high-bar values that can be established long-term. La siège de Corinth opened Rossini’s Paris phase and was a re-working of Maometto II. The Turks are laying siege to a Greek town, and there are some militaristic touches in the incisive, not to say curt, opening of the Overture, and then a slow processional adds pomp. But Rossini was a master of the bouncy and sparkling allegro, and also crescendos steeped over numerous bars. Both feature here, in music that suggests the ensuing opera is as much buffa as seria, and you can’t get a better performance of the tunes-a-plenty Overture than this, played with precision, deftness and total commitment, with exciting exchanges between the antiphonal violins, and including the presence of a cimbasso, a member of the trombone family with tuba leanings.

The scene was set for Yuja Wang. The majestic introduction found her rippling with Tchaikovsky’s own figuration (familiar now from Kirill Gerstein) rather than Siloti’s grandstanding emendations, but the rest of the first movement was a series of oppositions – to the extent that it didn’t gel and with the occasional suggestion that pianist and conductor were accommodating each other without developing a true agreement, she powerful and muscular and also with a delicacy that came across as either off-the-cuff or contrived. The slow movement though was enchanted, a little slower than the norm, quite dreamy, with fine solos from flautist and cellist, and the rapid middle section was as light as thistledown, like fireflies illuminating the night. For the Finale Wang was a tigress out of the traps, but there was flexibility, too, and if her fingers were a blur, the music was not, a tribute to her transcendental technique (shared by other pianists of course), but this wasn’t necessarily the most galvanising or the most insightful account of this ubiquitous work you’ll ever hear. 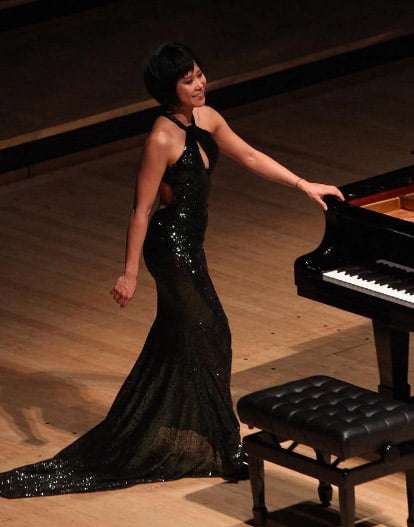 As if to compound such mixed feelings, Wang’s first encore was Liszt’s transcription of Schubert’s song ‘Gretchen am Spinnrade’, in which originator and arranger can be heard as having equal billing, and of which Wang gave a quite lovely account, and then, well, Mozart’s ‘Turkish Rondo’ (from K331), for a few bars, before jazz, ragtime and ‘anything goes’ took over, for which I believe Volodos can take the blame or the praise, depending on your point of view; steaming-hot pianism from Wang, to be sure.

From Respighi’s Roman Triptych, we heard Fountains of Rome and Pines of Rome. Both were premiered by the Santa Cecilia Orchestra, Fountains in 1917 conducted by Antonio Guarnieri, Pines in 1924 under Bernardino Molinari. Both are masterpieces of invention and colourful large-orchestra scoring.

These were wonderful outings under Pappano’s athletic direction, refined, mysterious and gently suggestive at the start of Fountains, a day in the life of four of them, from dawn to dusk. The sensitivity of the opening and close was something to marvel at (balances and dynamics spot-on), and if the ‘Trevi Fountain at midday’ could have been more expansive, there was plenty of organ-underpinned force to reckon with. Pappano went straight into Pines – smart move – scintillating and playful to begin with (the tumble to silence hijacked by a mobile phone, though), sepulchral when the neighbouring catacomb is sighted (including a well-judged off-stage trumpet solo, beautifully played) and then a blissful time spent at the Janiculum, with miraculously quiet clarinet-playing conjuring a rapt atmosphere, and even more captivating when the nightingale enters (Respighi’s requested Brunswick acetate now in digital plumage, and also ideal in a from-afar perspective), before the ghostly legionnaires reform along the Appian Way – from black-and-white to Technicolor in a few minutes, aided by three sides of extra brass: superbly managed and stunning.

Two encores too from the orchestra, Valse triste, originally part of Sibelius’s incidental music for Kuolema, and which here included one of the most understated pianissimos I have ever heard, a just-audible thread of sound, darkly dreamlike, and then The Lone Ranger galloped into town courtesy of further Rossini, the final part of the Overture to Guillaume Tell, the concert turning full-circle to French opera and leaving in no doubt that the Santa Cecilia Orchestra is the apple of Pappano’s eye.