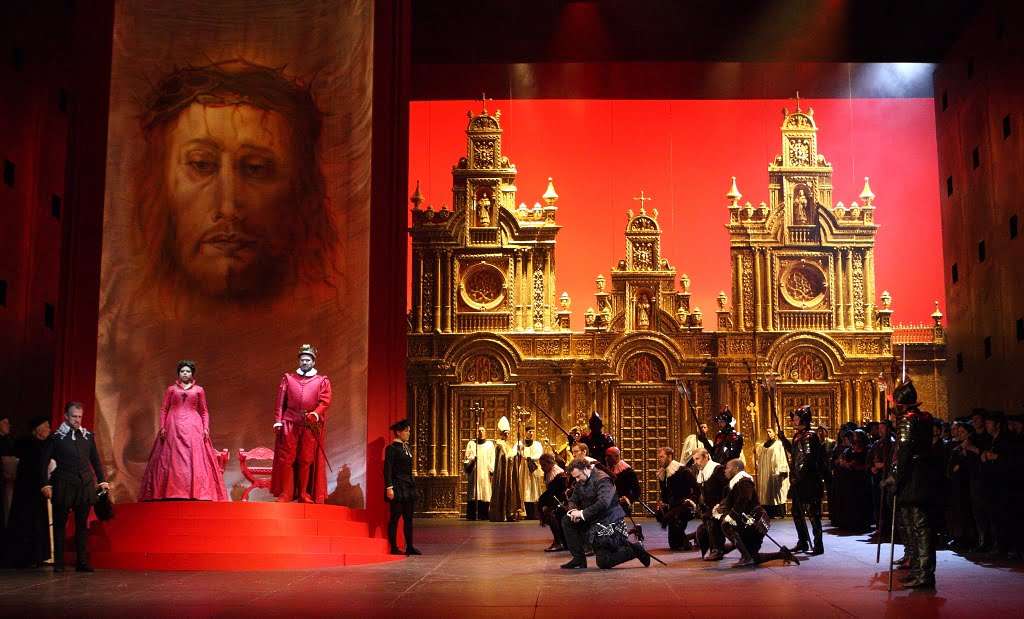 Not surprisingly, Nicholas Hytner’s 2008 production of Verdi’s wildly romanticised historical blockbuster has an unstoppable, rather West End momentum that seamlessly folds all the personal and political intrigues and the tensions between Church and state in King Philip II’s court in sixteenth-century Spain out of the big set-piece tableaux. This is enhanced by the neatly executed scene-changes, which not only isolate the lead role, but also emphasise that little gets in the way of individual characters up against their fates.

The staging is back for its third revival, using the Italian translation (hence the title Don Carlo) of the original five-Act French version (known as Don Carlos), just one of the editions of an opera as textually complex as a Bruckner Symphony. Bob Crowley’s costumes are handsome and in period. His sets, especially those for the outdoor scenes set in the forest of Fontainebleau, the monastery garden and the cathedral plaza for the auto-da-fé lean towards a simple surrealism with sharp cut-out shapes and exaggerated perspectives. The interior scenes, though – King Philip’s study and his father Emperor Carlos V’s tomb – are much more atmospheric and have the sort of enclosure and isolation that is mirrored in Verdi’s most Wagnerian score, taken much further by the huge pierced screen that descends between scenes to filter out the fierce Spanish heat and light. 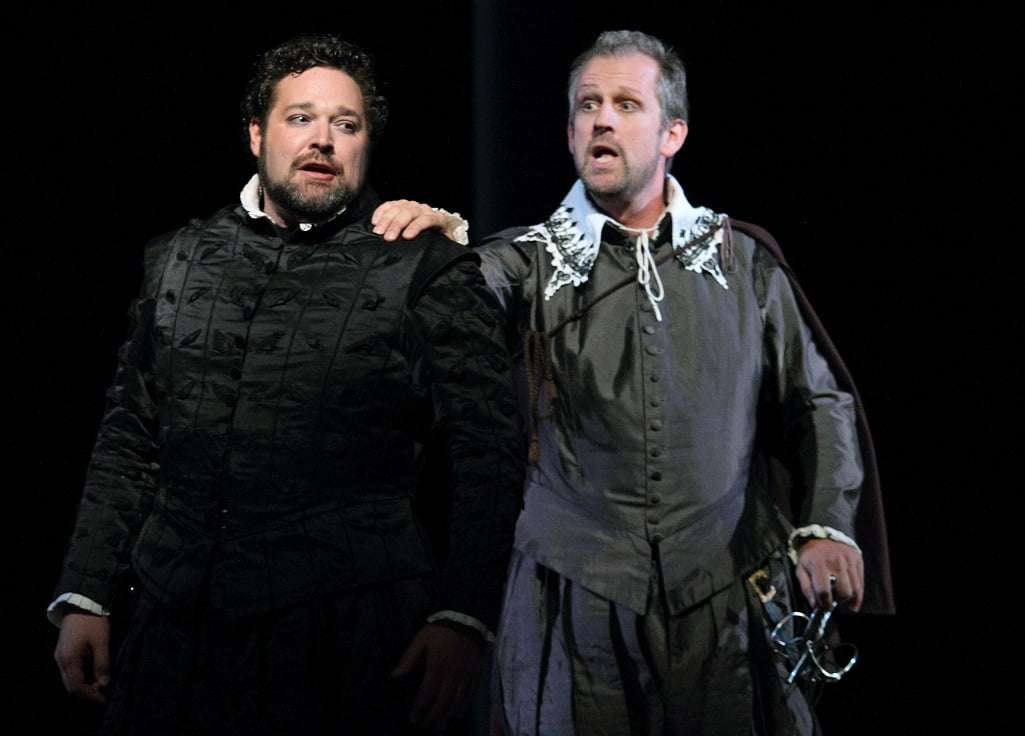 In a cast with five leads whose fates are all intertwined and whose drama requires a large-scale approach to ensemble, it was unfortunate that the original Elizabeth and Posa had to withdraw, but for the most part the cast is powerfully interactive. Bryan Hymel is every inch a heroic Prince – in marked contrast to the man as reported in history – his voice as fresh and strong in Act One’s ‘Foresta immensa’ as it was for his closing duet with Elizabeth in Act Five.

The opera’s sequence of one-on-one confrontations has proved to be Hytner’s strongest suit, but Hymel cut a rather two-dimensional figure with Kristin Lewis’s Elizabeth. And, as with Hymel, there seemed to be nothing her spinto-soprano couldn’t do, travelling effortlessly from her capacious mezzo voice to her gleaming heights and spinning miraculous control of tone and dynamics. Crucially, the only thing she didn’t reliably convey was Elizabeth’s pathos and vulnerability, while Hymel was infinitely more secure in his scenes with his one loved and trusted friend Posa. And no wonder, considering the breadth and subtlety of Christoph Pohl’s performance, enhanced by his cultivated baritone supporting, containing and characterising Hymel’s brilliance and ardour. Their singing got to the heart of their famous duet, and just as you thought that Posa was a bit too well-behaved, his flashpoint with King Philip over the Flemish problem was sharp and shocking. 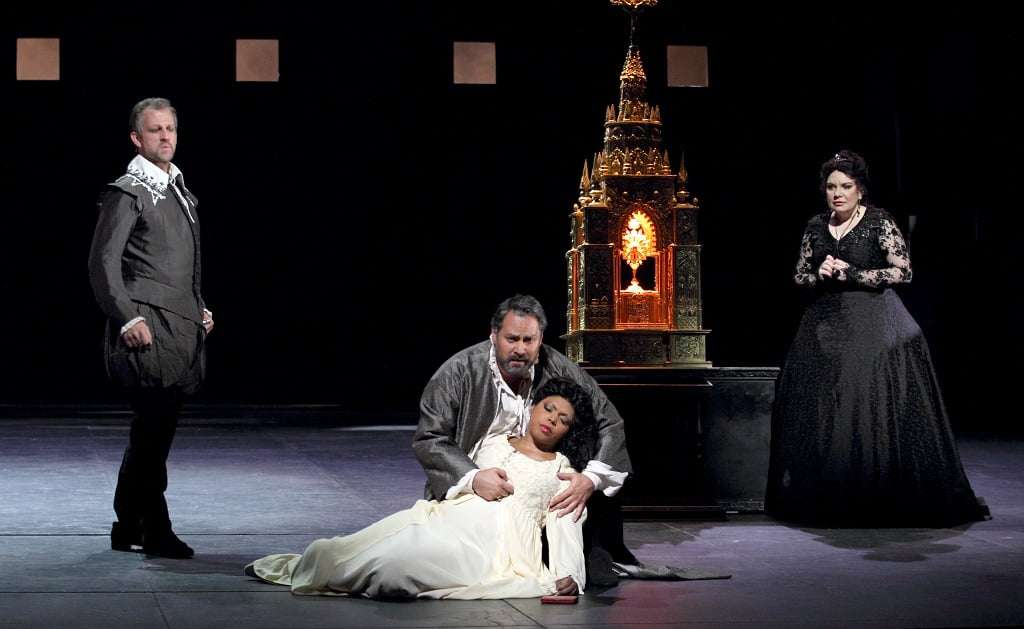 Initially I worried that Ildar Abdrazkov’s King Philip was too light and too young for the ageing, rigid monarch, but his authority quickly grew and his voice expanded in weight and darkness to make his Act Four soliloquy a high point of the evening. Ekaterina Semenchuk was similarly convincing as the scheming Princess Eboli. Not every sound she delivers is beautiful, but it is done with immense style and with total fidelity to Eboli’s character – there were no doubts about her capacity for vengeance, nor about her self-awareness in an excoriating ‘O don fatale’. She, Abdrazakov and Pohl all acted through their music and stoked up their characterisations immeasurably.

In the smaller roles, Angela Simkin (another cast change) is a poised, bright Tebaldo, and Paata Burchuladze a formidable presence as the blind Grand Inquisitor. The members of the Chorus were in superb voice, their movements a bit too blocked for my taste – and I wish their shouts and curses in the auto-da-fé could be dropped. Bertrand de Billy’s conducting doesn’t overplay the score’s monumental and swaggering moments, his overview of the opera matches Hytner’s, and he never failed the singers, the orchestra producing some outstandingly lyrical and transparent playing. With its Italian translation of a French libretto based on a German play subtitled in English about events in Spain revolving around Flanders (now a bit of Belgium), this is a euro-pudding of an opera. Perhaps Carlos’s and Posa’s duet could replace Beethoven’s ‘Ode to Joy’ as the Euro anthem.