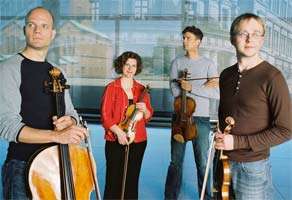 The Berlin-based Artemis Quartet demonstrated in this Beethoven programme that it ranks among the leading ensembles. Although the group was founded just over 20 years ago, its international career was not launched in earnest until its debut recital at the Berlin Philharmonie in 1999. The Quartet’s current membership, however, dates back only to 2007 when violinist Gregor Sigl and violist Friedemann Weigle joined the ensemble. But the innate sense of communication among these four musicians belies the relatively short time they have been performing together.

The Artemis’s outstanding playing created what was at once a seamlessly blended ensemble and a conglomeration of four distinctive and individually discernible voices. The ‘inner voices’ of the second violin (Sigl) and viola (Weigle) came through especially clearly, whether in support of a soaring melodic line or stepping forward on their own to take over the spotlight. Natalia Prishepenko’s playing on first violin was accurate, supple and expressive, her instrument’s distinctive timbre contrasting pleasantly with that of Sigl’s violin. Cellist Eckart Runge played superbly, both in providing bass underpinning for the other instruments and in solos that were beautifully intoned throughout his instrument’s range.

As is often the case with Beethoven concerts, the programme consisted of a representative work from each of his ‘early’, ‘middle’ and ‘late’ quartets, but the specific pieces performed in this concert were particularly illustrative of Beethoven’s compositional and spiritual development. The G major, Opus18/Number 2, came at a turning point in the young composer’s career, as the influences of Mozart and Haydn were giving way to the emergence of Beethoven’s new and often radical musical ideas. The ‘Serioso’ Quartet, the last of the ‘middle’ quartets, also reflects a transition toward a more complex and intense compositional style. The concert built to an intense climax with the Opus 132, which is among the mature Beethoven’s most profound and powerful emotional outpourings. The Artemis players demonstrated a fine grasp not only of the stylistic characteristics appropriate to each stage of Beethoven’s career, but also of the composer’s progression from one stage to the next.

In the opening Allegro of the G major Quartet, the Artemis’s playing was delicate and high-spirited, but never out of control, with the influence of Haydn quite tangible. The flow of the music was, unfortunately, broken by allowing late-arriving patrons to be seated after the first movement, but the interruption was soon put out of mind by the Adagio cantabile, with Prishepenko’s florid melodic line accompanied in mellow tones by her three partners. Their performance emphasised the witty character of this work, from the surprising interjection of a dance-like Allegro into the midst of the Adagio cantabile to the bouncy scherzo and jocular finale.

There was plenty of brio in the dramatic unison motif that abruptly opened and recurred throughout Opus 95’s Allegro con brio first movement. This quartet is densely packed with melodic, harmonic and rhythmic surprises, with very little perfunctory or superfluous padding, and the Artemis Quartet performed it in fittingly compact style. Tension from the jarring key change to a descending cello scale at the outset of the Allegretto gave way to a lyrical melody and intricate fugal passages, the movement growing in intensity as it progressed to a gentle finish that led directly into the vigorously impulsive scherzo. The transitions in the finale from the introductory Larghetto to Allegretto agitato, and later to the brilliant major-key coda, were very subtly managed. This coda foreshadowed the A minor quartet, composed some 15 years later, in which Beethoven also chose to end a minor-key quartet in the major, making their juxtaposition in this recital all the more interesting.

The focal point of the A minor Quartet was the central Molto adagio – the ‘Heiliger Dankgesang’, Beethoven’s hymn of thanksgiving for his recovery from a serious illness, written in the Lydian mode to set it apart as well as to emphasise its ecclesiastical character. It was played with searing emotion that was only intensified by the contrast of two bright, dance-like interludes titled “Neue Kraft fühlend” (feeling new strength).

The Artemis players by no means neglected the other movements. They created an engaging overall arc that began with the dark introductory Assai sostenuto passage and ensuing Allegro, with faster-paced and less emotionally charged movements serving much as intermezzos before and after the Molto adagio, and finally building to an uplifting conclusion in the Allegro appassionato, with its major-key ending emerging even more subtly than had the Serioso’s coda.