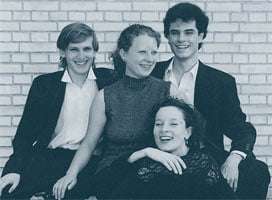 This string quartet names itself after a character in “The Master and Margarita” by Mikhail Bulgakov. Asasello, “ambiguous and polyvalen”, looks forward into the future and back into the past, like Janus, Mephistopheles and Prospero. The quartet sets out to be traditional and adventurous, original yet faithful – “to make the strange familiar and to make the familiar strange”. This is not just word-spin: the paradoxes succinctly assert the quartet’s search – and, not least, its achievement. This was its Wigmore Hall debut.

The Asasello played Haydn as though he were a man of today: cool and relaxed, and much less formal than 18th-century tradition implies. There was nevertheless – and deliberately, I assume – a clearly stated reminiscence of the classical poise of the Enlightenment. The extensive slow movement held a grave, rich beauty that was a masterpiece of sensitivity and restraint, quite unlike the wayward, technicolour antics of The Lindsays a few years back. In its concern to maintain the Presto marking for the last movement, however, the Asasello Quartet jettisoned opportunities to be charming and cheeky.

Michael Jarrell describes his Zeitfragmente as reflecting Saint Augustine’s delineation of past, present and future as different views of the same segment of time. It was written as a commission for the Witten Festival in 1997 and is dedicated to the Asasello Quartet. It begins with the grating growl that seems to be de rigueur in modernist compositions – a big, rasping bang, far removed from the primaeval turmoil that Haydn depicted about 200 years earlier. An extended middle section presents various sonic views – an album of sound-snaps, maybe. This section, if section it was, is overlong and puzzlingly episodic. The ending steadily takes shape as serene and stellar.

The Kurtág seemed sedately orthodox by comparison. Hints of melody and wisps of harmonic change appear and withdraw. There is also characteristic brevity: another album of sound-snaps, perhaps, each one in focus, making its point effectively – affectively, too.

Jill Crossland joined the Asasello Quartet for Brahms’s Piano Quintet. This was a performance of youthful verve and enthusiasm – rhythmic and vigorous, with a keen sense of Brahms’s many adroit changes in timbre, his skittish delicacy and light emotional finesse, his forward, passionate thrust and, in the slow movement, a majestic stillness. This distinguished performance had gusto, passion, charm and a delightful, unexpected variety, giving the lie to any notion of Brahms’s music being an endless roll of homespun cloth. Crossland produced a full-blooded tone of imposing vitality, as though she had been playing Brahms with the Asasello musicians for years.