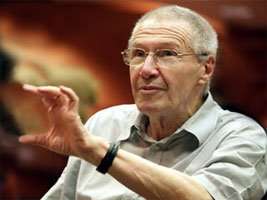 For the third and final Berliner Philharmoniker concert at Carnegie Hall, Sir Simon Rattle juxtaposed György Kurtág’s first large-scale symphonic work (from 1994) with Mahler’s last, which was left unfinished at his death in 1911.

It was a fitting combination, as the brief Stele is a symphonie funêbre in three continuous movements. Written for a large orchestra with greatly expanded woodwind and brass sections, the work lasts only about fourteen minutes. Reminiscent of Beethoven’s Coriolan Overture it starts with a timpani stroke and open octaves in the strings (but on G instead of C), which immediately dissolve into a transparent orchestral fabric of many different colors and shades, with sorrowful interjections of melodic seconds by different woodwind instruments. The second movement, ‘Lamentoso disperato’, is in contrast quite rhythmic, beginning with a buzzing motif in the strings, which is gradually augmented by the rest of the orchestra and builds to a resounding climax. The finale, the longest of the three sections, almost static, is marked Molto sostenuto. It consists almost entirely of pulsating waves of sound, accompanied by muffled bass drum strokes, interspersed with soft interjections by different groups of instruments. It is based on a piano piece Kurtág had written just a year earlier, in 1993, in memory of his friend András Mihály, a composer and conductor.

When Gustav Mahler died in May of 1911, he left behind a draft score for a Tenth Symphony in various stages of completion. While the opening Adagio and the third movement ‘Purgatorio’ had been almost entirely orchestrated, the other three movements were written in short score, often featuring nothing more than a single line and some indications as to instrumentation. The history of this work is a long and complicated one, but suffice it to say that, as a facsimile of the sketches had been published in 1924, it was inevitable that attempts would be made to finish the symphony. The composer’s widow Alma did not succeed in having either her then son-in-law Ernst Krenek nor Mahler’s admirer Arnold Schoenberg have a go at it, but one person who did was Deryck Cooke. With the assistance of conductor Berthold Goldschmidt and the composers Colin and David Matthews, who usually don’t get the credit they deserve, he eventually produced several ever-more inclusive and refined “Performing Versions” of the score, making it very clear that he did not consider them “completions”. By now we have a total of six versions of the score available, but Cooke’s, as faithful to the original sketches as possible, remains the most frequently performed of all. Kurt Sanderling was an early champion of it, making many adjustments to Cooke’s score, some of which, in addition to his own, Sir Simon has adopted during his continuing efforts to establish it as Mahler’s last work. 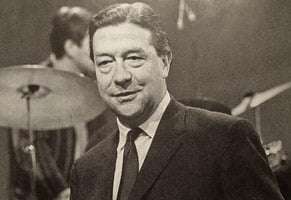 While we will never know whether Mahler actually instructed his physician to burn the sketches after his death, we can be thankful that this was not carried out; the work contains many wonderful passages we wouldn’t want to be without. However, we can be absolutely certain that, had he lived to complete it, this is not the work we would hear today. Mahler was well known for extensively reworking his compositions between the sketch phase and the final version, for his contrapuntal skill, which he surely would have brought into play where only single lines exist in the draft, and for his abilities as an orchestrator which had reached such a high level of refinement and innovation in his late life.

What we hear today as “Mahler’s 10th Symphony”, especially in the second, fourth and fifth movements, can only be a tantalizing glimpse at a rough draft, and many conductors still chose to perform only the Adagio and, sometimes, the ‘Purgatorio’ for that very reason. Simon Rattle has a long history with this work, having first recorded it with the Bournemouth Symphony in 1980. While one assumes that being intimately familiar with a composition leads to more profound insights, there also is the danger of getting obsessed with its details. The opening solo for the viola section was shaped to within an inch of its life, instead of simply letting it ‘be’, drifting in out of nowhere, a wistful prelude to the warmth of the first theme. But this was missing as well; the heart seemed to have been taken out, no sweep to the sound here or any irony later. And when Mahler finally reaches what is perhaps the most dissonant and jarring outburst he had ever written, gradually piling up nine pitches on top of each other, the whole orchestra supposed to scream at top volume, the effect strangely was less than one would expect, both here and in the even more extended analogous spot in the last movement.

The two scherzos were well executed but rather uneventful, moving along, but not really adding up to a coherent whole. Here above all one has the sense that Mahler probably would have made extensive changes, tightening the structure, and adding interest by varying the orchestration. Similarly in the ‘Purgatorio’, since the composer left no instructions as to how the Da capo section should be altered, Cooke decided to restate it literally, something Mahler never did.

At the beginning of the last movement Mahler asked for several muffled drum strokes. Alma tells us that hearing a fireman’s funeral ceremony from the eleventh floor balcony of their hotel in New York in 1908 inspired this. Rattle decided to put the drum off-stage, but far from being muffled, the interjections sounded like cannon shots. This added a certain theatrical effect to the otherwise forlorn opening section, but seemed totally at odds with the effect one imagines Mahler had in mind. Unfortunately the tuba soloist did not have one of his finest days, and when the flute finally started what must be one of Mahler’s most celestial melodies, that section of the movement remained earthbound.

Having listened to this orchestra for about 25 years, what was striking and very disconcerting during the whole performance was the sense that there was a major orchestra playing well, but where was the Berlin Philharmonic? It used to have a distinctively rich, even lush string sonority, which would have been perfect for the outside movements of this symphony and was sorely missed. When Herbert von Karajan brought the orchestra to Carnegie Hall in 1982 there was only one stand of strings more in each section, but the visceral effect was simply overwhelming. Besides volume, there was a depth to the sound and a physicality to the playing; at the same time one had the sense of listening to the world’s largest chamber orchestra, a family of musicians highly attuned to each other, listening, and interacting. Much of this was still in evidence under Claudio Abbado, but starting at the end of his tenure a lot of personnel changes started to happen quickly. It is a very young orchestra now, and unfortunately a lot of the newer musicians never had the chance to absorb the style of playing one enjoyed listening to in the past. If one wants to hear what the Berlin Philharmonic used to sound like, the next best thing now is the St Petersburg Philharmonic.