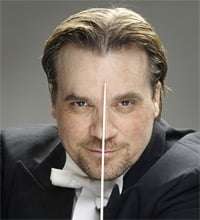 This latest tour by the Australian Chamber Orchestra featured a programme that was audacious indeed, with dynamic Finnish violinist and conductor John Storgårds leading the ensemble as guest director through a series of works that ranged from the attractive and accessible to, for a first-time listener, the impenetrable.

The inclusion of the two outer works, Lithuanian composer Jurgis Juozapaitis’s 1988 Perpetuum mobile and Jean Sibelius’s Impromptu, was obviously designed to ease the audience into, and provide a gentle exit from, a more challenging central core. The former work nods both to the Minimalist aesthetic and to the expansive layering of choral pieces like Thomas Tallis’s “Spem in Alium”; the latter, cobbled together from two of Sibelius’s piano Impromptus by the composer, has an ABA form that moves from darkness to light to darkness again.

The four movements of Storgårds’s compatriot Eero Hämeenniemi’s 1996 Chamber Concerto all feature sections within which the soloist is allowed to improvise, thus personalising the work to a more marked degree than would otherwise be possible in a more thoroughly composed concerto.

Japanese composer Toshi Ichiyanagi’s Interspace for String Orchestra (1987) is a reworking of the third movement of his Second String Quartet of the same name; full of spectral effects like glissandos and harmonics, it paradoxically unites stasis and expansion in its deftly woven textures.

Lutosławski’s superb Preludes and Fugue for 13 Solo Strings was commissioned by American conductor Mario di Bonaventura and first performed in 1972. Comprising seven preludes and a massive, final fugue, the work combines aleatory and strictly composed elements, thus recalling to some extent the Hämeenniemi while moving far beyond it in terms of scale and conception.

If the two outer works showcased the ACO’s superb string tone and continuing empathetic engagement with both the immediately appealing and the more traditional, tonally-based repertoire, the three central works allowed it to reveal the more edgy, darker aspects of its collective musical consciousness, as well as its extreme virtuosity. In the Hämeenniemi, Storgårds led by example, his improvised sections revealing a seemingly boundless musical imagination matched by an equally uninhibited technical facility. He seemed to employ every trick in the book, from outrageously fast figurations and savage chordal passages to whistles (his own, not the violin’s), pops, squeaks and pizzicato passages of great inventiveness. His bowing, especially, was nothing short of astonishing in its variety of tone and attack, while his interaction with the members of the ACO seemed like that of a General barking orders to troops, who would then affectionately respond with dashing feats of heroism.

To separate this work from the Lutosławski with the Ichiyanagi and an interval was a smart move; while still not exactly an easy listen, Interspace did at times take on the aspect of a lotus slowly blooming, which seemed an appropriate preparation for Lutosławski’s complex organicism. In the latter work, the ACO (here standing in a semi-circle before Storgårds), gave much weight to the distinct character of each Prelude, while the Fugue seemed to rise up like Gaudi’s Cathedral, spectacularly glittering and multi-faceted.

After all that had gone before, the Sibelius, which in its brevity and attractiveness stood in lieu of an encore, fell like gentle rain.