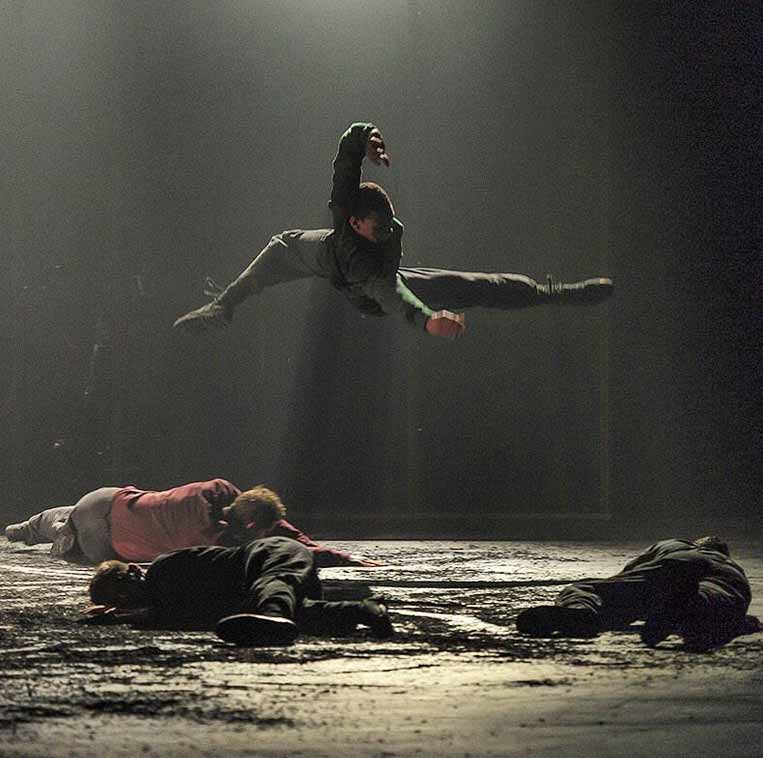 Heroism and courage are truly in short supply; in keeping with the prevailing zeitgeist that focusses on the human cost of war, the destruction of minds and bodies, the admirable company BalletBoyz’s new show Young Men makes for disturbing viewing. Drawing on the 100th- anniversary of the First World War, choreographer Iván Pérez puts his 13 dancers through their paces in a non-linear exploration of the effects of armed conflict in such sections as ‘Gas, Gas, Gas’, ‘Leap of Faith’ and ‘Shell Shock’. What emerges is mightily impressive, from Pérez’s own movement-palette that, in groupings is reminiscent of Hofesh Shechter’s approach, to Keaton Henson’s score – played live by an ensemble just visible through the mottled screen at the rear of the stage – that recalls the rhythmic pulse and string-heavy compositions favoured by director Peter Greenaway in his films. There is highly effective sombre, moody lighting from Jackie Shemesh, although I was less convinced by Carlijn Petermeijer’s costuming, which favoured baggy zouave trousers and only evoked the specific period when coupled with undershirt, braces and puttees.

The company’s 11 men are here supplemented by women who leaven the mix and allow, particularly in the first section ‘Aftermath of War’ for suitable grieving and anguish. And this is where my caveats enter; there is a great deal of anguish on stage in the ten sections but there is no place for the above-mentioned heroism and courage, which were undoubted aspects of the First World War and, indeed, all armed conflict, nor much camaraderie, replaced in Young Men by a febrile, unstable esprit de corps, nor humour or levity, which is an acknowledged human reaction to periods of great stress and danger, nor ‘faked’ normality, as ordinary tommies attempted to established little routines to make sense of the chaos around them. In essence, Young Men strikes a single note and maintains it throughout, variance is largely absent. 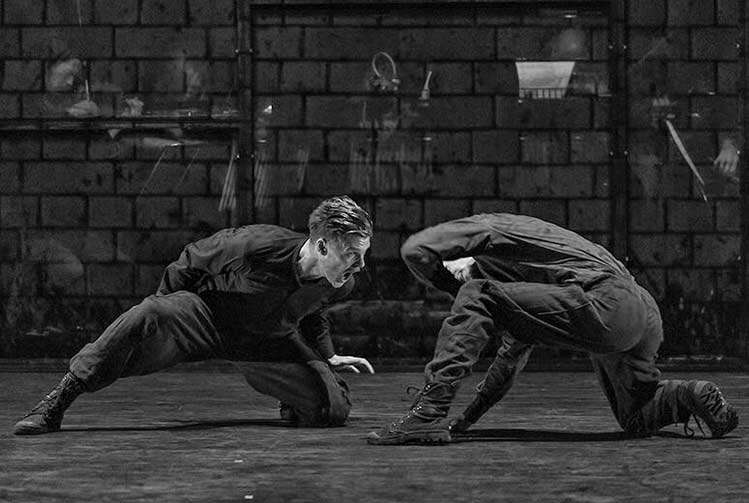 That said, what the company does and the intensity of its performance cannot be gainsaid – a disparate company with dancers from many backgrounds, trainings and displaying different physiques, they are forged into an ensemble of uncommon power. It would be invidious to highlight individuals, but Andrea Carrucciu, stripped almost bare in the section ‘Shell Shock’, stands out for his disturbing portrayal of a man disjointed and dislocated by his experiences in the trenches, twisting and distorting his body to convey the mental anguish of his condition. Some of the ten sections are more effective than others – I was particularly struck by ‘Lonesome Dark’ in which one man ensnares others – at first we think it is another portrayal of brutality, but instead of smothering his prey, he embraces them, a desperate quest to establish some human link or bond to relieve his loneliness.

Finally, he mimes a revolver with two fingers which he inserts into his mouth – the inevitable endgame of hopeless isolation – curled up on the stage, he is immediately covered by a load of what seems like ash or soil dropped from above. It makes for a startling and powerful image. Young Men examines the effect of war on the young men whom old men send to war. As a full evening’s work, it is uneven, and is less broad in its artistic portrayal than it could have been; it remains, nevertheless, a considerable achievement, and another step towards artistic maturity for this impressive ensemble.