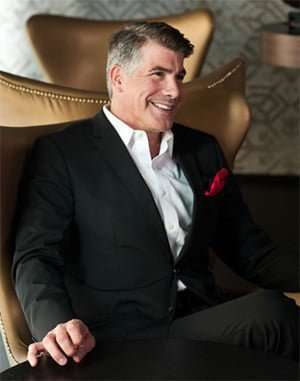 Actor and singer Bryan Batt is making his London debut at The Crazy Coqs cabaret venue. A veteran of the New York stage, his roles having included Lumière in Beauty and the Beast and Monty in Saturday Night Fever, and he was one of the cast of the enormously popular, wickedly satirical revue Forbidden Broadway. He dances too! In the UK, he is best known for his portrayal of advertising executive Sal Romano in Mad Men, set in the 1950s. In the third season, he figured in one of its most memorable episodes, when Sal, while preparing for bed, excitedly tells his wife that in a casting coup the musical star Ann-Margret is going to feature in one of his firm’s advertising campaigns. As he describes the number she is going to perform, he becomes more and more immersed in his re-enactment of her routine as it dawns on his wife that she is married to a gay man. It was a stunning sequence, but sadly his character was subsequently dropped from the series (prompting much audience protest).

Batt’s sense of drama gets full play in his excellent cabaret act, in which an eclectic selection of songs is given their full value in his strong-voiced renditions, the numbers linked by engaging patter, including amusing biographical anecdotes about childhood in his hometown of New Orleans. It was the disaster of hurricane Katrina that started his career as a solo performer – he was asked to mount a show to raise money for the victims of the floods. While many club performers are notoriously sensitive about refreshments being served during their act, Batt disarmingly urges his audience to order drinks while he performs. “The more you drink, the better I am!”. He tells us of his love for London, New York and New Orleans, and for one decade in particular – the 1960s, cueing some Bacharach & David numbers and Tony Hatch’s irresistible ‘Downtown’.

Batt talks liberally of his parents, the influence his mother had (he recalls using her hairbrush as a mock microphone) and his father’s love of baseball. Craig Carnelia’s ‘What I call a dream’, from the 1984 off-Broadway musical Diamonds, is a fantasy about being a champion player – Batt’s father, alarmed at his son’s enthusiasms, suggested he join the ‘Little League’, a prospect that did not thrill Batt until he discovered that it involved wearing costumes! The tale of the father-son relationship reaches an unexpected, and touching, climax.

It was Batt’s mother and grandmother who took him to his first Broadway show – Gilda Radner Live – and he sings the outrageously scatological number, ‘Let’s talk dirty to the animals’, with which Radner opened her performance. Other comedy highlights include Lawrence O’Keefe and Neil Benjamin’s equally naughty ‘Sensitive song’ and Pete Mills’s lament of a camp caveman, ‘Way ahead of my time’. Mills also wrote, in the wake of the New Orleans flooding, the plaintive ‘It’s amazing the things that float’ (“the things that are found in a world without ground”).

Batt’s other numbers, with the sterling accompaniment of James Church, include Maury Yeston’s ‘Unusual way’ from Nine, Cole Porter’s ‘Night and day’, William Finn’s ‘Infinite joy’ and Billy Joel’s ‘New York state of mind’. Occasionally Batt’s employment of the ‘big finish’ seems inappropriate – his warbling of the ballad, ‘Do you know what it means to miss New Orleans?’ is very touching until the tempo builds, but most numbers are superlatively expressed, none more so than the Jerry Herman anthem, ’I am what I am’. Batt is rumoured to be strongly favoured for a return to Mad Men for its final series. One hopes so; and also that he finds time to make a return visit to brighten London’s cabaret scene.