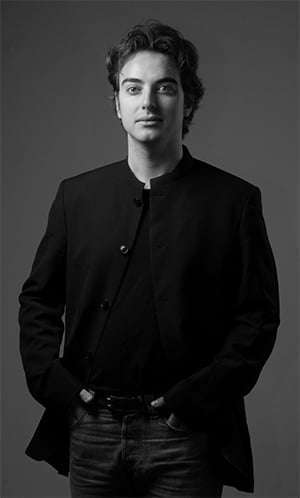 Pair Mozart’s music with Beethoven’s and you get a profound sense of musical history: the latter was nearly fifteen years younger and only a teenager when he went to Vienna hoping to study with the older composer. The two prodigies, who may or may not have met but were mutual admirers by some accounts, are a centerpiece of this summer’s Mostly Mozart festival at Lincoln Center. Separate events brought together their timeless voices in intimate style – the first on a revamped stage in Avery Fisher Hall that has audience members surrounding the Festival Orchestra, and, later, in the tenth-floor penthouse across the street to hear the eloquent and captivating Leipzig String Quartet.

In the main concert, Jérémie Rhorer led a program of three pieces that offered “fresh looks at old traditions”. The merry overture to The Marriage of Figaro mimics the opera’s comic tone – unlike other overtures of Mozart’s time that barely referenced the plot. The sweet and busy passages demand crisp playing, so when the orchestra fell short on precision, mostly at the start of some significant phrases, the performance sounded particularly sloppy and loose.

Similarly, in K503, the woodwinds and horns made weak entries in the second movement. But overall the orchestra provided beautifully balanced accompaniment to Paul Lewis, who delivered a performance full of bright, clear notes. His right hand was especially effective in passages that resonated bell-like in the hall. Lewis created expressive turns of melody and elegant shifts in dynamics. He had successfully played this work at the Proms in London a week earlier.

Beethoven’s First Symphony has become overshadowed by those that followed, but one could imagine it at a time when it was his only Symphony. When Beethoven, then thirty, premiered the piece in Vienna in April 1800, it was hailed as a novel take on a genre steeped in the tradition of Mozart and Haydn (with whom Beethoven did study). The voice is distinctly Beethoven’s right from the start, with an opening cadence written in F instead of the work’s home key of C. The finale’s flurry evokes the cheeriness of Mozart, without the darkness of later Beethoven, and the hopping, skipping quality of Haydn. The orchestra’s rendering of the third-movement Minuet (more a scherzo) was the highlight. The players swelled, swayed and syncopated with good energy and motion, even if Rhorer seemed limited in his bag of conducting tricks. His gestures, reminiscent of Harry Potter waving his wand, lacked nuance and there were further flabby passages.

The pleasure of Mozart and Beethoven continued in a late-night recital in Stanley H. Kaplan Penthouse. With floor-to-ceiling views and complimentary wine to be sipped at candlelit tables, the atmosphere was wonderfully relaxed and intimate. Aptly entitled “A Little Night Music”, the series could easily be more about the sheer enjoyment of music than polished perfection. After delivering a little Mozart against a backdrop of sparkling city lights, the Leipzig players, all former members of the Gewandhaus Orchestra, offered a rendition of Beethoven’s ‘Serioso’ that showed off their soulfulness and skill. They pulled the most layered and sophisticated sounds from their instruments and each other – emphatic, tender, lyrical and powerful.