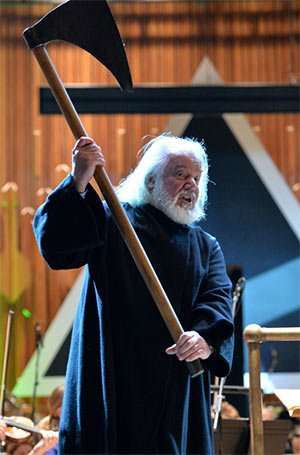 Not heard in Britain for 14 years, and only once produced outside of it (in a – quite literally, going by the photographs – car crash of a production from the Salzburg Festival last year, conducted by Ingo Metzmacher), this BBC Symphony Orchestra “concert staging” of Gawain returned to the longer original version, first given by the Royal Opera in 1991, and revived twice, though in a revised score, in 1994 and then 2000. It was no surprise that at the start of the Barbican Centre’s 80th-birthday tribute to Sir Harrison Birtwistle was jam-packed.

With Birtwistle and librettist David Harsent in the Hall and with John Tomlinson reprising his role as the Green Knight (he was also in the Salzburg production) there was a tangible buzz of expectation. Gawain – despite stage predecessors Punch and Judy, The Mask of Orpheus and Yan Tan Tethera – was the first work Birtwistle himself declared an ‘opera’ and its first impact was tremendous. Di Trevis’s production set on Alison Chitty’s memorable designs, with the stunning trompe-l’oeil effect of Tomlinson’s disembodied head singing, caused such a sensation that BBC2 took it for broadcast. When it returned three years later, it was somewhat shortened, and it was that version – again broadcast on BBC Radio 3 – that appeared first on the Collins Classics label, and which has now been reissued by NMC. Salzburg used the revised version and I had simply assumed that that was officially sanctioned and that I would never hear the original (and preferable) edition again.

So, I was taken by delighted surprise to learn that it was the first version that Martyn Brabbins was conducting. Running (with interval) over 3 hours 30 minutes it allowed us to hear the Act One tableaux ‘The Turning of the Seasons’ in its full, ritualistic glory, even though John Lloyd Davies had too little stage to equal the slow-moving majesty of the Royal Opera production at this point. Similarly there was nothing to dislodge memories of the mystery of the original Gawain, François Le Roux, holding up John Tomlinson’s head, still singing, although here – Tomlinson appearing at the back of the orchestra and Laura Aikin’s Morgan Le Fay lifting the Green Knight’s helmet aloft and moving it between the shocked attendees at King Arthur’s court – was a simple, and effective device to cope with what must be one of the trickiest stage directions since Shakespeare’s “Exit stage left, pursued by a bear.” 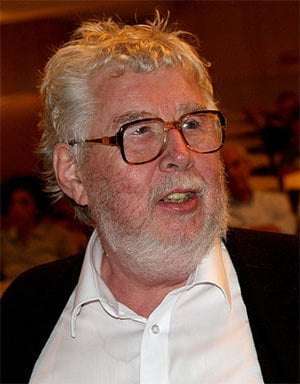 The restricted strip at the front of the stage and the necessity for music stands (all but Tomlinson were, at least in part, ‘on book’) limited the staging aspect, with the pattern of white (ley?) lines on black across the acting space seemingly constricting the area even further. Thus the ritualistic aspects of the piece seemed visually cramped, although musically they came across loud and clear. Morgan Le Fay and Lady de Hautdesert’s oft-repeated “This is the hour of legacy and loss / This is the hour of vanity or choice”, the Green Knight’s knocking at the door of King Arthur’s court, the Fool’s querulous “Who is it?”, the turning of the year and – in Act Two – the three hunts of Bertilak de Hautdesert alternating with the three temptations of Gawain by Lady de Hautdesert and, after each, the swapping of whatever favours were won between Gawain and Bertilak, and then the three attempts to chop Gawain’s head off, all produced a heady, mesmeric mix of music and metaphor.

Running throughout the opera is Birtwistle’s miraculous, dark and brooding music – a massive orchestra (including three tubas and euphonium!) but most often deftly deployed, with thrilling sounds, including the distinctive twang of the cimbalom and off-stage horn-calls in the hunt sequence. Masterfully marshalled by Brabbins (together with assistant conductors Christian Baldini and, for the off-stage BBC Singers, Andrew Griffiths) with a rock-steady beat, it was clarity at all times and Gawain’s rather ambiguous soundworld sprang to life. Mindful of Gawain’s compromised victory (the sash he receives in his final tryst with Lady de Hautdesert, which he doesn’t declare to Bertilak, saves his life but sends him into mental anguish), the score offers no easy answers and the opera ends as sombrely as it starts, perhaps even more so.

Matching the excellence of the BBCSO were the singers. In a role he created John Tomlinson remains utterly peerless, but was matched by new-to-the-title-role Leigh Melrose, with just the right amount of bravado to start and emotionally shattered to end. Four of their colleagues had also sung their respective roles in Salzburg: Laura Aikin was a superb Morgan Le Fay, beguiling and effortlessly lyrical, matched by the shadowy voluptuousness of Jennifer Johnston as Lady de Hautdesert; from the court Jeffrey Lloyd-Roberts was King Arthur and Ivan Ludlow was Agravain, while another – Brian Galliford – from the Salzburg cast, was replaced by John Graham-Hall as the Fool; a part that fitted him – both vocally and dramatically – like a glove. Completing the committed cast were Rachel Nicholls as Guinevere, countertenor William Towers as Bishop Baldwin and Robert Anthony Gardiner as Ywain.

Birtwistle and Harsent were greeted with a standing ovation at the end, the orchestra was awash with smiles, and I can only urge you to listen to the broadcast, which is on Birtwistle’s 80th-birthday.