*Surtitles not working on first night 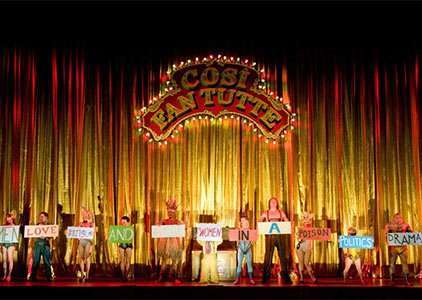 Take two couples, Fiordiligi and Guglielmo, Dorabella and Ferrando. The girls are sisters, and the chaps take their ladies’ fidelity for granted. Enter the scheming Don Alfonso, keen to prove the boys’ trust is mistaken and that all women are fickle. Well, here they are, vacationing on Coney Island. Not so unreasonable a location, for Lorenzo Da Ponte (1749-1838), a well-travelled and industrious Venetian, died in New York City, his final occupation being that of a bookshop proprietor. That wordsmith par excellence is now given the Jeremy Sams treatment; I particularly liked Don Alfonso’s “And on the way, I’ll recite you a sonnet. / If you’ve any sense, you’ll reflect upon it.” That gets a smile, and there are quite a few during this lavish ENO production of Così fan tutte.

However, there are problems, as early as the Overture, this first-night audience’s clapping and laughter drowning out portions of the music. As Judge Judy often says, some people came without their “listening ears”. The reason for the intrusions is Phelim McDermott’s decision to have us watch something while the introduction is being played out, specifically a troupe of fairground attractions (here an integral part of the Così show) arriving out of a box holding ‘idiot boards’ to give a précis of the opera. It’s quite clever in fact, a neat and witty encapsulation of what is to come, but not at the expense of Mozart’s music and this stylish rendition of it. But typically there is more for the eye than the ear in this staging. It’s good to look at, though, often a joy, well made, well coordinated, moving smartly when it needs to, with good costumes and with excellent time-of-day lighting. Rather noisy though – once you’ve heard the shutting of a chalet door you’ve also heard the many that follow; and the music again loses out, as it does with further inopportune clapping, whether into orchestral postludes and even those sublime arias that fade to nothing and are ideally reflected upon in silence. 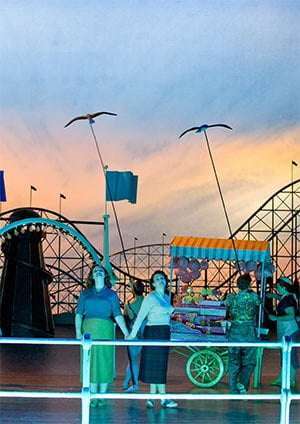 Nevertheless, Ryan Wigglesworth and the ENO Orchestra were truly excellent. Generally his tempos were spot-on and he was singer-friendly, and the players gave an account that impressed, whether the incisive strings, the virtuoso horns, the expressive oboe solos, or the seductive clarinet contributions. Much to relish from the pit, then, so too Wigglesworth’s lively renditions on the fortepiano that kept the recitatives on the move and very much integrated with the action.

As for the singing, this was variable (Randall Bills struggling somewhat), and none of the roles are getting their greatest outing. In some respects it’s the villains of the piece that steal the show, the playmaker Don Alfonso and the girls’ maid-with-nous, Despina, here a chambermaid in the Skyline Motel, her name monogrammed to her uniform. She is privy in knowing the boys’ deceit, masterminded by Don Alfonso, that their call-up papers were fakes and that they are returned in disguise to test their respective lovers’ loyalty. Disguise? No longer Albanians or hippies, Guglielmo and Ferrando looked just like their real selves and these girls aren’t stupid, if chalk and cheese siblings (well brought out here, although Kate Valentine’s and Christine Rice’s words were sometimes lost to the acoustic), so really we didn’t need the next couple of hours as the lads tried it on, with the lasses being tempted if with a conscience, for this was them, no sooner departing in what looked like Navy garb and then straight back on shore leave in civvies!

Whether McDermott had spent enough time with the singers to fully reveal their characters is a moot point, for in Act One there was little to engage with person-wise; maybe the play-it-for-laughs production distracted, although the soul-baring and life-changing aspects of Act Two (here in the Pleasure Garden) proved pretty spellbinding – Marcus Farnsworth especially compelling in Guglielmo’s anguished recriminations – with Mary Bevan’s energetic Despina (also a mad professor lookalike when the boys are feigning poisoning) and Roderick Williams’s understated Don Alfonso taking the vocal and acting honours, even if the latter cannot erase memories of Thomas Allen’s peerlessly cynical portrayal; maybe no-one can. The production can be a bit daft at times (and maybe Despina’s American-accent Act Two number can be dropped by the second night!), although the glitzy and ah-factor props do look cute, teacups as dodgem-cars, a fully working hot-air balloon, a couple of swans, and a trio of light bulb-encrusted heart shapes. All ends happily, Despina and Don Alfonso now a third couple. Love Never Dies.

So, mixed feelings, but it’s not at all Improbable that you’ll really enjoy this fresh and fun take on Così, as will New Yorkers when it reaches co-producers the Met. No matter that the surtitles machine failed to work on this occasion, it was just technology being unfaithful! A reminder that Thebans (Julian Anderson’s striking new opera) is also currently in ENO’s repertory, until 3 June, making for stimulating choices … or try both!