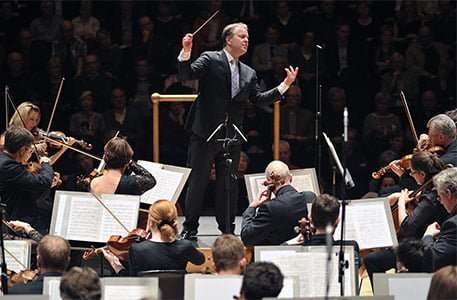 Although not his first concert as Chief Conductor of the BBC Symphony Orchestra (which was the First Night of this year’s Proms) this Barbican Hall appearance was Sakari Oramo’s first appearance with the BBCSO this season: a typically imaginative programme that took in familiar (and easy to take for granted) works from Mahler and Shostakovich alongside a new piece by Tristan Murail.

A commission from Murail (to whom the BBC had dedicated a Total Immersion day in 2009) is always of note, and Reflections/Reflets (2013) promises to be among his most ambitious conceptions yet – not least as the present two instalments are intended to inaugurate an orchestral cycle (one that will perhaps rival in scope the Solo cycle of his younger contemporary Pascal Dusapin). Of these initial two, ‘Spleen/Quand le ciel bas et lourd …’ takes its inspiration from Baudelaire’s poem ‘Spleen’ (from his collection Les fleurs du mal) – Murail embodying the text’s dark fatalism via music that unfolds in sombre yet translucent paragraphs of sound with an audibly French ambience and in which the spectral harmonic processes long associated with his music have opened-out into something that approaches modal tonality. ‘High Voltage/Haute tension’, by contrast, is a scherzo in the tradition of such pieces by Dukas and Stravinsky – its iridescent textures and extremes of register as mercurial as anything that Murail has yet done, and once again confidently realised by the BBCSO. 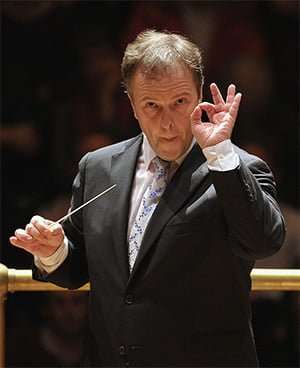 This latter piece provided a link – albeit a very oblique one – to the First Piano Concerto (1933) of Shostakovich. Hardly an unusual item in concert halls these days, this remains a treacherous work to bring off and one in which the dexterous coordination between soloist and conductor is of the essence. One of the most spontaneous as well as least inhibited of pianists, Olli Mustonen can sometimes be wilfully recalcitrant, so it was a pleasure to hear him and Oramo in such close accord – not least in an opening Allegro whose extremes of pensiveness and slapstick were ideally accommodated. The ensuing Lento was lucidly shaped, its eloquent culmination making way for a poetic recollection of the main theme in which Sergei Nakariakov (seated just to the left of Mustonen) evinced trumpet-playing of the most-tender pathos. The brief Moderato was limpidly rendered as transition to the final Allegro, a movement whose succession of stylistic ‘take-offs’ can easily lose impetus, but which was finely sustained through to a breath-taking account of the uproarious coda.

After the interval, Mahler’s First Symphony (1888) – a work with which Oramo has long been associated, having given it at the start of his tenure with the City of Birmingham Symphony some 15 years ago and later recorded it with the Royal Stockholm Philharmonic. Conceptually this account followed a similar trajectory, with the first movement gradually easing into life (offstage trumpets tellingly balanced) then its ‘wayfarer’ theme limpidly rendered, with the darker shades of its later stages made relative to the energetic abandon of its coda. The second-movement Ländler had impetus but also a lilting grace such as carried over to the trio with its easy yet never lazy elegance, while the succeeding funeral march was kept on a tight and expectant rein – the ‘Frère Jacques’ theme un-fussily played and Oramo not unduly emphasising the music’s Klezmer associations, while obtaining playing of easeful warmth in the hushed central section and drawing a fine irony from the closing pages. The finale is much the most discursive movement but, from its tempestuous opening, its ultimate goal was never in doubt. The ardently expressive second theme was suitably unhackneyed, and while the ‘‘paeans of victory’’ (David Matthews) were bracingly delivered if a little raw in intonation, Oramo rightly placed greatest emphasis on the intervening recollection of earlier ideas – so confirming the work’s ultimate yet hard-won cohesion and making possible its triumphant peroration.

A lucid and insightful performance, then, which was not without its rough edges yet gave ample notice of the ‘chemistry’ that brought conductor and orchestra together after just one concert (in October 2011, which included Bax’s Tintagel and music by Sibelius). Oramo joins the BBCSO for five more this season – and, with premieres and unfamiliar works in amongst established masterpieces, it promises to be an exciting one.