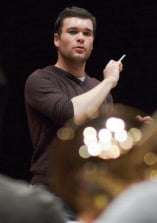 Ed Bennett was born in 1975 and was a finalist in the 2005 British Composer Awards. He directs the new music ensemble, decibel. Ausland was premiered by the BBC Philharmonic under James MacMillan in 2005 and won First Prize at the Tactus Composers’ Forum in Belgium. The composer’s programme note describes a monolithic form with a huge, slowly evolving stark texture and cites inspiration from Riley, Pollock and De Kooning. The work opens with soft strokes on vibraphone and suspended cymbal followed by shimmering high-string chords. The phrase repeats across the course of the work, gradually increasing in volume and texture and complexity. As the phrase begins for the sixth time, muted brass snarl and jab and the strings respond with an extra crescendo. Following the subsequent evolutions of the opening phrase, the brass become more insistent and dominating and the double basses set off on an independent stalking pizzicato line, with a solo violin weaving an intricate line high above. The music moved forward purposefully, developing increasing rhythmic complexity over the same basic pulse sustained by the high strings, the woodwind lines becoming almost frantic within the dense texture. At the end a sudden forte-piano left the strings’ chords suspended in isolation ending on the same distant cymbal and vibraphone chords. Ausland, lacking contrast in texture or rhythm, seemed longer than its 15-minute duration.

Ryan Wigglesworth, born in 1979, is an exceptionally talented musician and has worked as conductor and pianist with many distinguished groups and artists. Sternenfell expands and develops material used in a work for cello and ensemble written for Anssi Karttunen in 2007.

Sternenfell, lasting around nine minutes and in four linked sections, opens with buzzing activity, a little like John Adams’s music and moves through a series of fragmentary episodes often sharply contrasted, a solo cello melody no doubt recalls the work’s origins, followed by an expressive chordal melody for horns. The third section opens with sustained low pedal notes for double basses and the coda evolves an extended melodic line for violas and second violins winding down to an inconclusive ending.

Then came the two song cycles. 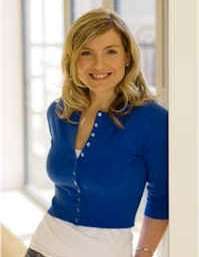 Jonathan Cole was born in 1970 and since being awarded the Royal Philharmonic Society Composition prize in 1999 has built a close relationship with the London Sinfonietta and his music has ben played internationally. “Sorful Ter” sets two anonymous medieval poems that imagining the Virgin Mary reflecting on Jesus. The first laments the poverty surrounding the child; the second expresses grief over the crucified Christ. The voice remains almost entirely unsupported, the angular piano-writing interspersing in a slow, reflective line, absorbed and introspective. The second section is more overt, the piano now rippling and sinuous, but still disconnected from the vocal line, as if commentating at one remove on the emotions expressed. The vocal-writing is now more fluid, reaching an anguished peak of expressive intensity.

Kenneth Hesketh will be 40 this year. He completed his first commission for the Royal Liverpool Philharmonic and Sir Charles Groves at the age 19 and is now the RLPO’s “Composer in the House”.

“Shimmerwords and Idle Songs”, dating from 2007 sets Chinese poetry, mostly Po Chu-i with one verse of Zhi Qingyu. The poems discuss travel, the joys of nature, commentaries on imperial society and musings on the transience of life. The composer notes that Shimmerwords is a cluster of stars in Ursa Major, but also a celestial incarnation of the literary arts and that ‘idleness’ is a concept central to Taoism, where it is a meditative state of being at one with everyday life.

The piano- and vocal-writing is alert and intricate, matching the crystallised beauty of the Chinese verses; slow and exquisite, sometimes angular phrases, activity and wonder, the piano-part glistening with exuberant effects. Dexterity from singer and pianist is required. The collection ends with a long piano solo of reserved sparseness. For all the considerable delicacy there was nothing in the jewelled texture for the ear to latch on to.

Throughout Claire Booth was exemplary: clear and musical, engaged and committed, Ryan Wigglesworth a sensitive pianist.

John Woolrich’s music is widely played and recorded. He is unclassifiable as a composer and cherishes his status as a musical outsider who cultivates a critical mind.

The string numbers were reduced to about half the size of ‘normal’. At first piano and strings went their own way, the orchestra line angular and rhythmic, the piano alternating at a slower pace, while the trumpet unfolded a solitary line, somewhat Ivesian. Nocturnal string glissandos contrasted with a bold pizzicato line from the double basses. The composer referred only to dialogue between soloists and orchestra, though this seemed like a four-way conversation: piano, trumpet, strings and the independent double basses acting quite independently. The conversion was often heard in short snatches, rather like being at a party and hearing voices floating across the room If ‘capriccio’ is understood as being fast and brilliant, then this work is mistitled. It is more reflective and disjointed, developing at the end into a grim march giving way to bolder gestures before the music slowly retreats to an oddly inconclusive final gesture.

Oliver Knussen, the best-known of the composers represented, is recognised as a tireless champion of new music. His solution to the continuing problem of being apparently unable to finish any new work is to recycle earlier ones. The opera “Where the Wild Things Are” was completed in 1983 and is based on the story by Maurice Sendak, who wrote the libretto. Max, a small boy dressed in a white wolf suit, misbehaves and is sent to bed without supper. In the night his room opens onto the forest and the ocean and he is transported to the island where the Wild Things are, He is subsequently crowned king but becomes homesick. On reaching his bedroom, the forest and ocean vanish, his still-hot supper waiting for him.

The opera includes some of Knussen’s most unbuttoned and celebratory music, written, as he notes, in homage to Mussorgsky and Debussy. This song-cycle takes Max’s three arias and creates a character-portrait of the boy, opening with the overture and separated by two short transformation episodes and the ‘Sea Interlude’, around 17 minutes in all.

Claire Booth, one of Knussen’s favourite interpreters, was at once excited, self-centered and finally reflective as the naughty and eventually contrite boy. Wigglesworth conducted with clear, restrained and unfussy gestures, drawing precise and effective performances from the BBC Symphony Orchestra throughout the evening.