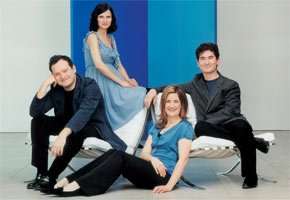 The Belcea Quartet was ‘in residence’ at the Wigmore Hall from 2001 to 2006 and signed for EMI. No-one could accuse the players of lightweight programming – both these works being huge in terms of duration and content.

The first of Beethoven’s ‘late period’ string quartets was launched with upward slides and a slight lack of weight. The allegro proper had tension and a sense of power in reserve and the second subject was seraphic. Unfortunately the cellist’s intonation was initially somewhat wayward, In the development there was a real conversation to be heard between the instruments, the players not being afraid to emphasise the diverging melodic lines within each bar. This conversational quality was allied to almost-savage attack, with biting sforzandos and extreme dynamic contrasts. Ensemble was not perfect, but because the musicians were more concerned with emotional impact than beauty of sound, you could be forgiven for thinking it was worse than it actually was.

There is a tendency today for the members of string quartets to misunderstand, and thereby devalue, ‘late’ Beethoven, by playing the great slow movements too quickly. Thankfully the Belcea musicians took the first subject very slowly and very quietly. This rapt sense of concentration and timelessness was maintained throughout the movement’s sublime length. In an ideal world there would have been more depth to the tone and an even greater sense of spirituality. Yet, at the end, the audience emitted a few subdued coughs, afraid to disturb the profound sense of tranquillity in the Hall. In the scherzo the refined opening gave way to savage attack, extreme dynamic variation and, as in the first movement, the inner balancing of parts was bold and eschewed tonal beauty. There was no sense of the hurry in the finale. The volume in the first subject’s second half suddenly dropped to mezzo-forte and the line seethed with energy, while the second was sprung, urgent and martial. However the concluding pages’ search for the home-key was marginally under-powered and ensemble precarious.

At the start of the Schubert, the Belcea Quartet once again exploited an extreme dynamic range. But here two chinks in the players’ armoury became apparent. They can produce myriad dynamic variations, however a true fffis not, at this stage, in evidence and throughout the Schubert their use of ppp effects became slightly predictable. Nonetheless the first theme was full of old-fashioned pushes and pulls, the rhythmic impulse rocked back and forth and the composer’s sublime key changes were explored in an almost improvisatory fashion. The first-movement repeat was observed.

‘Authentic’ performance aficionados would have had a heart attack at the start of the Adagio. There was loads of vibrato and slides, the phrasing was plaintive and the cello ‘sang’ the main theme. Each section of the movement was vividly characterised and, as in the Beethoven, the codetta brought a sense of reflective peace. This mood was maintained at the start of the scherzo, where very soft, elfin phrasing gave way to a gorgeously spun, slow account of the trio. Despite this refinement and subtlety, the use of ppp was extreme and became precious.

There were few problems in the finale. Its first theme was insinuating, the second deliciously sprung; every bar was alive and there was some startling attack. A tremendous evening.