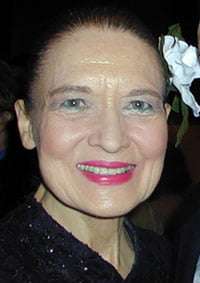 In October this year singer-actress and cabaret-performer Julie Wilson will be 84 years young. Last year Barbara Cook, Eartha Kitt, Cleo Laine and Elaine Stritch all celebrated their 80th-birthdays. Last week Chita Rivera, who has just turned a mere 75, kicked up her famous legs at the Shaw Theatre. It seems that divas never die and neither do they fade away. Ask Julie Wilson if she is going to retire and she will say, “No, I’m not dead yet”. And that happens to be the title of one of the two songs in her opening medley at the Jermyn Street Theatre. It’s actually the work of Eric Idle and John Du Prez for Monty Python’s “Spamalot”. The other song is ‘I’m gonna live ‘til I die’, which may be a too obvious remark to make, as we’re all the same boat with that one.

That said, most people do reach an age when they want to or have to retire. Julie has been singing for over six decades and just wants to go on. She toured as a band singer in the 1940s, progressing later to the chorus of Broadway shows and then eventually hit the big time in leading roles and a legendary cabaret act. She stopped her career in the 1970s to bring up her family when she joined her two sons in Omaha and stayed here until they were in their teens. In 1983 she went back on the road.

In the 1950s, London saw her in “Kiss Me, Kate” and she stayed here for “Bet your life” with Arthur Askey, and she took over from Mary Martin in “South Pacific”, and appeared in “Bells are ringing” while also studying at RADA. On Broadway she was also in “The Pajama Game”, “Kismet”, “Jimmy”, “Park”, and “Legs Diamond” and she toured in “Show Boat”, “Panama Hattie”, “Silk stockings”, “Follies”, “Company” and “A Little Night Music”. In the mid-1980s she sang Cole Porter songs in a nightclub, since when her cabaret act was born.

From the classic American Songbook material Julie peppers her act with all kinds of songs from Jerome Kern (‘Bill’ from “Show Boat” and ‘Once in a blue moon’ from “The Stepping Stones”), Rodgers & Hart (‘Blue moon’, ’You took advantage of me’, ‘What is a man?’ and ‘Bewitched, bothered and bewildered’), Johnny Mercer (‘Too marvellous for words’ and ‘Dream’), Cy Coleman and Carolyn Leigh (‘Hey, look me over’) and Cole Porter (‘Let’s do it’ and ‘The laziest gal in town’), to name a few. But there are also the newer writers such as Peter Allen who wrote a part for Julie in “Legs Diamond”. She sings his ‘Everything old is new again’ which is a kind of signature philosophy for Julie Wilson, and she gives the number the full works. When she does the highly sexy ‘The laziest gal in town’ – Dietrich’s Cole Porter song from the Hitchcock film “Stagefright” – she admits that “it’s not that she wouldn’t, and it’s not that she shouldn’t and God knows it’s not that she couldn’t, it’s simply because she’s the laziest gal in town.” Even as an octogenarian (who had a stroke two years ago) she can put across this most blatant of sexy numbers without any kind of shame.

The success of Julie Wilson’s art is that she knows exactly how to work an audience. It’s no accident that it is called a cabaret-act for this is acting of the highest order and cabaret is now a dying art. However, the American Songbook in London season also includes younger performers (Simon Green, Helen Hobson, Alison Jiear and Jessica Martin) who have mastered this most difficult of arts. If anybody needs a workshop, just book a seat to see Julie Wilson.

As well as all of the above Julie also sings duets with season-host Jeff Harnar plus some Kurt Weill (‘Mack the knife’ and ‘Surabaya Johnny’) and a perfectly riotous number called ‘If he were straight and I were young’ by Francesca Blumenthal (she wrote “Lies of Handsome Men’) and jazz-pianist and songwriter Ronny Whyte. In Julie Wilson they have a sublime interpreter. The lady has warmth and passion for her material, which she interprets with subtle timing, phrasing and the total joy of communicating with her audience. To this end she is aided by the excellent pianist, arranger and musical director, Christopher Denny. Don’t miss!