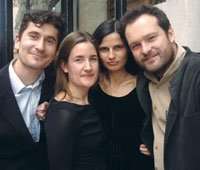 A generous lunchtime pairing from the Belcea Quartet confirmed the quartet’s popularity, with standing room only at the Wigmore Hall. The pairing of Haydn and Dvořák brought mixed results, but confirmed the ensemble as one of impressive cumulative drive and musicality.

Haydn’s Opus 77 pairing of string quartets are a clear anticipation of Beethoven, both in their lengthening of form and a conscious move from the minuet towards the scherzo. The Belcea were at pains to draw on this progression, but too often exaggerated the dynamic extremes, or thrust forward so that the music occasionally bordered on the savage.

On paper the springy first movement may be Allegro moderato, but in this performance it was most definitely an Allegro that danced with great poise, marching purposefully forward. Unfortunately the presto Menuetto, brilliantly played though it was, cast any of this charm aside, with Corina Belcea-Fischer’s drive forward in the trio much too aggressive.

The finale, too, lost a little appeal in its forcefulness, despite once again impressing in ensemble and communication. Thanks to the composer, Belcea-Fischer enjoyed an elevated role in three of the four movements and was bold but beautiful of tone in the Adagio, her accompanists showing here a dynamic restraint not found elsewhere.

Dvořák’s penultimate quartet in terms of opus number – although the last to be completed chronologically – received a superb performance. Often this quartet has proved troublesome on record, let alone in the concert hall, as many a big-name ensemble has suffered at the hands of its demands on tuning.

The Belcea were precise at all times, the musicians’ treatment of Dvořák’s busy melodic counterpoint so good that every melody and response could be easily traced.

The introductory passages to the outer movements were ideally poised – the first a real passing from darkness to light, the last notable for its furtive cello lines from Antoine Lederlin, resolved as the other instruments joined him.

The Furiant scherzo was a wonderful contrast of cross-rhythms, legato in approach but losing nothing of Dvořák’s rhythmic vitality, while the songful trio was beautifully phrased, the return to the scherzo carefully executed.

Even greater insights were to be found in the slow movement, in particular its surprisingly morose central section, struggling for resolution but finding it finally in a serene chord. Contrasting with that were the finale’s taut closing pages, attacked with gusto by the Belcea as the musicians emphasised Dvořák’s rich harmonic writing, conveying also the sense of a battle well won.