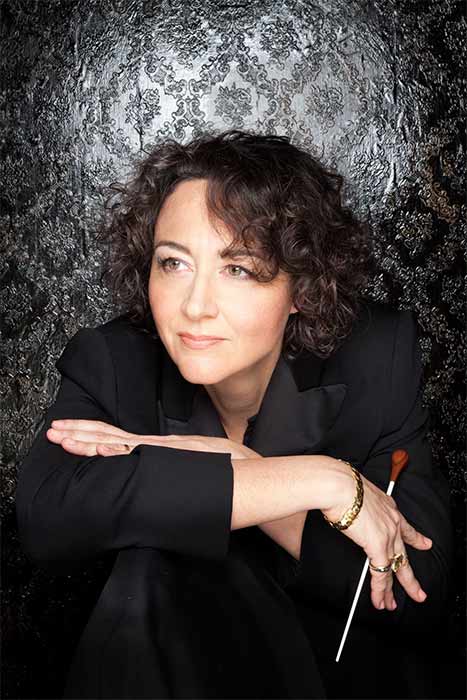 Almost a century separates these two works, Mozart’s uncompleted Requiem from 1791 and Richard Strauss’s Death and Transfiguration composed in 1889; both address the afterlife. Their partnership here – planned years ago – acquired an added relevance in being dedicated, in a quietly stated but nonetheless heartfelt way by Nathalie Stutzmann from the podium, to the victims of and people affected by the incident at Westminster on Wednesday the 22nd; the London Philharmonic’s concert that night at the Royal Festival Hall was cancelled.

This was Stutzmann’s conducting debut with the LPO and it was clear by the way she kept the layers of the Strauss light and distinct that she knows exactly what she wants. This was music-making that inhabited the score from within, eschewing heavy brushstrokes. In what was as fascinating as cohesive a reading, Stutzmann carefully graded the climaxes to bring the work, full-circle, to its quiet close.

Oddly, the stage looked fuller for Mozart’s Requiem, as the first two rows of the London Philharmonic Choir had moved down onto the platform, and the LPO had knitted itself even closer, joined by a red-panelled chamber organ. Trumpets and trombones were on either side of the vocal soloists, themselves just behind the basset horns and bassoons. There was an aural benefit to the deployment; I was met with an imposing wall of voices and a tightly focused dark-hued orchestral sound.

Stutzmann performed the first completion by Franz Xaver Süssmayr although for some its familiarity was tempered by Stutzmann’s idiosyncrasies. With numerous subsequent completions I was happy to greet Süssmayr as an old friend, spruced up in this involving performance that found drama in both Mozart’s and Süssmayr’s contributions and left me feeling that the final movements attributed to Süssmayr – the ‘Sanctus’, ‘Benedictus’ and ‘Agnus Dei’ (before he reverts to Mozart’s opening ‘Lux aeterna’) – act as a necessary corollary to Mozart’s innovations.

There was an indelible impression of Stutzmann generating a single collective will, with the Choir relishing a singer being in charge and an aptly matched quartet of soloists. This Requiem – as much for the living as for the dead – flowed powerfully, from the mournful bassoon and basset horn keening at the outset, through the thrillingly articulated semiquavers of the ‘Kyrie’ and the outstanding trombone and baritone duet of Tuba mirum (David Whitehouse and Leon Košavić respectively) and so on. The Choir sang magnificently, with a thrilling ping to the tenors’ entries, while their collective standing and seating was impeccably negotiated. In short this was an account for which every facet had been thought through.

Amongst the soloists, the impossibly young-looking Košavić was matched by Robin Tritschler’s ardent tenor and Sara Mingardo’s resonant contralto. Kateryna Kasper’s soprano could arguably have been more full-bodied but her contribution fitted the dramatic way of Stutzmann’s approach.

An almost capacity audience greeted the performance with almost audacious enthusiasm (is whistling a suitable way to acclaim a Requiem, I wondered?) and there was no doubt as to the buzz that was engendered. I hope that Nathalie Stutzmann was signed up immediately for return visits to the London Philharmonic – hopefully with the Choir as well.