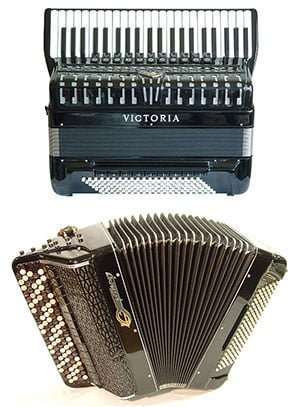 The chance of hearing an accordion orchestra in one of the capital’s concert venues is not such a frequent event that one can airily pass it by, but the occasion of listening to two – one from London, one from Germany – proved too intriguing an opportunity to miss. I’m glad I took it. Each ensemble was conducted by a musician who is also a composer, and it was additionally fascinating to hear new works from both men, the British group paying a nice compliment to their colleagues from Nuremberg by playing a work by the German Adolf Götz (born 1938), returned by the visitors who included Elgar and Holst.

The concert’s first half was given by the Morley Accordion Orchestra (based, as one might have guessed, at Morley College, but soon to change its name – on July 4 – to the London Accordion Orchestra). It began with a premiere. Flight, composed earlier this year, was suggested “by the local, and very vocal, bird song” of North Norfolk: it begins pianissimo, with flaky percussion touches, and gradually the material comes together through the myriad sound of massed accordions, equally quiet and then flowering into almost visual portrayals by way of scalic passages and fascinating harmonic underpinning. This is clearly a work of no little musical imagination, and one could well believe that the performance did the score justice.

Jason Carr’s ‘Rome’ is clearly a night-time, or perhaps early-evening, picture almost entirely based upon jazz sequences, to the point where one wondered about the other movements of the Suite from which it comes: the composer’s note claims his travelogue of the city was via a Vespa scooter, but this was not so much a 1960s-Mod piece as perhaps akin more to that of a slightly older visitor observing the rush-hour and the virtual impossibility of going from A to B in a straight line in Rome at 5 p.m. – the phrases beguiling us the while from strategically-placed radios.

Adolf Götz is known in his native Germany as a composer of music for the accordion, and his (three chosen) Dalmatinian Dances seemed to ‘fit’ the ensemble as to the manner born: they are immensely attractive pieces of genuine light music, extremely well written and were brilliantly played. Then Jason Carr himself appeared to give a scintillating account of the truly immortal Rhapsody in Blue, though the transcriber of the orchestral part for accordions was not named. No matter – this was indeed a splendid performance, full of genuine life and musical insight: a real treat – though the work dates from 1924, not 1923 as the programme stated. 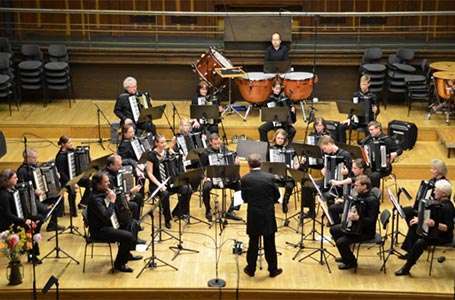 The German visitors began their half of the programme with equally brilliant transcriptions of two movements from Holst’s The Planets: perhaps ‘Mars’ really does need the oomph of a big brass section against the insistent timpani and percussion, but ‘Jupiter’ came off extremely well – indeed, both movements benefited from excellent tempos adopted by Stefan Hippe. The playing of Nürnberger Akkordeonorchester was first-class, as we heard in Hippe’s own recent (2012) memorial piece, Adagio, a serious and extended (12 minutes) study in slow motion, leavened by a series of varied crescendos until a powerful, yet consolatory, C major chord signals the arrival of the concluding gesture.

A dazzling arrangement of Liszt’s Grand galop chromatique enabled the Nurembergers to display their virtuosity once more, this enjoyable romp being followed by a piece which has dogged your correspondent for many years without having heard it as Purcell probably intended. His Fantasia Upon One Note first entered my life through an HMV ‘plum label’ 12-inch 78rpm disc, when it was played by the Zorian Quartet with Benjamin Britten on second viola (i.e., the ‘one note’); many years later I heard it in South Kensington, played by an ensemble with David Mellor playing the second viola part (dead in tune, I might add); and now an accordion orchestra: perhaps someone can direct me to the original! But this account was fascinating for its musical, rather than its timbral, qualities: once again, Hippe’s tempo was spot-on, and the music came across as a fascinating study, not so much as sound per se as musical expression.

Finally, chunks of Enigma Variations (the Nuremberg band clearly possesses the complete score in transcription, to judge by the page turning between numbers) – a pity there was not time for the entire work, for this was a very musical and exceptionally well-prepared account. Indeed, ‘Nimrod’ – the day after the 70th-Anniversary D-Day commemorations – made a very profound impression in this version (it is, of course, a musical portrait of an Anglicised German-born musician, A. J. Jaeger), Elgar’s concluding self-portrait (XIV) was brilliantly accomplished. A standing ovation for the Germans brought an encore – Monty Norman’s ‘The James Bond Theme’ – to send the large audience home delighted.