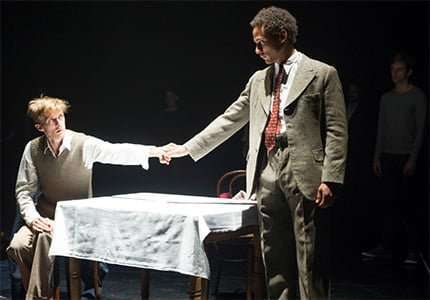 This Neil Bartlett-curated staging of Benjamin Britten’s tenuously-connected Canticles (five extended songs, each the equivalent of a literary novella – longer than a short story but too brief to count as a novel) reaches London by way of Brighton and Snape. The resulting compendium of visual realisations, now nicely run-in, is vivid and for the most part well-judged, with some potent imagery along the way.

Prima la musica, though, and no praise can be too high for the six musicians. Led by Julius Drake (a pianist needed in four of the pieces) and Ian Bostridge (a tenor, originally Peter Pears, required in all five) the Canticles came shatteringly alive. As in their Virgin Classics recording, Drake and Bostridge have an unashamedly dramatic view of the music – an approach that not only abetted the theatrical interpretation but also helped a disparate group of pieces gel into something plausibly akin to a cycle. Bostridge was at his most eloquently communicative and lyrical throughout – as fine as I’ve heard him in Britten – while every key-stroke by Drake, Bostridge’s regular piano partner, had rightness and power.

Iestyn Davies, one of the most intelligent countertenors working today and a frequent performer of Canticles II and IV, sang an ideally characterised account of Isaac in the Chester Miracle Play setting. He and Bostridge were joined by Benedict Nelson – rich and warm of tone – in The Journey of the Magi, the first of two T. S. Eliot settings that drew the composer back to his Canticle form towards the end of his life after a seventeen-year gap. 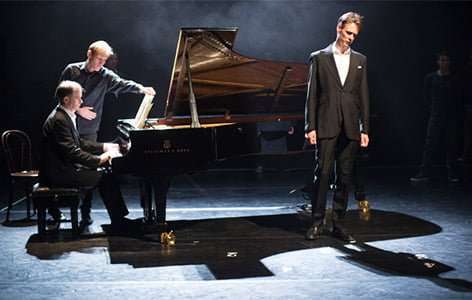 As raw material for a stage spectacle, Canticles II and V have the most going for them. The later of the two – Britten’s second Eliot setting, The Death of Saint Narcissus, composed two years before the composer’s death as he recuperated from an ultimately unsuccessful heart operation – could have been made for dancing, as both text and accompaniment (how rapturously Sally Pryce played the harp part!) cry out for physical interpretation. In the event, Wendy Houstoun’s choreography of Dan Watson’s solo performance was viscerally thrilling. In particular the use of a wall-shadow to evoke the narcissistic tendency of the “dancer to God” will have been very effective for most in the audience, although not for anyone seated on the stage left side of the upper and middle gallery since Houstoun’s unfortunate blocking means they will have missed it entirely.

The other unquestioned highlight was Scott Graham’s tactile choreography of Abraham and Isaac, which attempted nothing more than a joyous depiction of a loving father-son relationship. The decision not to act out every turn of the familiar Bible story provided an unexpectedly moving solution to the scenic challenge. Less an illustration than an impression, and replete with the intertwining shimmies, swivels and swirls that are the hallmark of Frantic Assembly, it was perfectly judged in its simplicity.

Lighting guru Paule Constable achieved much through very little with her static staging of Canticle IV, dressing the three singers in greatcoats and giving each an emblematic suitcase. Bartlett himself somewhat over-directed Canticle I, My Beloved Is Mine, which he divested of Francis Quarles’s devotional mysticism and presented quite reasonably as a worldly paean to the joys of a loving relationship (played out with tenderness and warmth by Edward Evans and Peter Bray).

The only real disappointment was John Keane’s uninspiring and literal use of grainy film, projected onto the bare wall and floor, to illustrate the extraordinary Canticle III. With its rain of aircraft bombs and images of the Crucifixion, it was less a meditation on Edith Sitwell’s harrowing text than a handy glossary in pictures of what she had in mind when she wrote it. The result was certainly absorbing, not least thanks to the expressive horn-playing of Richard Watkins, but an absence of creativity made it less rewarding than the other contributions to this magic hour of major Britten.