Always one of the highlights of my operatic year, Blackheath Halls Community Opera (now in its seventh season) offers its bicentenary tribute to Giuseppe Verdi in this visceral production of Macbeth, typified by extraordinary diction from the 70-strong Chorus, some fine instrumental solos (particularly woodwinds) and some memorable stage tableau, with strong use of the stage – and red curtain. 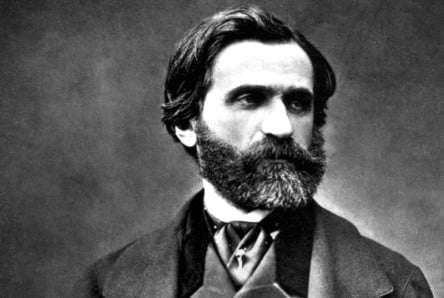 Red is the key – after all, it is a bloody tale, Macbeth, as the blood-stained fingerprints that colour every page of the programme testify, let alone the blood-spattered clothes and skin of murdered (spoiler alert!) King Duncan and Banquo. Rather more simply set than Eugene Onegin (2011) and Cendrillon (2012), a black swathe cuts the Hall in half, with audience on either side. At the centre there is a raised circular dais and up to the stage is a set of steps. The curtains in the first half remain closed – rarely has red velvet seemed so ominous. At the other end of the Hall is the Orchestra, backs to the action, with timpani and percussion separate, in the corner between the public and performers’ entrances.

Much of the solo singers’ direction is linear along the traverse stage, albeit not without some awkward balances, not so much in volume, but in words being lost – especially when Miriam Murphy’s Lady Macbeth or Quentin Hayes’s mercurial Macbeth turn towards the curtain and away from both sides of the audience. The Chorus fared better: given the audience’s proximity it was possible to hear clearly nearly every word, with some satisfying surround-sound effects. More than in the two previous productions, the Chorus is richly entwined through the whole score, with not so much three witches but three-score of witches, in their white nighties and unkempt black hair, entering from three different places and swirling around the centre. And spare a thought for the production crew who helped mastermind the quick changes, the chorus-members swapping from ball-gowns to soldiers’ uniforms or peasant garb as quick as the “brinded cat” has “thrice mewed” (Act Four/scene 1) – and back again. 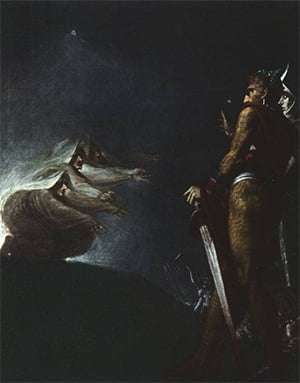 This production is a triumph. Costume-wise we are in black battle-dress for the men and modern-dress suits, with Hayes, when King, donning a military, braded jacket and Murphy in stylishly flowing silky, but functional, designs. It is Murphy – in a premonition of the sleepwalking scene – that we see first, picking up the object on the dais, an effigy of a child, which later the witches brandish (and stir into their magical brew). By the second half, the stage’s curtains have been replaced by tatters, through which Macbeth’s vision of Banquo’s future line of kings is seen, and – indeed – the entry of bloodied, murdered Banquo himself (as imposing silent as in his earlier utterances) in the ‘ball scene’ where Macbeth stumbles into madness. The pupils from two schools (who do two performances, with another two schools doing the other two) offer suitably ghostly support.

Under the expert Nicholas Jenkins (seriously ill during rehearsals in early June), things are very good, too – strings of the Orchestra valiantly trying to keep in pitch in the extreme heat. But Jenkins has the flow of Verdi’s music and can communicate that across the hall (with the aid of a couple of TV screens). Coherent and propulsive, Verdi’s expert distillation of Shakespeare’s tragedy comes across with full force.

Quentin Hayes as Macbeth offers high-voltage action coupled with an ear-pleasing, soft-grained baritone investing Jeremy Sams’s translation with conviction and meaning, while Murphy impressed with power and in pitch, and was particularly fine in her final scene as she had somnambulantly attempted to wash blood from her hands. Matthew Rose was a thrilling Banquo, while Charne Rochford’s Macduff was suitably anguished at news of the death of his wife and children. From Trinity Laban, Thomas Drew as Malcolm, Susanna Buckle as the Lady-in-Waiting and Simon Dyer as the Doctor offered able support, with Dyer and Tony Brewer (in the silent role of King Duncan) having also been in Cendrillon last year.

Christopher Rolls’s production has the benefit of a simple clarity and its real glory is the Chorus, which is where the community aspect is most visible, and it remains Blackheath’s triumph, best displayed in the lament of the Scottish refugees at the start of Act Four. If more people could see how much opera matters to Blackheath, claims that it is ‘elitist’ would be silenced.