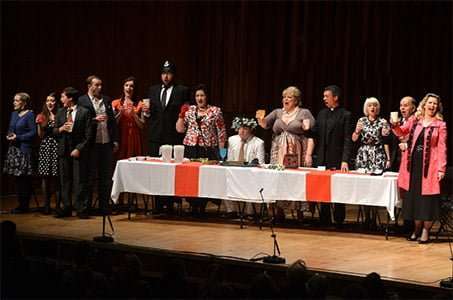 There is a feeling in some quarters that Benjamin Britten’s centenary this year has given him – I quote – “a disproportionate hold on the musical establishment” in relation to other notable British composers. Search a bit further for comment on his opera Albert Herring to find it dismissed as “provincial, coy and embarrassing.” It’s certainly a twee oddity in Britten’s oeuvre in that it is typically written with brilliance, genius even, yet it is strangely anonymous and character-less, and its returns diminish the longer it goes on. In the interests of fairness, Sviatoslav Richter thought Albert Herring “the greatest comic opera of the century.” Let me also say at this juncture that this particular BBC performance was superb, both in musicianship and staging.

Albert Herring was premiered on 20 June 1947 at Glyndebourne (when Peter Pears took the adolescent title-role he would have been two days short of his 37th birthday, and even older in the 1964 Decca recording!), the composer conducting, presumably from a piano (he was a master on the instrument). Otherwise the economical scoring is similar to his previous stage-work, The Rape of Lucretia, unveiled the year before also in East Sussex. Herring is the antithesis to the “serious” Lucretia, the latter so compelling even without a staging (the acid test), and which Albert Herring cannot match. It seems that Britten wished to accomplish two targets with Herring – the writing of a lighthearted opus and he also wanted to set “everyday language” (not that Eric Crozier’s rhyming couplets are).

Even if not armed with these facts, it is often difficult to discern an individual composer at work here; a virtuoso and sophisticated one, yes, and someone who knew his Stravinsky and Schoenberg, while sharing musical ribaldry with Malcolm Arnold, but the characters seem no more than ciphers, the story is slender and doesn’t sustain some 135 minutes of music. Although the ear admires the dazzling use of a few instruments, the invention itself lacks distinctiveness if not illustration and parody. 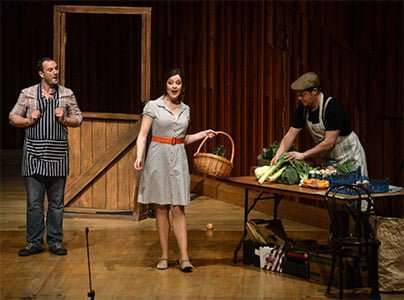 The synopsis is focussed on the Suffolk town of Loxford (imagined) where the loose morals of the girls make them unworthy of being a candidate to be crowned May Queen. The committee, led by the autocratic Lady Billows and including the Vicar and the Mayor, decides on a May King instead. Albert Herring, an innocent and under the thumb of his mother, is the chosen one. At the ceremony (Act Two) his lemonade is spiked by Sid, and a very drunk Albert disappears – and finds life in the process – and is believed dead. When he returns, mourning is suspended and he is scolded and interrogated by all, save his contemporaries Sid and Nancy; Albert’s stock has risen with them.

The opera itself starts off well. Lady Billows is being very demanding of her housekeeper, Florence Pike. Soon the dignitaries arrive and indulge in small talk. As each recommends a girl for May Queen, so Florence has her notebook out to dismiss them all – she, as busybody, has been more of a detective than Superintendent Budd. Lady Billows is incredulous until the May King idea is suggested and Albert nominated. He meanwhile is serving in his mother’s greengrocery and being tormented by the cocky and daring Sid (it is he that adds booze to Albert’s lemonade).

The setting-up of the story is the best part of the opera, and musically some pre-echoes of Peter Grimes (Britten’s previous stage-work but one) can be heard with interest. One can understand with such heavy-duty subjects (Grimes and Lucretia) why the relief of Herring would have appealed to Britten. Leaving aside doubts about the piece, this performance was of the highest distinction. With the twelve BBC Symphony Orchestra members (their colleagues had been in Aldeburgh the night before for a Britten concert under Oliver Knussen) centre- and middle-stage, and playing marvellously, there was room for props and movement, all tolerably well directed by Kenneth Richardson – well lit, too – and conducted with authority and perception by Steuart Bedford (a first-rate pianist, too), who worked with Britten, not least conducting the premiere performances and recording of Death in Venice (1973). In comparison with that opera, and Grimes, Billy Budd and Owen Wingrave, then Albert Herring is more of a red herring in Britten’s output.

None of this negativity can be blamed on this BBC presentation. The BBCSO instrumentalists’ contributions were outstanding, the props and movement were well-judged, and the vividness of the singing kept the attention. Christine Brewer was the irascible and haughty Lady Billows, Roderick Williams was vocally saintly as the Vicar, Andrew Staples deft as the soon-to-be-enlightened Albert, with Kitty Whately quite outstanding as Sid’s girlfriend the sweet-natured Nancy, who is poignantly remorseful when Albert is thought deceased. But they were all splendid, and I wouldn’t want to argue with a single tempo or phrase that emerged from Steuart Bedford’s discreet and insightful leadership.