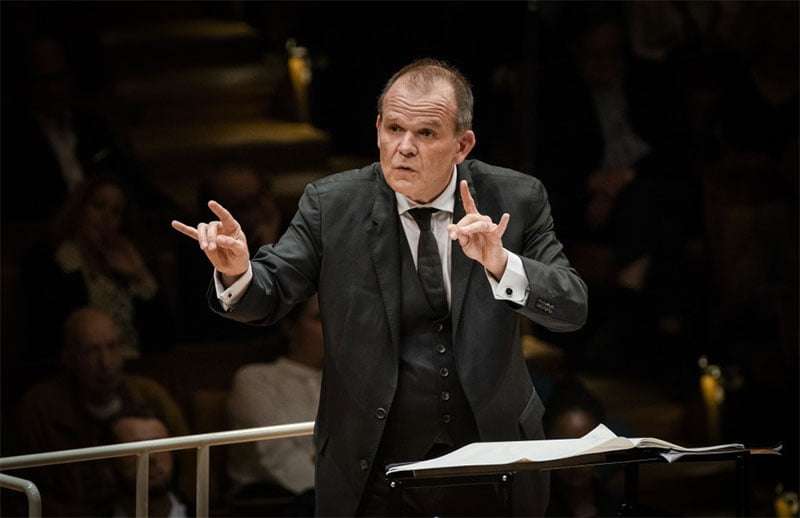 François-Xavier Roth is not the first conductor to intersperse Debussy’s three orchestral Images with other composers’ music, but maybe two of Ligeti’s rarefied soundscapes were making their debuts in such a context.

First though Stravinsky, his 1920/1947 in memoriam piece for Debussy (dead 1918), immaculately played by the required Berliners, incisively interjectory and marmoreal lyrical – calls and responses – a flickering between states yet unified by ‘sounding together’ and a sense of ritual, solemnity winning through.

The Violin Concerto (1950) by Bernd Alois Zimmermann (born 1918) opens with a flourish of energy to launch ‘Sonata’, the writing for violin and for the large orchestra (including piano, harp and celesta) kaleidoscopic and intense, an emotional fireball interrupted by capricious dance measures and leading to a glowering final chord. References to Bartók abound. The ensuing ‘Fantasia’ is aptly named, never the same twice, and the closing ‘Rondo’ is headstrong and pungently rhythmic, fuelled by dark-toned drums and other vivid colours; Khachaturian came to mind. Carolin Widmann poured flawless technique and huge commitment into a revealing traversal, backed to the hilt by orchestra and conductor.

It was a short first half, the Zimmermann is barely twenty minutes. The much-longer, unbroken, sequence of Debussy and Ligeti (“a son of Debussy”, Roth) worked a treat – good idea FXR – the mists and mysteries of ‘Gigues’, from which emerge melodies of English origin, found intricate details precisely pointed by the conductor’s baton-less hands, and sensitively intermingled by the players, the music diminishing naturally into the slow, static and ethereal textures of Lontano, high frequencies and low tones, otherworldly yet of eerie suspense, not so much distant as at-times dramatic, music that creeps hypnotically into one’s consciousness, to which the shifts and shades of Debussy’s welcome to springtime were of earthly pleasures, a mix of paradise and perkiness.

Atmosphères (used by Kubrick in 2001) is as preoccupied as Lontano with timbre and texture, there are though more swells, and details buzz like insects swarming, dynamics are extreme, so too the instrumental palette (it’s not often the strings inside a piano are brushed for sound), fading to nothing … then we were hit by the Spanish sun heating and dry-dusting highways and byways, to be corresponded at the close by a festival day following nocturnal mysteries and beauties. Roth led an unhurried and affectionate account of the outer sections, refinement abounded (trombone glissandos not overdone, for example) and, in the central tableau, there was much fragrance in the air, the senses ravished. Throughout, the ear was impressed by the performances.