Having just given several staged presentations, directed by Robert Wilson, at the Easter Festival in Baden-Baden, the Philharmoniker musicians returned home to Berlin, cast and conductor intact, for a concert performance of Verdi’s Otello, one of the truly great operas.

With a flash of trumpet lightning and a thunderous fortissimo, Zubin Mehta (partly conducting from memory, opening his score from Act Two, previous tenors as Otello for him have included Jon Vickers and Plácido Domingo, and Tito Gobbi as Iago) launched a spectacular storm and then Arsen Soghomonyan made an exalted entrance as The Moor of Venice…

This was a terrific performance vividly presenting the waves and winds of the opening, awesome choral singing, with meticulous attention to rhythm and detail in the orchestra, as throughout, but the harmonious love between Otello and Desdemona will become soured and end tragically – fuelled by Iago’s evil scheming.

What was notable here was that the scene-setting and character introductions and interactions were just as compelling as the drama that unfolds from them; and, however formally dressed, the singers (entering and exiting as required) were totally inside their roles, and, of course, Verdi’s music tells all.

What a lovely cello solo to introduce the heavenly Act One love-duet between Otello and Desdemona, how sensitive the starlit solo strings as they sang, and what a honeyed and unstinting yet also discriminating tenor Soghomonyan possesses, and how well (if somewhat tremulously) Sonya Yoncheva suggested Desdemona’s innocence, compassion and faithfulness; the perfect marriage but for Iago’s soon-to-be-revealed two-faced iniquity.

Tension was evident at the beginning of the Second Act as Iago (friend and traitor in one) begins to put his black-hearted machinations into operation, feeding on Cassio’s disquiet (he has been demoted, for drunkenness and brawling) and his own jealousy of Otello, Luca Salsi coming into his own as his boss’s nemesis and a malevolent monster in his own right, snarling, calling for Satan’s help. Some respite though when we were serenaded by angelic children and a troupe of strolling players, a sextet of mandolins and guitars, Otello and Desdemona holding hands, amidst lilacs and roses; how expressive the music-making … however, calamity is just around the corner, and hinges on a planted-by-Iago handkerchief of his wife’s that for Otello incriminates the totally guiltless Desdemona (her assumed infidelity with Cassio, and, coincidentally, she had asked for his reinstatement), his confidence in her easily dented, Iago exploiting Otello’s weaknesses, goading him to take action; how thrilling the dark-edgy Berlin brass at the Act’s close was, capturing the moment ideally. 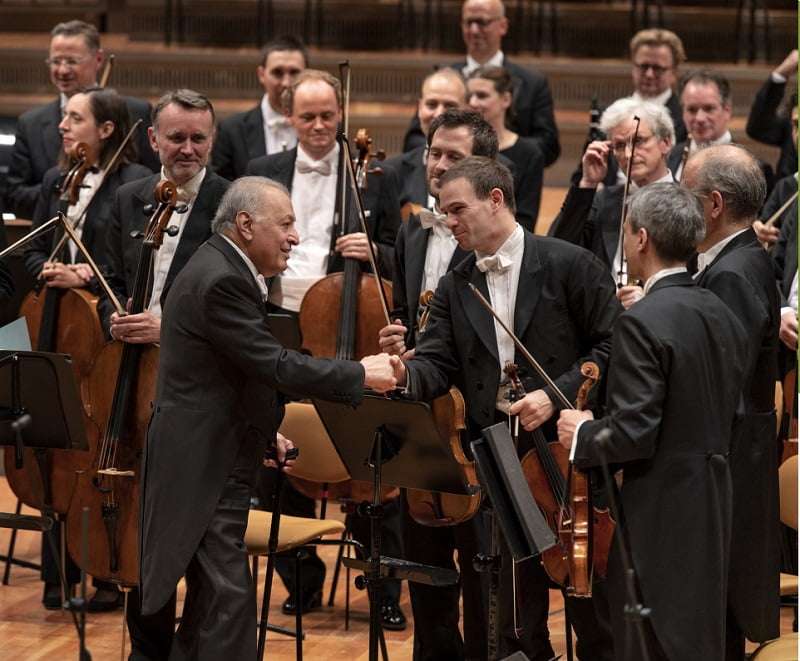 Act Three, something surreptitious and sinister in the air, for all the pageant surrounding the impending arrival of ambassadors from Cyprus (trumpets shall sound from the ramparts), as the duplicitous Iago continues his plot and Otello and Desdemona converse, he suspicious, she unnerved by her husband’s behaviour, his “stern and terrifying eyes”. In a soliloquy Otello’s spirits sink to the depths, tormented; Soghomonyan heart-rending. Otello, trusting of Iago, makes him Captain, the dignitaries arrive (a resounding moment) while intrigue continues, Desdemona “stricken in the livid mud … agony in my heart”. Once again Berlin brass rounded things off; balefully this time.

The final Act opened with an eloquent cor anglais solo and other beguiling woodwinds; cue Desdemona, prior to retiring, and with premonitions abounding, asking maid Emilia for her wedding dress, she wishes to be buried in it, and expressing her deepest feelings in the ‘Willow Song & Ave Maria’, Yoncheva holding the room (thankfully Verdi through-composed this opera allowing no ruinous clapping to break the intense atmosphere; Verdi’s sullen double bass continuation is so effective). Meanwhile Otello enters; he wants her blood; she pleads her innocence in vain; he strangles her, and as the truth unravels and finally dawns on him Otello takes his own life with his dagger.

However Robert Wilson directed it at Baden-Baden, this Otello stood up remarkably well as a concert – conducted masterfully (Mehta turns eighty-three the following day, April 29), played superbly, sung marvellously, the singers benefitting from the staging – for, ultimately, it’s all in the music. Excellent camerawork and sound.