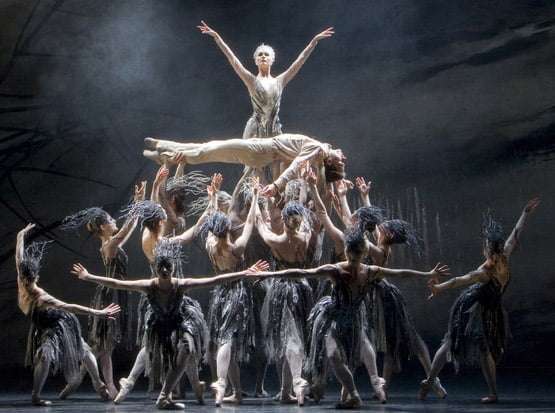 Lachlan Monaghan took centre-stage in a welcome revival of Michael Corder’s Le Baiser de la fée. While it was of more than passing interest to compare this version with the recently performed revival at Covent Garden of Kenneth MacMillan’s, it is puzzling scheduling that, after such a long time since either was last seen, both were offered in London within days if each other. Corder remains an undervalued choreographer, a name often missed out when British dance-makers are listed, and yet, the quality of his choreographic more than stands comparison with anyone active today.

Ample evidence of the quality of his work is provided by this ballet – it is essentially an extended divertissement, a showcase for his dancers, rather than an opportunity to offer psychological insight. In this, it is more The Sleeping Beauty than Giselle, a beautiful setting for some impressive neo-classical dancing – and most welcome for that. The ballet looks beautiful in John Macfarlane’s simple settings, which contrast with his delightful costumes and which flatter the dancers. Certainly, Birmingham’s dancers look very at home in this work, relishing the challenges which pepper Corder’s choreography – he demands those two attributes which used to characterise the English style: speed and precision. He loves filigree footwork, extravagant upper bodies and a fleet quality in everything his dancers do.

Monaghan works very hard as The Young Man, tirelessly so, as a demanding solo in the Bride’s house is followed by a complicated duet with her, and then on into an extended episode with the Fairy who wishes to whisk him away for herself. In it all, he impressed with his strong, easy physicality and neat classicism. He was matched by the dainty Momoko Hirata, whose dancing is crystal-clear, sharp, precise, yet tempered with a delicate femininity. She and Monaghan make a handsome and well-matched stage partnership. Strong but curiously bland was Jenna Robert’s Fairy who flashed with suitable brilliance but who projected little – there was nothing of the Fairy’s supernatural implacability. To hear again Stravinsky’s score, his homage to Tchaikovsky and the Imperial ballet, was most welcome, especially in the spirited rendition by Paul Murphy and the orchestra. 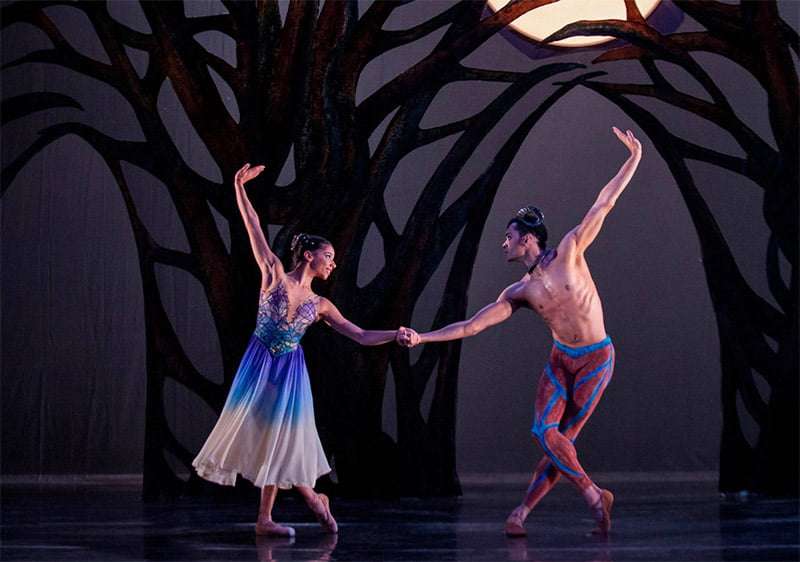 Of especial interest, the music for Ruth Brill’s Arcadia, a work by saxophonist John Harle in which the composer himself played the solo. Full of folk, jazz, Klezmer and middle-eastern flavours, it is a bright, intriguing composition that does not, however, always sit easily with Brill’s choreography. For Brill, a First Artist dancer in the company, Arcadia represents her first major commission, and BRB is to be commended for the having given such support – Atena Ameri’s simple but effective set and costumes, Harle’s music and an emphatic lighting design from Peter Teigen. Brill chooses the story of Pan whose half-human, half-bestial wildness are tamed by a benign Selene, Goddess of the Moon, and allows him to become a loved and just ruler of Arcadia.

As a narrative, Arcadia is pretty thin, and the choreographer does not always achieve what she sets out to do – the final happy celebrations of Arcadians, nymphs and Pan himself see her in suitably balletic knees-up mode, but the initial scene which should perhaps show the unbridled spreader of ‘panic’ is instead an episode of rather tame head-swaying, body undulation and a spot of mild nymph-gazing for the admirable Brandon Lawrence, who comes across more as slightly naughty rather than dirty young goat. Brill is also less than certain in her use of the small corps de ballet who remain largely earth-bound and indulge in musically-obvious synchronised semaphore rather than meaningful gesture. Céline Gittens is a suitably cool Moon goddess who indulges in some low-key taming of the young demi-god, but all to good effect in end.

To finish, Bintley’s now venerable eco-ballet, ‘Still Life’ at the Penguin Café, created in 1988 for The Royal Ballet. In it, Bintley deftly uses the vignette structure for a ballet, so beloved of Frederick Ashton, to highlight the threat to certain endangered species, the atmosphere slowly darkening as ecological disaster approaches. It was striking back in the late 1980s and maintains its place in the repertoire because it is a good programme closer, but its message is now mainstream, its effect diminished. A certain routine quality can creep in with this ballet, as the dancers are essentially ciphers, for most of them, with heads entirely masked, their characterisation existing only in the moves dreamt up by the choreographer. But it remains generally jolly stuff, and the current generation of BRB artists bring verve to what they do even if the ballet is now more entertainment than a cri de cœur for the destruction of the world’s fauna and their habitats.