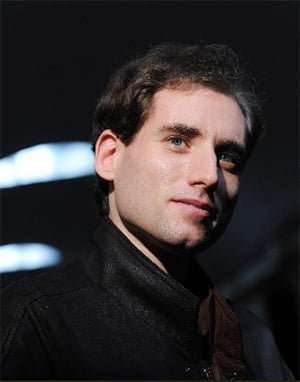 We were ushered into the Queen Elizabeth Hall by Ian McKellen’s pre-recorded dulcet tones; had we taken his countdown in minutes seriously then Boris Giltburg’s recital would have started early. As it was, it started late, after another of McKellen’s roles – requesting the extinguishing of mobile phones – had stalled twice before the full beauty of his message rang out. Giltburg, surrounded by cameras and microphones – thank god it wasn’t for a distracting ‘big screen’ – devoted the first half of the concert to the Ten Preludes that are collected as Rachmaninov’s Opus 23. He opened in dreamily romantic style (the reverie soon punctuated by something electronic!). With the familiar B flat Prelude (No.2), Giltburg’s nobility and poise were impressive. The Fazioli piano was less happy-sounding though, lacking body in fortissimos, weight in the bass, and somewhat edgy in the treble. At lower dynamics, the instrument’s wiry clarity was more agreeable. If Giltburg’s playing of the B minor (No.4) was of supreme sensitivity, and he approached the march rhythms of the G minor (No.5) with stealth, he didn’t always penetrate to the core of these pieces, as lovingly tailored as they were; sometimes immaculate performance, as Giltburg’s undoubtedly was, can be a veneer. For all his refinement and subtlety, character and fantasy were in lesser supply; thus Preludes 7 to 9 had sameness about them. The final one, the G flat, was softly meditative and rapt, compelling in its concentration, but this whole span of 40 minutes had not always invited full attention.

Prokofiev’s Piano Sonata No.8 (completed in 1944) is the last of the trilogy of his so-called “War Sonatas”. Of the three it is musically and emotionally the most complex of them. Giltburg rightly took a while before he started the work, to ensure his composure, and unfurled the opening Andante dolce at a very leisurely pace, too leisurely, for tension was lacking. Beauty predominated, but there was no Beast, for the contrasting Allegro moderato section (thus the first movement is built on such alternations) lacked for combativeness, for all the verve, energy and declamation expounded on it. The second, somewhat oblique, movement (marked Andante sognando) found Giltburg at-one with this tender and laidback music. He launched incisively into the finale, his astounding and tenacious playing to the fore, the coda propelled to a pealing and thunderous victory, yet not without suggesting we had slipped into showpiece territory; lacking was a suggestion of circumstance.

The ‘showpiece’ epithet is better reserved for Ravel’s La valse, which in its piano version cannot hold a candle to its orchestral brother. Giltburg rarely suggested darkness and catastrophe, but the piece, culminating in showy glissandos, is anyway more about virtuosity, supplied in abundance and fabulously by Giltburg. He offered three encores. Sibelius’s Valse triste is also best-known in terms of the orchestra; for piano it becomes something of a silent-movie soundtrack at its climax; but Giltburg gave it with an appropriate veiled sonority and the utmost sympathy. Then Rachmaninov’s Etude-tableau in A minor (Opus 39/6) was a thrilling ride, followed by Giltburg’s transcription of George Gershwin’s ‘That certain feeling’, brought off with infectious wit and innate style.