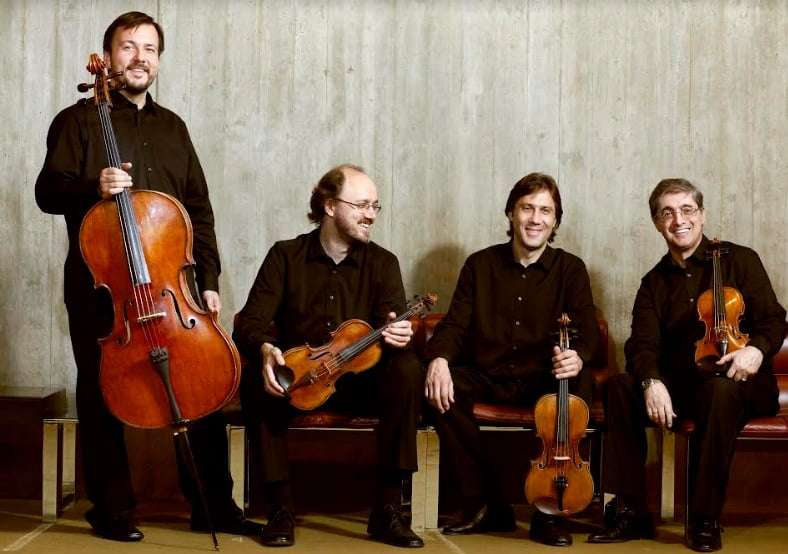 Since its formation in 1945, the Borodin Quartet has maintained the tradition of excellence established by past members such as Valentin Berlinsky, Rudolf Barshai, Dmitri Shebalin and Mstislav Rostropovich.

The Tchaikovsky, for piano and arranged by the Borodin Quartet’s founding violinist Rostislav Dubinsky, consists of twenty-four brief pieces that take us from the tender ‘Morning Prayer’ and the crisp ‘Winter Morning’ to the solemn chanting of ‘At Church’, thus rounding out a full day’s activities. In between are several pieces that describe childhood memories of Mamma and playthings, and a series of tunes and dances identified with various European locales that give way to bedtime stories. Although the Borodin players revised the order of some of these vignettes their reading was simply splendid, finding just the right character and spirit.

Next, Schubert’s Quartettsatz, which was intended to be the first movement of a String Quartet, and contains some of his most poignant, heartrending music. Many structural and harmonic ambiguities indicate that Schubert’s compositional style was in transition during 1820; he began but never completed a slow movement. This reading was flexible in phrasing and intensely vital in dramatic content with expressive nuances judiciously applied.

The Borodin ensemble has long been associated with Shostakovich, giving his Quartet output an appropriate earthy and gritty quality fuelled by instinctive understanding. Although Shostakovich’s music can be witty, sometimes even full of fun, these characteristics are often laden with a layer of disconcerting vagueness, as if restrained by personal trials.

Take the Sixth String Quartet, written about three years after Stalin’s death. Although for the most part it appears refreshingly trouble-free, its good humor is sometimes tainted by a disconcerting harmonic overlay. Even the breezy theme of the opening Allegretto holds back from expressing unrestrained cheerfulness, and the meditative slow movement has an air of mystery, of profound suffering below the surface. It was this underlying disquiet that made this performance impressive.

The Thirteenth String Quartet, 1970, is in contrast with the resplendent conclusion of its predecessor. It is a single-movement Adagio with a central section marked to be played at double the speed of the opening. A twelve-tone row played on the viola creates a doleful mood, soon infested with strong dissonances. Shuddering tripartite trills send shivers down the spine and in the closing section the viola reprises the opening theme as first-violin climbs upward as if seeking a higher realm. The Borodin members came to grips with this unremittingly bleak work – harsh, eerie, plaintive.

As an encore Tchaikovsky’s Andante cantabile from his First String Quartet was soothing to follow the gloomy conjuring of Shostakovich.