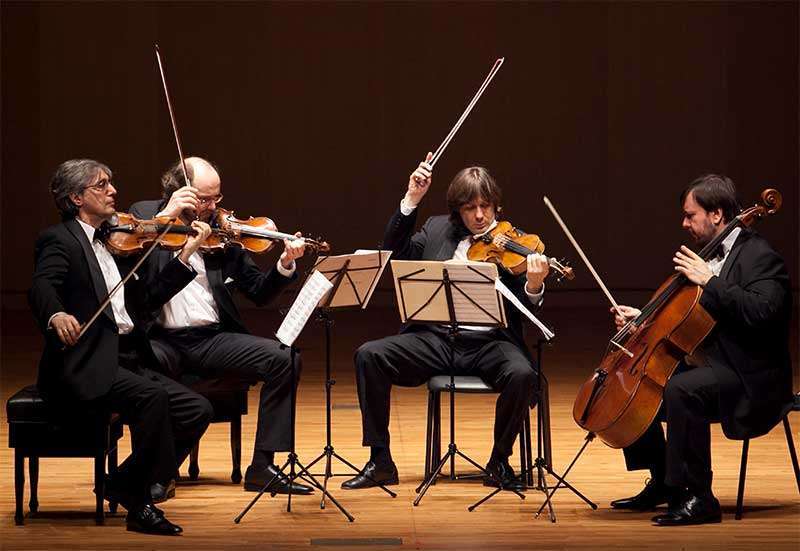 What a pleasure it is to listen to the Borodin Quartet! More of a pleasure, perhaps, than at any other time in its 70-year existence. I go back a long way with this ensemble, to the first line-up that was named after the composer – Dubinsky, Alexandrov, Shebalin and Berlinsky. Both Dubinsky, an unbearably narcissistic player, and the second leader, Mikhail Kopelman, were inclined to draw attention to themselves rather than the music; and the group developed annoying mannerisms which the long-serving cellist Berlinsky seemed determined to preserve.

The first-violin since 1996, Ruben Aharonian, admitted to me a few years ago that it had taken him some time to adjust to quartet-playing, after being a soloist; but it seems to me that he is the best Borodin leader so far. The violist joined in the same year, the cellist in 2007 and the second violinist, the most recent recruit, in 2011, so we now hear a completely post-Berlinsky formation.

Gone are the mannerisms. Aharonian might strike some people as slightly dry, from his appearance: he sits upright and quite still, concentrating all his energy on the place where it matters, the contact between bow and string. He may, at times of stress, throw his head back slightly, but otherwise he is admirably restrained in his gestures. His colleagues, especially Naidin, may be a little more demonstrative but they do not throw themselves about or wave their bows in the air. The main gainers from the new dispensation are surely the two composers the Borodin Quartet is playing at Wigmore Hall over three seasons, Beethoven and Shostakovich.

To start with Beethoven, although I heard memorable performances of him under both Dubinsky and Kopelman, they were always slightly exotic in character. The reading of the ‘Harp’ Quartet confirmed my impressions of accounts under Aharonian: the group is now solidly in the mainstream of European quartet-playing. The precision, the beautiful tone and the sonorous chording remain but the entire ethos is much more natural. I loved the power and drive of the opening Allegro but it was the Adagio that really drew me in. Like other listeners, perhaps, I have certain staging points in this movement which I want to hear played with great inwardness, and Aharonian’s cantilena had just the right quality to make them tell. The Presto Scherzo was marvellously robust and the Finale’s variations beautifully played, not least that for viola.

I remember a reading of Shostakovich’s Sixth from the Kopelman days in which the second violinist broke a string, then the violist broke one. Each time the players started the first movement again, with perfect precision. Nothing like that happened at Wigmore Hall. From the vehemence of the viola’s first notes we knew that we were in for a serious exposition of music that has sometimes been considered one of the composer’s lighter essays. The passacaglia which forms the third movement was very gravely placed before us, and its return towards the end of the finale was memorably voiced. Again, the traits that often disfigured the Borodin Quartet’s playing of Shostakovich were absent.

As a whole, the performance almost made me wish to hear two works by Shostakovich and one by Beethoven. But then, in the second half, we were offered Beethoven’s wonderful F-major. Beethoven was nearing 30 when he finished the Opus 18 set of six String Quartets, and this first – written second – was subjected to a thorough revision before Beethoven finally let it out of his sight. The Borodin members gave full value in the Allegro, but again it was in the slow movement that the rendition found its finest moments: I could allow this lovely creation to pass slowly by, secure in the knowledge that the players would not let me down. The beauty of the individual contributions, especially that of the leader, was exceptional. The Scherzo was rumbustious and only in the finale was there a slight twinge of disappointment: it was well enough done, but the players might have teased it a little along the way. Dynamics were nicely varied throughout the evening but, especially in the Wigmore acoustic, pianissimos could have been taken down even further.

I have spent much of the past fortnight writing about the late Peter Cropper. This was not his kind of concert but, in its own more-meticulous way, it was deeply satisfying.