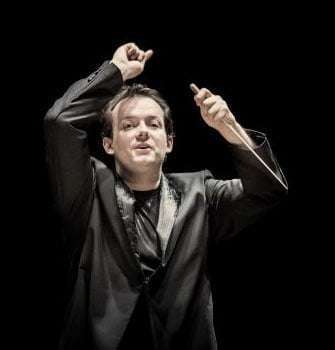 One might wonder why a Symphony such as Mahler’s Sixth, with its hammer-blows of fate and the explosion on an A minor chord as a final pronouncement of humanity’s tragic fate, has become increasingly attractive to audiences. Many noted Mahler conductors, including Bruno Walter and Otto Klemperer, kept their distance. Mahler himself was terrified by what he had wrought. He is said to have conducted the premiere badly, for fear of succumbing to the terrifying emotions that the Symphony can provoke. Yet far from heavy-laden or morose, most of the music in the Sixth is full of life, expressing courage in the face of life’s challenges and amazing resilience when confronted with the inevitability of death. In a world reeling from unremitting tragedies, Mahler’s Sixth may have a cathartic effect.

It was precisely the concentration on heroic resilience and relentless vitality that made this performance so impressive. Andris Nelsons urged the Boston Symphony Orchestra to invigorate the outer movements with incessant urgency and imbued the thematic material with ardent passion. Avoiding extreme tempos and unnecessary affectations, his view of the score was basically straightforward. He strove to bring out inner voices that can easily be drowned in the profusion of sound that make climactic passages so overwhelming. Nelsons was not always successful in this endeavor, but his efforts were admirable.

The BSO played superbly. The strings infused lyrical passages with ardor, brass produced a strong, brilliant sound – even if the piercing sound of the first trumpet protruded too often – and the woodwinds’ incisive articulation enhanced the flitting character of the minuet-like Trio in the Scherzo. As for the order of the middle movements, a matter still in dispute, Nelsons played the Scherzo before the Andante, a controversial decision that demonstrates his independence in the face of the evidence (see the link below) and that an increasing number of conductors now prefer the reverse order. However, placing the Scherzo second reinforces the mimetic character of its opening drumbeat (with its emphasis on the third beat rather than the first) as a mocking imitation of the first movement’s stalwart march. This positioning also enables the Andante to function as a calming interlude before the powerful finale; its poignant nostalgia sets up the drama that follows.

A few moments are worth mentioning. Nelsons’s treatment of the chorale passage between the two principal subjects of the first movement was exquisitely shaped, rather than merely whizzed through, but what seemed an attempt to make the Scherzo’s quasi-minuet sound coy and flirtatious didn’t quite come off, although the yawning brass that ushers in the reprise of the Trio added a humorous touch and the low growls in trombone and tuba sounded ferocious. In the Andante, after a gracefully shaped opening theme, Robert Sheena’s English horn solo was hauntingly beautiful. Later, principal horn James Sommerville made his instrument sound like a human voice.

The opening of the finale has rarely sounded so chilling, enhanced by Nelsons’s spacious approach. Although the two hammer-blows were devastating, the wildly racing passages that follow were even more so, as if trying to escape such tragic presentiment. Nelsons urged the music forward with such heightened force that it became excruciating over long stretches, bordering on the suicidal. After the somber, shadowy brass chorale based on fragments of the finale’s main theme sank into the depths, Nelsons allowed the low-A in cellos and bass clarinet to slowly die away and end with a pause just before the A minor chord broke the silence, a “slap in the face” to quote Benjamin Zander. The audience seemed in shock.